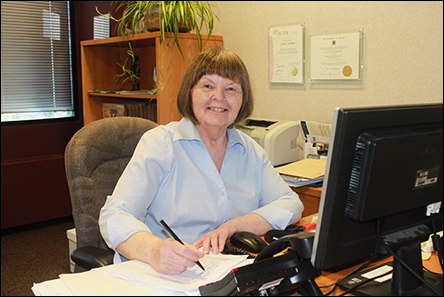 Lynda, Basic Needs Coordinator at Distress Centre, has assisted Anne* in many ways, but says it’s up to the clients to make change in their lives.

Anne* called our 211 line in June, 2013 looking for housing assistance.

She needed to find a place for herself and her young child to live by July 1, 2013 and was having trouble finding affordable housing in Calgary’s tight housing and rental market.

Then on June 21, 2013, Calgary was hit with the worst flood in Alberta’s history.  Finding a place to live went from an exceedingly difficult task to an almost impossible one.

“How was I going to deal with this?” Anne recalls, describing the city as in shambles after the flood. “I didn’t have a job and I have a little one.  I was in turmoil.”

The 211 operator advised her to call our 24 hour crisis line and from there she was put in contact with Lynda, Basic Needs Coordinator at Distress Centre.

Lynda assisted Anne by facilitating a move of her things from her current place of residence, where she could no longer live, to a new home. Unfortunately her stay in a shared accommodation was short-lived.   Her move in had not been approved by the landlord.

That is when she found herself at a shelter, where she lived until she was moved to another shelter for families.

It’s been a chaotic year for Anne and her child, and she says she is grateful to Lynda for the support she has provided.

“She encourages me to keep going forward,” Anne says.

Lynda co-ordinates the distribution of the Basic Needs Fund at Distress Centre. Funding is most often given to those with low or no income.  They have no other way to pay their bill and are facing immediate disconnection of utilities or eviction from their housing.

Anne traveled from another country to Canada in 2008 to be with her husband who had come to Canada the year before.  Anne said that her husband became abusive after she moved to Canada. This led Anne and her child, who was born in 2009, to a shelter in Banff. From there she has bounced from shelter to shelter. She currently resides in a shelter for families in Calgary.

For the last year, she has looked to Lynda, for information, resources, support and as a person to listen and talk to.

“With the exceptional circumstances much of which is based on basic needs, I have worked with Anne through more sessions than I would normally with one client,” Lynda says. “Usually clients that I see have one or two appointments with me and they may set up an appointment with another counsellor if necessary. Distress Centre is often the first point of contact for someone in crisis, and from Distress Centre they are directed to more long-term support if counsellor and client agree that would be useful.”

Lynda has provided additional support for Anne because of Anne’s lack of access to income and Anne’s sole responsibility for her young child as well as not having any personal supports to turn to.

Anne recalls one time when she’d had a poor experience working as a live-in nanny, and came home to find herself locked out of the house, with her possessions still inside. Anne called Lynda and Lynda helped. “When that employer said she was going to take our belongings to the dump, Lynda ensured that our belongings were safe and moved.”

Lynda has also helped Anne tailor her resume to apply for jobs, and helped her to find childcare for her child with the respite program.

“When I’m frustrated and don’t know what to do anymore I call Lynda and she helps me unwind and calm down,” Anne says. “After I talk with Lynda I see things clearly. After I talk with her I am able to deal with the problem better than I could before.”

Lynda emphasizes that although she offers support, it is up to the client to make change in their life: “I help with paying bills but together, the clients and I determine what they can do to help themselves and I assist with resources that might be useful to approach,” Lynda says.

Now, over a year after first connecting with Distress Centre, Anne still has some struggles in her life. Her husband left Canada for a vacation and could not return because he now had a criminal record related to the domestic violence. He stopped paying support. Anne can no longer go back to her country for fear that her child will be taken away from her.

She still resides with her child in a shelter for families while she is breaking into her field.

“When I first met Anne, she was discouraged and vulnerable,” Lynda says. “I have listened to her and I think that listening, being respectful and being available have helped her to regain confidence, become more familiar with the Canadian culture and I think this support has also helped her to be more positive about her future.”

*not her real name

Anne* learned about Distress Centre when she was living in a shelter in Calgary, months before she actually picked up the phone and called 211.

She says she didn’t call because as an immigrant she felt Distress Centre would not be able to help her.

We would like to stress that our crisis services are for all Calgarians, including immigrants, temporary foreign workers and refugees.

We can provide support in over 200 languages and are available 24 hours a day, 365 days a year.

*not her real name