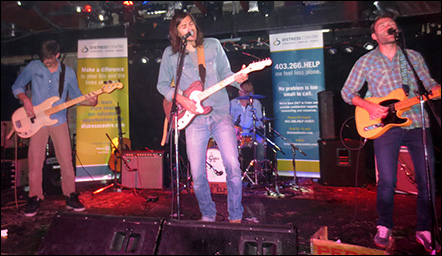 The Wild Elms were one of six bands that performed at the event.

Hundreds came out to Dickens Pub on August 23 to attend Listen Up! Calgary and enjoy live, local music while supporting Distress Centre.

All proceeds from ticket sales, the silent auction and a 50/50 raffle went directly to Distress Centre and totaled over $4000! The money will ensure that we can continue to provide 24 crisis support to Calgarians in need.

The event was organized by Rich Paxton who is both a Distress Centre volunteer and lead singer of the band, Free the Cynics, who performed at the event.

Rich said he decided to organize the event when he realized a lot of his friends were not aware of Distress Centre and its services.

He said he wanted the event to be a great night out for everyone involved, but also wanted to raise awareness and “a truck full of money too!”

The stage was also graced by bands, The Wild Elms, Barely Zebra, The Penny Auction, Susie Forsyth and Chad Brown.

Distress Centre information was handed out as patrons walked in, signage displayed where people could seek help, and many of the performers spoke about the importance of agencies like Distress Centre.

Susie Forsyth played a heart-felt song she wrote from the point of view of one of her friends who had a close friend die by suicide.

A silent auction featured prizes such as a painting, a statue, rounds of golf, comedy club tickets, and a guitar signed by local celebrities and musicians, The Dudes.

Rich Paxton (center) organized Listen Up! Calgary. He is a Distress Centre volunteer and lead singer of Free the Cynics who performed at the event.