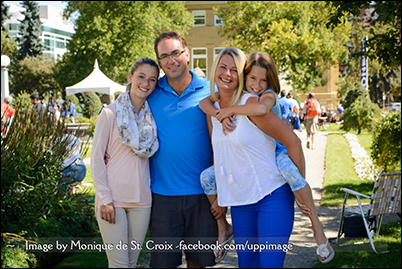 In October 2004, Lee Horbachewski was on the brink of taking her own life. She was suffering from post-partum depression after the birth of her second daughter and felt she could not go on.

She sealed herself in her bedroom with bottles of prescription pills and, crying hysterically, began to open each one.* In a moment of clarity she set them aside and instead picked up the phone and called our 24-hour crisis line.

That call for help was the first step in Lee’s journey towards healing and now, ten years later, Lee and her family are not only huge advocates for our centre and the work that we do, but also financial sponsors.

Lee speaks openly about her struggles with depression and mental illness. She frequently utilizes her large online following to bring awareness to Distress Centre and mental health. In June, 2014 she used the occasion of her birthday to ask for donations to our ConnecTeen program and raised $10,000.

“I just wanted to say thank you and to let other people know that when they are so dark and think there is no one there, Distress Centre is there, and they’re there 24 hours a day,” Lee told the Calgary Herald.

At the National Philanthropy Day Luncheon on November 14, 2014, at the BMO Centre, Lee spoke with host Dave Kelly about how their generosity has truly been a family effort: “It really is this family unit. Without the support and foundation my husband Neil has provided, and the forgiveness and beauty that my daughters have given me, we would not be able to give back as much as we do to Distress Centre.”

The importance that Neil and Lee put on generosity has clearly had an effect on their daughters, Aubrey, 15, and Taryn, 11. Both volunteer their time at the Invermere Care Companion Animal Network, a volunteer-run shelter in Invermere, B.C. For her 14th birthday, Aubrey asked for donations to the shelter instead of gifts, and raised more than $4,000.

Distress Centre was honoured to celebrate with the family at the National Philanthropy Day luncheon at the BMO Centre on November 14, 2014. We are lucky to have them as supporters and advocates of our crisis services. No one is more deserving of this recognition.

*Find out more about Lee’s amazing journey in her book, A Quiet Strong Voice.