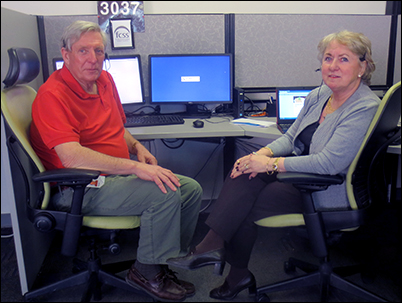 George and Donna Coutts have been happily married for 46 years since meeting on a blind date in Estevan, Saskatchewan. For most of their married life they have been globetrotting the world working and living in 13 countries over 35 years.  They both hail from Saskatchewan, but only George is a Saskatchewan Roughrider fan!

George and Donna are the ultimate volunteers. They are always willing to take on additional shifts when called upon, and in fact, you can see George’s smiling face most mornings in our contact centre. They have been volunteering at Distress Centre for 8 years, and because they are older – Donna is 64 and George is 67 – they both agree they are comfortable doing what they do.

They come by volunteering on crisis lines honestly.  When George & Donna became empty-nesters in 1987, Donna volunteered on the crisis lines in Grande Prairie while George continued to work. George worked and travelled abroad for over 35 years with Schlumberger and Weatherford International leaving Donna with a lot of time on her hands.

In 2004 they finally put down their roots in Calgary they both volunteered for the Telecare Christian Crisis line, but a lack of volunteers eventually meant they had to close their doors.

One day George was riding the C-Train and he saw an ad for Distress Centre. He phoned to inquire about volunteering and both he and Donna made an appointment for an interview.   They took the training together, completed the training shifts and were chosen as part of the volunteer team in 2007.

Until his retirement in 2013 George did the early morning shift. Now both of them volunteer at least one days a week (if not more), as well assisting in training new volunteers by doing role plays and coaching shifts.

When asked what motivates them George says, “It’s the listening. The helping is in the listening because it doesn’t take away the caller’s power.”

Donna interjects by saying that “because we can’t give advice, we listen, and the caller is just so grateful you didn’t minimize their distress.”

They are both loyal to Distress Centre not only as volunteers but as donors.

“I can’t imagine not working here,” says Donna. “Life is meaningless if we don’t do this because we are both so blessed with a good life.”

Volunteer with Distress Centre and make a difference in the lives of others. Learn more and apply here.