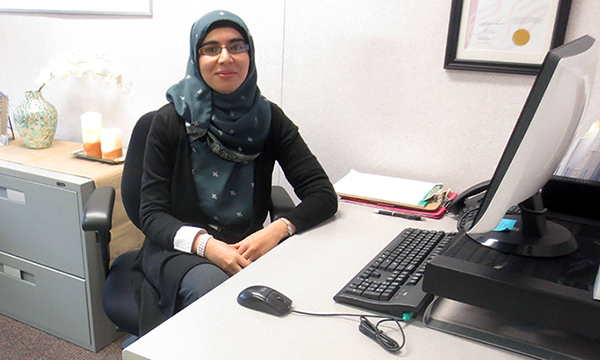 From volunteer to counsellor, Shehla Shukoor finds her home at Distress Centre

When Shehla Shukoor moved to Calgary two years ago fresh off a Master’s degree in Social Work, she was in search of a place she could best apply her knowledge. As she began to meet people and inquire about opportunities for her, she started hearing more and more about an organization called Distress Centre Calgary.

Many people were telling her to look into volunteering on the crisis lines, saying it would give her the broad range of experience she was looking to gain. Curious, she joined Distress Centre as a crisis-line volunteer. A year and a half later, Shehla is our newest crisis counsellor!

Although curiosity about the agency brought her to Distress Centre, Shehla says what’s made her stay is the support she’s received from fellow volunteers and staff.

Shehla attributes her growth from volunteer to Contact Centre Coordinator to Crisis Counsellor, to the team-based environment at Distress Centre. In all her roles, she says she received guidance and support from supervisors and colleagues to help her become more competent and effective at her job. She says it was more than just “doing something you’re given to do,” it was about building your skills and knowledge to make you the best you could be.

Knowing the importance this support has had on her own growth, Shehla believes that being able to provide support for those in crisis is essential.

“When somebody calls [Distress Centre] they’re being vulnerable. It takes so much strength. It’s not easy for them to say what’s going on.”

She elaborates on the role of the crisis counsellor: “It’s about being there in that moment, hearing them out without judging them, and just listening. It’s about doing your best to let them know that there is hope.”

When an individual seeks crisis counselling it’s because something has happened in their life, typically within the past 2 to 3 months that has negatively impacted their normal state of being. Crisis counselling is meant to be short term and restorative. The counsellor supports those in crisis and works towards restoring the individual to how they were before the crisis occurred.

Counselling seems to be a natural fit for Shehla, who was initially drawn the profession because it aligned with her own values: quality, diversity and most importantly – compassion. These are values she hopes to instill in her work.

“When someone is in distress you don’t have to be an expert. You don’t have to have the perfect answer for them. Just being there, showing compassion and being non-judgmental is huge.”
Even though the job can be stressful at times, Shehla more often finds inspiration from those in crisis.

“Anybody can be in that situation. You don’t necessarily have to go through that experience yourself, but just hearing what they’ve gone through and hearing their strength and determination, and that they want to get through this really grounds you as a human being.”

Becoming a counsellor was Shehla’s ultimate dream. As she grows in her position, she can’t help but reflect on her journey.

“Coming in, this role really appealed to me, but I realized I first have to get to know the crisis lines and answer the lines.” She says, “I started as a volunteer, became a coordinator and now I am a counsellor. I really liked being on the lines, but when you meet somebody in person you see that it’s more than just a voice, it’s actually a person who wants support.”

Shehla is thankful she can be the support for someone strong enough to say they need it.

Interested in receiving counselling? Call our crisis line at 403-266-4357 and ask for an intake to counselling.