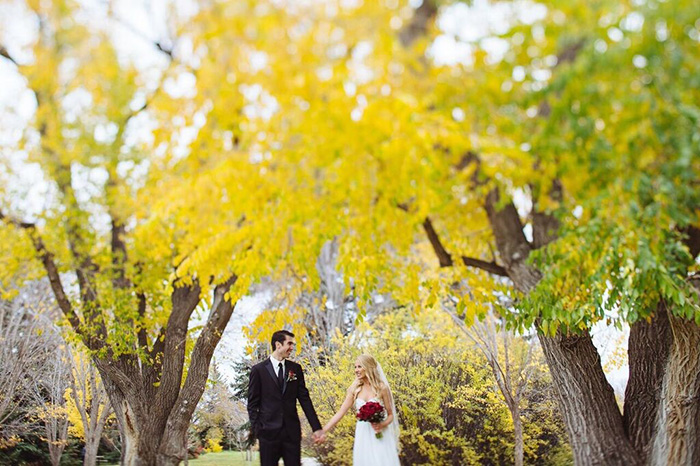 Falling in love in the crisis centre

Getting the bride and groom to kiss is a common and time-honoured wedding tradition. Usually this is done by tapping champagne glasses with flatware.

At Celia Kopperud and Matt Sticksl’s wedding reception in October of 2015, they asked guests to make a donation to Distress Centre Calgary if they wanted to see the pair smooch.

Three years earlier, Matt and Celia sat down as strangers for their first night of Distress Centre crisis line volunteer training with no idea that they would marry each other a few years later.

Celia was attending Mount Royal University at the time, completing a degree in psychology. She applied to volunteer at Distress Centre to get some hands on experience in her field of interest.

Matt was considering a career change and was drawn to both counselling and teaching. He was taking the time to explore both fields and felt that volunteering on our crisis lines was a good opportunity to get a feel for counselling.

Though they were in the same training group, they only began talking to each other while sharing a shift in May 2012 and sitting in adjacent call booths.

Distress Centre prohibits our volunteers and staff from forming friendships with callers and clients, but we encourage staff and volunteers to socialize with each other when they are not taking a call. Many of our volunteers identify meeting new people as a highlight of their volunteer experience.

They chatted over the course of their shift, in between calls, and did so again when they had another shift together. Matt started using the scheduling system to plan his shifts around Celia’s to see her more. Unbeknownst to him, Celia was doing the same thing to secure shifts with Matt.

After a few shifts together, Matt made his move.

They went for pizza and afterwards Matt dropped Celia off at Distress Centre to complete another shift.

The two began dating in August 2012, but Matt moved to Lethbridge three weeks later to pursue a teaching degree at the University of Lethbridge. Over the course of the year he still managed to spend plenty of time in Calgary with Celia, and continued volunteering at Distress Centre.

Celia went on to become a leadership volunteer and said the experience is one she is still benefiting from.

“I went on to do my Masters of Counselling so [volunteering] was really good exposure to that sort of world and I really liked it,” she explained. “You go into it thinking you’re going to help people. But really I think it helped me too. It opened my eyes to everything that’s going on in the city. And it’s such a supportive atmosphere. I haven’t come across this type of place anywhere else that I’ve worked or volunteered at.”

The couple also said their training and experiences at Distress Centre helped them solve problems in their lives and in their relationship.

“We said we would ‘DC’ each other if one of us was escalating,” Celia laughs. “It was nice because we could speak the same language.”

In December of 2014 Matt took Celia for a nice dinner. Afterwards, he gave her a box of chocolates with the ring case hidden inside and asked her to marry him. Celia said yes and they were married on October 3, 2015 at the Alazar Shrine Centre in Calgary.

Matt volunteered at DC for a year and half, and Celia for just over two years. They recruited several of their friends to volunteer, and wrote reference letters for their volunteer applications.

This includes the groomsman, a current volunteer, who collected the Distress Centre donations at the reception. They raised $100 to support our crisis services.

Matt is now teaching at an addiction day treatment program, and Celia is working as a support worker at an outreach school, as well as pursuing her Masters.

Distress Centre is incredibly fortunate to have dedicated volunteers like Celia and Matt.