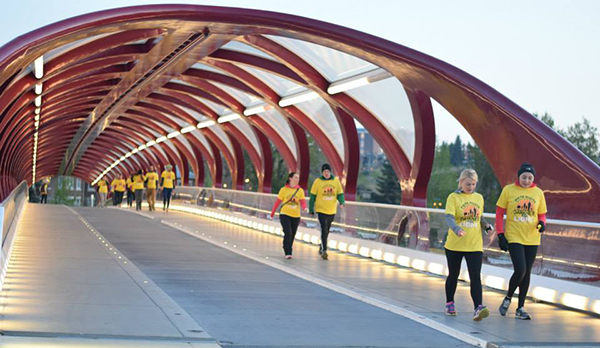 Walk or run with the rising sun and support suicide prevention

At the unthinkable hour of 5am on May 9, 2015, 200 people huddled together shivering in the crisp, early morning air, each wearing a bright yellow t-shirt with “Darkness Into Light” emblazoned across the front. The blackness of night was still upon them as the signal was given for the event to start and the group surged forward to walk, jog or run through beautiful Prince’s Island Park.

As the brightly-coloured group made their way to the finish line, with much conversation and laughter, the sun peaked slowly over the horizon. By the time the final participant had crossed the finish line, day had broken and sunlight poured over the flushed and excited crowd.

The event, Darkness Into Light, originated in Dublin, Ireland eight years ago with just a few hundred participants. It has expanded worldwide with over 110,000 thousand walking/running across Ireland and in four continents, all in support of Pieta House, suicide and self-harm crisis centres throughout Ireland. The first event took place in Calgary last year and was organized by Sharon Whelton. She chose Distress Centre as their local charity of choice to encourage Calgarians to get involved and show support for a local charity.

A group of chilly Darkness Into Light 2015 participants.

“Beginning the event in darkness and walking or running as the sun rises symbolizes that there’s hope for the future,” Sharon, an Ireland native, explained of the concept of the event. The event also fosters community and supporting one another as everyone is welcomed into the fold and encouraged to join a group to walk with.

Sharon moved from Ireland in 2012 and felt compelled to bring Darkness Into Light to Calgary after several people close to her had loved ones die by suicide. She had never organized a walk/run or any sort of event of this caliber but she said those deaths, as well as the huge stigma surrounding suicide in Ireland and beyond, “fueled a fire within” and motivated her to do something about it.

“There seems to be this stigma around mental health and suicide, especially in Ireland,” Sharon said. “There was quite a significant period of time where this was such an important and almost dramatic thing to experience at home. There was a lot of areas throughout the country, like certain areas in a town that had 4-5 deaths through suicide in a number of weeks and months. When you hear that kind of story it creates a drive within you.

“At this event we want to make people aware that they shouldn’t be afraid to talk to anyone no matter how small or insignificant you think their worries are,” she continued. “There’s always someone there to help you. [Distress Centre] is there 24/7 and there are friends and family. Never be afraid to speak out and break the stigma.”

The walk takes you on a beautiful route through Prince’s Island Park.

Now in its second year in Calgary, Sharon said they felt it was important to encourage more Calgarians to participate as it was largely Calgary’s Irish community that supported the event last year. Partnering with Distress Centre encourages Calgarians to get involved and Sharon says that she has already seen more diversity in the people who have signed up this year so far.

This year’s event takes place on Saturday, May 7. It’s not too late to register and experience this unique event.

“You’ll find it pretty difficult to find an event similar to what you experience at Darkness Into Light. There are events all over the city at normal times of the day,” Sharon laughed. “But the primary focus for us is to raise awareness for mental health and suicide prevention and to promote a more positive vibe and atmosphere around it.”