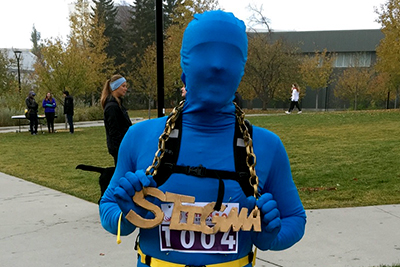 The Stigma, can you outrun him?

Outrun the Stigma was formed at the University of Calgary when Co-Founders Leah Shipton and Amy Li, leaders of the Distress Centre on Campus Club, noticed a gap in the running culture for runs that raise awareness for mental health.

In October 2013, the DC on Campus Club, together with the Mental Health Awareness Club, organized the first Outrun the Stigma to fill that gap. Each year Outrun the Stigma offers a 10km and 5km run/walk, they invite local community members to speak about their mental health experiences. They also host a Mental Health Expo involving local community organizations, businesses, and charities.

“It was incredible to see how the community rallied together to generate the success of Outrun the Stigma 2016,” Amanda said. “It was a huge statement to the continued growth of this event in future years.”

“Now in 2016, we continue to have the Distress Centre as our community partner because of the tremendous support and amazing relationships we have developed with Distress Centre,” Amanda said.

In May 2016 the club transitioned to a not-for-profit organization called Outrun the Stigma with the goal of expanding across Canada.

“We hope to not only grow Outrun the Stigma in Calgary, but to also kick start Outrun the Stigma runs in new cities across the country,” Amanda said. “We also want to expand our story sharing initiatives, providing online and in person platforms for story sharing that will begin to create a community that supports and advocates for mental health.”

Check out a few photos from the event: