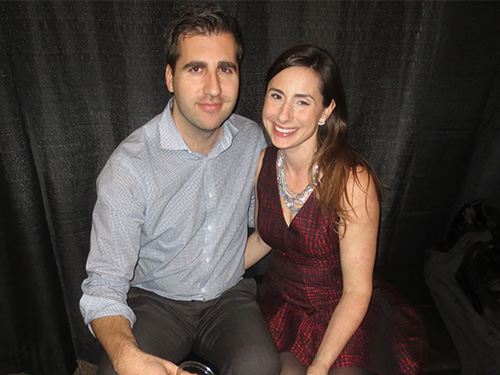 Michelle and her husband Peter Rowbotham at our 2015 Christmas Party.

When Michelle Wickerson came in to interview for a position at Distress Centre (DC), what would be her first job in the social work field after completing her bachelor’s degree at the University of Calgary in 2002, her interviewer, Joan Roy, had already filled the role.

“We were advertising for CCCs (Contact Centre Coordinators) and I had interviewed a number of people, and I interviewed Katie Ayres, who used to work here, and I fell in love with her right off the get go and hired her,” explained Joan, who is now Executive Director at DC.

“And then I got this email from Michelle and I didn’t have any more room, but I thought, well I’ll bring her in for an interview.

The position was already filled but Joan said she simply had to have her. She consulted with Executive Director, Barb Litchinsky, and decided to hire her as a relief CCC who provides extra coverage in the contact centre when needed.

“As soon as an open position came up we slotted her into full-time,” Joan said. “She was just so impressive.”

After working as a CCC for a couple of years she returned to Montreal to complete her Masters of Social Work and began working in Montreal. When the position of Volunteer Program Supervisor became available, Michelle’s name came up.

Barb said that Michelle seemed shocked when she called to offer her a job: “She was modest and didn’t even realize how exceptional she was as a social worker and staff member.”

She returned to DC as the Volunteer Program Supervisor in 2006, and spent the rest of her professional life at DC in a variety of roles including Communications Manager & Senior Manager of Communications & External Resources.

She went on maternity leave in 2013 and her and her husband Peter had their daughter, Norah, before returning as the Senior Manager of Organizational Performance in 2014, and finally as the Director of Innovation & Strategic Initiatives before she went on medical leave in January 2016.

She passed away on July 4, 2016 at the age of 35. Michelle was a beloved mother, wife, daughter, sister and friend, as well as an exceptional part of the Distress Centre team.

She brought a passion and drive to every role she worked in, every project she managed, and every person she worked with, supervised or mentored. With Michelle, there was no doing things half-way.

“Michelle was super fun-loving, funny and such a great story teller, but even with her private life or with her work, she attacked it. She just dove in there, it didn’t matter if it was snowboarding or rebranding, she went in and did it,” Joan said.

“She was all in,” Jerilyn Dressler, Director of Operations at DC added. “It was all or nothing with Michelle. She was all in to being a mom and being Peter’s partner, she was all in.”

Her impact at DC is immeasurable. She headed up the rebranding of DC and ConnecTeen in 2010, work which got her listed as one of Avenue Magazine’s Top 40 Under 40 in 2012. She pushed for the expansion of our online services, believing it was the future of crisis intervention.

Unveiling our rebranding at our 40th anniversary celebration in 2010.

In every role she took on she met and exceeded expectations, but she also saw the humour and fun in life. She headed up the disaster response committee and named it, “Team Apocalypse.”

Michelle and David Kirby, our Clinical Services Manager, made a soundtrack for Team Apocalypse, with songs like, “The End of the World as We Know It” and “The Eve of Destruction.”

Jerilyn believes that Michelle’s impact will be felt for years to come.

“That’s something that has been obvious to me as I’ve reflected on her life and her legacy. She is everywhere,” Jerilyn said. “You walk through this agency and her work is the rebranding, sometimes I hear her words coming out of my mouth, she was so passionate and so smart and had such an impact on us, who we are as an agency and who we are as people and professionals.”

Michelle with Distress Centre staff at the United Way parade in 2009.

The loss of Michelle has affected the staff at DC greatly. The nature of our work at DC and in the non-profit world often leads to close personal and professional connections.

“It is deeply personal work regardless of whether you’re a professional or you’re a volunteer because we’re here for a reason and we’re doing this work for a reason,” Jerilyn said. “We believe in this work, we’re passionate about this work and it’s difficult work, so we see each other every day and we connect on that level, and then to lose someone, it’s very difficult.”

We wanted a meaningful way to honour Michelle’s memory and her legacy, and from that yearning it was decided by the leadership team to rename the Distress Centre Calgary Award in Social Work to the Michelle Wickerson Memorial Award in Social Work. It is awarded yearly to a University of Calgary student who is interested in working in the area of crisis intervention.

“Her impact is not just about the work and projects that she did, it will continue to live on in the people that she worked with, supervised and mentored,” Jerilyn said. This scholarship helps to continue that impact.

Michelle was to be an integral part of DC’s future, and unfortunately, we have been robbed of that future. We are confident that we have the people to soldier on and continue to create a successful future for our agency, and part of that confidence comes from Michelle’s own belief in our work and in our people.

Before she went on medical leave, she left us with these words:

“I’m happy to step away for now knowing that you are all doing the stellar work that brings these vital service to our clients. Experiences like this in my life just remind me again and again how important the help Distress Centre provides is. Thank you for what you do to make that happen.”

We are so grateful to Michelle for everything she did during her 11 years here. We feel blessed to have had her in our lives. We miss her every day.

Donate to the Michelle Wickerson Memorial Award in Social Work.

Michelle with her mom, Diane Wickerson, and brother, Rob Wickerson, at a banquet in 2007.

Michelle with her daughter Norah at our office Halloween party in 2014.

Michelle with crisis line volunteer, Lorne Haggarty, at our 2013 Lend An Ear Breakfast.