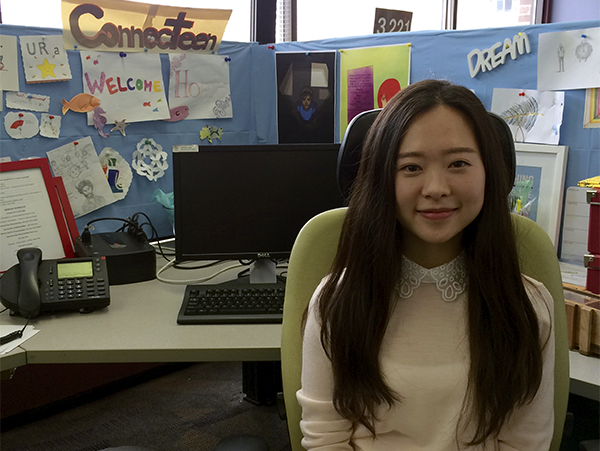 What it’s like to volunteer at ConnecTeen, Distress Centre’s teen crisis line

ConnecTeen volunteer, Grace Yoon, at the CT booth in our Contact Centre. Photo by Claris Kabasu.

ConnecTeen, a program of Distress Centre, provides confidential, non-judgemental peer support to Calgary teens by phone, text, chat and email. ConnecTeen also provides an opportunity for teens to have a meaningful and impactful volunteer experience. ConnecTeen volunteers are aged 15-20, around the same age as the teens calling, texting and chatting in, so they can better understand the issues they’re facing.

When Grace Yoon began volunteering at ConnecTeen three years ago, she was surprised to find that it’s not as hard as she thought it would be.

“I was worried that I would say the wrong thing or ruin someone’s life, but it’s not like that at all,” she explained.

“Just come as you are and you can help someone. You don’t have to come in with the mindset of saving lives – just being there for [clients] and listening to them is enough.”

Grace, who has now transitioned to the role of a leadership volunteer, said that she initially decided to get involved with ConnecTeen because she’s experienced difficult times herself and wants to help others in a similar position.

“I’ve been through a lot in my life, I’ve been misunderstood and I’ve experienced things not in the friendliest way so I wanted to help people get through that,” she said. “Coming from someone who’s been there, I wanted to give that support.”

Wentao Li began volunteering with ConnecTeen at the end of 2014 and agreed that responding to crisis calls, chats and texts is not as stressful as one might imagine.

“You’re basically having a conversation with someone your age, maybe a bit older or a bit younger, just listening to their issues. I thought it was really relaxing even though it seems like it would be stressful.”

Despite this attitude, Wentao has had instances where he felt he could’ve handled a call or problem better. ConnecTeen sees a lot more teens reaching out by text or chat, rather than phone, which is still the dominant way we’re reached on the Distress Centre lines. Because of this, Wentao said he finds calls stressful because he doesn’t have as much time to think before responding.

The first time Wentao ever received a phone call, it was a high risk call – a call where someone is in danger of being harmed, by themselves or someone else. During the call, he misinterpreted something the caller said.

“I took it the other way. Later I realized that I had made a mistake. I apologized and [the caller] accepted it and it was all good. But it was really scary because I thought, ‘I’ve just done something wrong. I’ve been bad to my caller.’”

Wentao says that when he reflects back on that call, he doesn’t think of it as a negative experience.

“I think that was more of a learning opportunity,” he said. “It showed that even if I make a mistake, I can still make a come-back and redeem myself.”

ConnecTeen volunteer, Ryan Costello, won the 2016 Youth of Distinction Award in the category of Peer Support.

Ryan Costello, 17, has volunteered with ConnecTeen since he was 15 and said he went in expecting to give back, but didn’t realize how much ConnecTeen would give back to him.

“When you think of volunteering you think, ‘I am giving and not getting anything back from it,’ but with ConnecTeen, what you receive from it, it’s just so amazing,” he said. “I feel like I am taking way more than I give.”

Developing skills is one of the greatest benefits of volunteering with ConnecTeen. Ryan said he’s noticed his communications skills have improved and he’s better at talking through tough situations. But he says what has impacted him most, is his increased ability to not judge someone or make assumptions based on what they look like.

“ConnecTeen helps me to know that each person has their own story,” Ryan said. “They’re more than just that they use drugs, or they’re pregnant or anti-social. There is so much more to someone. ConnecTeen really helps me to see that.”

Ryan said he also enjoys getting involved outside the lines. He attends team meetings, the ConnecTeen Christmas party and the annual Volunteer Appreciation Event. This year he decided to support ConnecTeen in a completely new way, by entering our recent youth video contest.

His video was chosen as the winner and you can watch it on the Jumbotron at the March 12th Calgary Hitmen game in support of ConnecTeen. When you purchase tickets using the Offer Code “TEEN,” not only do you get your tickets at a discounted rate of $12, but $2 from each ticket sold is donated to ConnecTeen to directly support ConnecTeen’s services and volunteers like Grace, Wentao and Ryan.

Learn more about volunteering with ConnecTeen.

With files from Claris Kabasu.