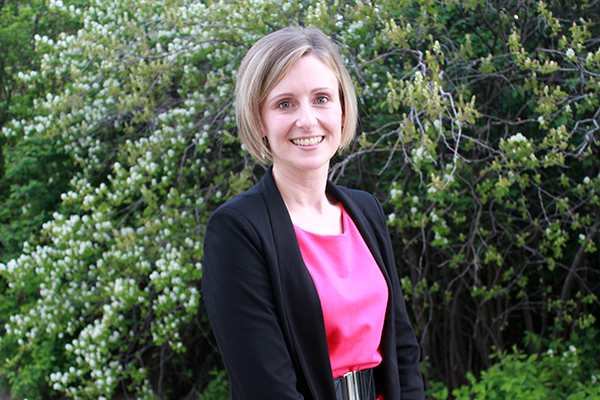 On June 1st, 2017, we introduced Jerilyn Dressler as our new Executive Director at Distress Centre.

Jerilyn grew up in a small community in Saskatchewan where there were few resources available in her community for those who needed mental health or addictions support. This inspired her to pursue an undergraduate degree in Psychology and a career in a helping profession.

Jerilyn first got involved with Distress Centre in 2001, when she began volunteering on our crisis line while taking classes at the University of Calgary.

She had a strong desire to get practical front line experience in the field she was hoping to establish her career in.

“I really enjoyed connecting with people, both the professionals who worked here and the callers who I spoke with,” Jerilyn said. “And there’s a trust afforded to practicum students and volunteers that isn’t always afforded to practicum students and volunteers at other organizations. This experience is rare. It isn’t that you had to be in an acute mental health crisis to call and you didn’t have to be a professional to answer.”

Jerilyn had hoped that volunteering at DCC would help her decide if this was a profession she wanted to pursue. What she didn’t expect was that she would meet life-long friends, have a ten year career here, and eventually lead the agency as our Executive Director.

In 2007 Jerilyn completed her Psychology degree at the University of Saskatchewan, and the first thing she did when she moved back to Calgary was check the DCC website for job openings and submit an application.

She was pleasantly surprised to see how many people she’d met as a volunteer were still at the agency and that returning to DCC, “was like coming home.”

Jerilyn speaking at our 2015 Lend An Ear Breakfast.

In 2010, Jerilyn began her Masters in Social Work, specializing in Leadership in the Human Services. She was still thinking of changing to a specialization in clinical social work, until two of her professors asked her why she was considering going into clinical work when she was excelling in leadership. It was after that point that she realized that leadership is really what she is passionate about.

“I was stuck thinking that [clinical counselling] is what I’ve always envisioned myself doing, and then my strengths and natural leanings led me in a different direction.” Jerilyn said. “That was a really important lesson for me — it’s important to have a vision for yourself, but understand that it changes over time.”

Prior to becoming Executive Director on June 1st, Jerilyn has held the roles of Contact Centre Supervisor, Senior Manager Contact Centre and Director of Operations. During this time she completed her Masters in Social Work, including a practicum with the Calgary Homeless Foundation in 2014. She also became a mother to her daughter, Jovie, in 2012, with her husband, Mike.

The support of Joan Roy

Jerilyn is grateful for the strong support system that has helped her get to where she is today. Joan Roy, DCC’s most recent Executive Director, supervised Jerilyn for most of her entire career at DCC.

As Joan heads into a well-earned retirement, she said that she feels at ease leaving Distress Centre in the capable hands of Jerilyn, the staff and volunteers at our agency.

“Having the privilege to supervise Jerilyn for the better part of her time here has been an honor,” Joan said. “Through her hard work and determination, I have watched Jerilyn grow as a social worker. There is no one else who is better suited and prepared to take over the reins as Distress Centre’s next Executive Director.”

Looking to the future

Jerilyn is excited to begin her new role as Executive Director and continue the legacy that has been set out by executive directors before her – Barb Litchinsky, Carol Oliver, and Joan Roy.

“I am carrying that legacy forward – of strong social work leadership – with emphasis on partnering in the community, trusting our volunteers and staff to do this work in the best way that they possibly can and equipping them with what they need to provide this critical service to the community,” Jerilyn said.

Moving forward, there are two priorities in particular that Jerilyn intends to focus on.

“The way people communicate is changing, so we have to expand our online services to include all of our services 24 hours a day. That’s eventually where we need to get to,” Jerilyn said.

Jerilyn also said leveraging our data is key to best serving Calgary and area: “I can see the data, the research and the work we’re doing, really carrying us forward. We have over 110,000 contacts every year so how can we best utilize that data to better understand the changing needs of our community?”

Jerilyn is an authentic, collaborative, and transformative leader who brings her passion and vision to every team and project she is a part of, and everyone at DCC is excited to see what the future holds under her leadership.