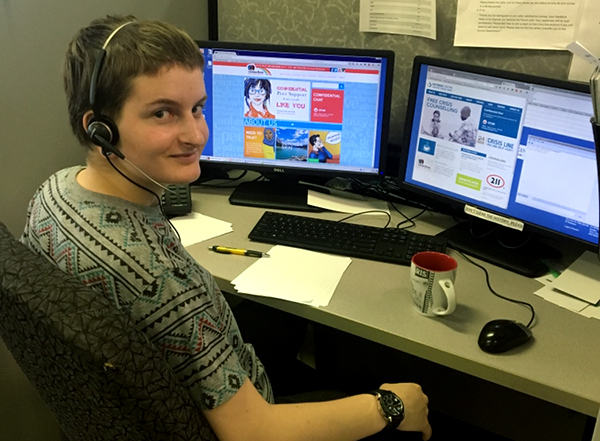 18-year-old Jasper has conquered more boundaries in one year than he ever thought was possible. Jasper arrived at Distress Centre Calgary in May 2017, as a first year social work student from Mount Royal University. As a new social work practicum student, Jasper was both eager and anxious to begin his two-month placement, and with limited time, Jasper was determined to leave an impressionable and lasting impact – and he did.

As a transgender male and advocate for sexual and gender minorities and the LGBTQ+ community, Jasper knew he needed a career where he could innovate and make a difference. “It was a debate between psychology, sociology, child and youth care counselling and social work. I decided on social work because it can be applied in many different ways,” Jasper said.

Jasper heard about DC through the university job board and decided to send DC an email with his attached resume. Within two weeks of sending in his application Jasper was offered a one-month practicum placement.

“I really enjoy the work I’m doing at DC. I wasn’t sure how I would feel about crisis work, but it is actually very rewarding – especially working the call lines.” In order to work the lines, students and volunteers must attend an extensive three-week training program, as well as commit to DC for a minimum of one-year. Jasper worked three shifts a week on the crisis and suicide line during his practicum. “DC doesn’t define what a crisis is, so the calls are never the same,” Jasper said. “I’ve received calls from people who are lonely or are in financial trouble, and I have also responded to calls from people who are transgender or are struggling with sexual identity like I did.”

Although Jasper is able to discuss his personal journey there was a time where he – like many others – struggled with his gender identity. In fact, it was only a few short months ago that Jasper openly identified himself as transgender.

“When I was 12-years-old I thought I was a lesbian. Then I thought I was bisexual or pansexual, which means you are attracted to a person’s personality rather than their gender. It wasn’t until September 2016 that I fully realized I was transgender and came to terms with that identity,” Jasper said.

Jasper’s moment of comfort came when he discovered Mount Royal University’s pride room: “I walked into the room not knowing what to expect and then I saw others who identify as transgender. At that moment I was astounded to see others like me who were happy and peacefully living life.” Says Jasper “When people call the lines I want them to feel the comfort I felt in the pride room. It’s the sense of knowing that there are others in a similar situation and knowing you’re going to be okay.”

After ‘coming out’ as transgender, Jasper changed his name as part of his transition. “I had a feminine name before and I decided on Jasper because of the freedom, beauty and peacefulness associated with the name,” Jasper said. When Jasper began searching for a practicum placement he wanted to ensure that his workplace would be inclusive and align with his vision of social work.

“As far as social agencies go DC is beyond awesome, and everyone here wants to work towards inclusivity,” Jasper said. “Of course there are always things to improve, but I am working on things too, such as using gender terms with introductions. For example, ‘Hi I’m Jasper. I use he, him and his pronouns. What is your name and pronouns?’”

Overall, Jasper hopes that normalizing asking people their pronouns will assist with inclusivity. “When you ask someone about their pronouns it begins to normalize gender diversity, as well as shows respect of various gender identities,” he said.

Upon completing his practicum, Jasper decided to stay on at DC as a crisis line volunteer.

In the future, Jasper’s goal is to work with shelters and mandate queer sensitivity training, but for now Jasper is quite content at DC: “I’d like to get a permanent position at DC one day. I find the work I do here important and exciting.”

Jasper hopes to obtain his social work diploma in 2018 and he will continue onto his bachelor’s degree in social work. Jasper has approximately three practicums left to complete between his diploma and undergraduate degree, but he is looking forward to it now more than ever before. “DC not only allows me to do the work I need to do as a student, but I can educate others and advocate for the LGBTQ+ community. I think anyone could find a home at DC.”