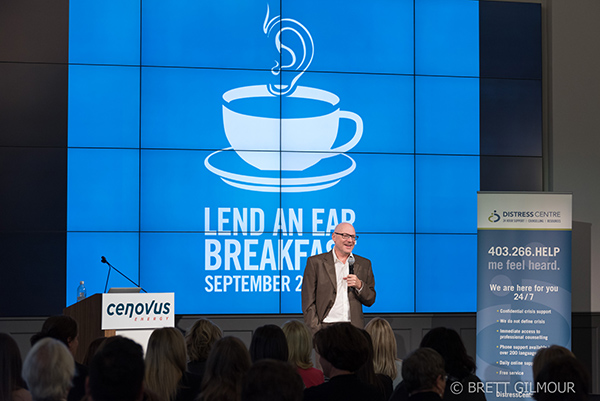 Introducing David Granirer: This year’s headliner for our Lend An Ear Breakfast

“If you give someone with a mental illness something they really want to do, they will make it happen.”

Distress Centre is thrilled to welcome David Granirer, this year’s headliner for the Lend An Ear Breakfast. David hails from Vancouver B.C. and is a stand-up comic, counsellor, mental health speaker and author. At the age of 16, David began battling his own mental health issues and after years of feeling helpless he attempted suicide. After his attempt, David was taken to a mental health facility where he was treated for six weeks. After his release, David started therapy and to learn how to manage his mental health. In 2004, David decided to take to the stage and created Stand Up For Mental Health; a program that teaches stand-up comedy to people with mental health issues.

Today David inspires, teaches and laughs his way around the world, in order to share his story and raise awareness about the stigmas that surround mental health.

Q: Have you always wanted to be a comedian?
David: I was one of those kids in school who would stick my tongue out in photos and go crossed eyed, so I think I’ve just always loved making people laugh. When my depression hit I lost that, but as I began to come out of my depression it all came back and thought it would be kind of cool to do stand-up comedy.

Q: What and who inspires you to do what you do?
David: For the past 18 years, I’ve been teaching a college stand-up comedy night course. The class actually had nothing to do with mental health, but I would see people do the course and have life-changing experiences. My students were doing stand-up comedy and being totally honest about who they were up on stage in front of 300 people. I thought, ‘Wow… wouldn’t it be great to package learning comedy and mental health and put it in a format where people want a life-changing experience while doing stand-up comedy.’

Q: How have you merged your mental health with how you teach?
David: I think with my mental health issue, which is depression, I think in some ways it underlines everything I do because it allows me to be okay. What I tell people on the first day of my course is ‘I am one of you. I’ve had depression, I’ve been in psych wards and I’ve attempted suicide.’ I think sharing my struggle gives me the credibility to be able to work with folks, so rather than them seeing me as an outsider it helps my students feel more safe and comfortable. I want everyone who does my course to know that I walk-the-walk and I will continue to walk-the-walk with them.

Q: Why should people expect when they see you at our Lend An Ear Breakfast?
David: What people should expect is a totally different perspective on what it means to have a mental health issue. They’ll get to see what people with mental illness can do, as opposed to seeing what they can’t do and seeing their weaknesses. They’ll get to see their strengths and their amazing potential that every one of them has.

Q: Why did you decide to volunteer?
David: I was coming out of a really deep depression and I realized that if I wanted to keep living I needed to do something. The crisis centre seemed like the perfect place to start because I could meet people, learn new skills and start to help out.

Q: Did working the crisis lines help you with your own struggles?
David: Absolutely. What working as a volunteer taught me was how to listen and I haven’t really been able to do that before. I didn’t know about listening at all. I think that listening helped me so much in different areas of my life. Not only to listen to myself, but I listen to the people around me and it makes a huge difference.

Q: Why is it important for people to support crisis centres?
David: Crisis centres do incredible work that doesn’t exist anywhere else. The fact that anyone can call a crisis centre (crisis line) 24 hours a day, 7 days a week and actually be able to talk to someone right away – who understands – is a huge service to the community. I think that what so many people – especially when they’re suicidal – really need is someone to talk to, and often that is enough to help them get through. There is no other service where people can do that. I mean there are social services where you can call and get assessed and they can send an ambulance or something, but I would say in a lot of cases (if not most cases) that’s not what people need. They just really need someone to listen and understand; that is a completely unique thing that crisis centres do.

Q: Is there anything else you would like share?
David: What I’ve noticed about Stand-Up for Mental Health is that I used to try and predict if someone was going to succeed in the program. I would sometimes look at someone and think ‘There is no way this person is going to do well.’ I was wrong every single time. What I’ve realized is that if you give someone with a mental illness something they really want to do, they will make it happen.

David is headlining our Lend An Ear Breakfast this Thursday, September 21st. Thanks to the generousity of Calgarians, our breakfast has sold out! If you would still like to support our event and our crisis services, please make a donation.