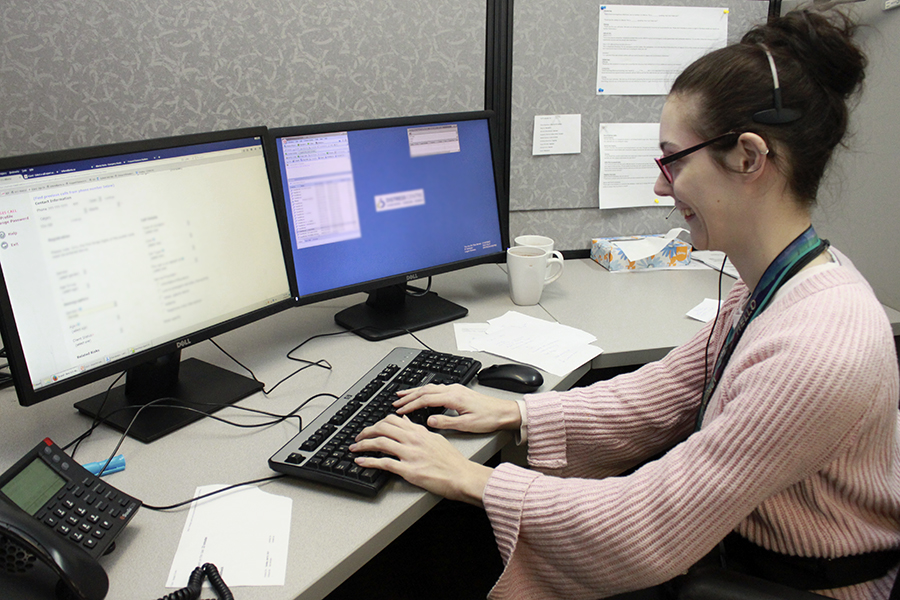 Kate Billett: A passion for helping others

When Kate Billett was 16-years-old she made a decision to pursue social work.

“I wanted a career where I could help people,” says Kate. “I developed a passion for crisis line work and mental health, so that’s what ultimately drove me into social work.” Originally, Kate thought she wanted to be a teacher, but her high school experience and interactions with her peers proved to be more challenging than the school work itself. “At first, teaching was appealing because I wanted to work with teenagers, but once I discovered social work I knew I wasn’t going to change my mind.”

Kate, now 29, is a Contact Centre Coordinator/211 Information and Referral Specialist at Distress Centre Calgary. She was born with cerebral palsy; a brain defect that affects motor skills and hand extremities. For Kate, she prefers people to look at her disorder with authenticity: “I never use the word disability. I just prefer not to use the terms disabled or handicapped because for me it sounds disabling, like I can’t do something,” says Kate. “I have my own word to describe myself and those who know me know I use it a lot!”

Kate’s decision to attend post-secondary was never second guessed, but what was a challenge was seeking out an accessible school that had a social work program.

Kate now calls Calgary home, but she was born and raised in Saskatchewan. She said that: “the decision to come to Alberta was made when I was accepted to Red Deer College.” In fall of 2007, Kate enrolled in the open studies program in order to raise her chances of being accepted into the social work diploma program. One of the reasons Kate chose to attend RDC was because the campus is accessible. In fact, RDC is one of the few accessible campuses in Alberta.

In August of 2008, Kate was accepted into the program and she graduated two years later with her social work diploma. Not long after her graduation, Kate decided to take an extra year of open studies to finish her extra-curricular courses, so she could enroll in the learning circles bachelors of social work program. The learning circles program for the bachelors of social work degree is partnered with the University of Calgary. During her time at RDC, Kate had the opportunity to assist in the re-design on the college accessible washrooms. “One of the main problems is that campuses will advertise that they are accessible, however the problem occurs when they only look accessible,” says Kate. Looking back Kate says it wasn’t her favourite part, but she was able to be an advocate, which is one of her favourite traits of social work. In addition to assisting RDC, Kate also volunteered at the Central Alberta Sexual Assault Support Centre where she discovered crisis intervention, and not long after she heard about Distress Centre Calgary.

“I wanted to get into crisis work, and at the time I was volunteering in Red Deer and was searching for a paid position,” says Kate. A few weeks later, Kate discovered a job posting for Distress Centre for a Midnight Crisis Line Worker (MCLW). She applied and was the successful applicant. She began working as an MCLW in 2014, and then moved into the position of Contact Centre Coordinator/211 Information and Referral Specialist (CCC) in 2016.

“The best part [about being a CCC] is how rewarding working the crisis lines is,” Kate says. “For me, it’s rewarding when I am in the moment with someone and they tell me something that maybe they’ve never shared before. I find that very compelling and empowering.” Kate’s position as a CCC involves supervising other volunteers on the crisis lines, which allows her to provide feedback to the volunteers and support them once the call ends.

Looking back Kate has no regrets, and although her journey has been challenging at times her message is clear: “At the end of the day we are all human. The best thing we can do as human beings is support and encourage one another.”

Kate says that DC receives calls covering a wide variety of issues: “People call about bullying, self-harm, suicide, depression and mental health in general. Some people call us to tell us they are having a good day and we appreciate those calls. We encourage people to share their day with us good or bad and it’s healthy to have someone to share those positive things with too.”

In the future, Kate hopes to pursue her master’s degree in order to do clinical counselling and eventually palliative care and oncology. “I’d like to work in a hospital specifically with end-of-life patients who need counselling care and are grieving. I’ve done volunteering at the hospice and at the hospital and I’ve just been compelled to that area.”

No matter where Kate’s future takes her, she will continue to pursue her mission of helping people wherever she goes. We’re grateful to have her at Distress Centre.