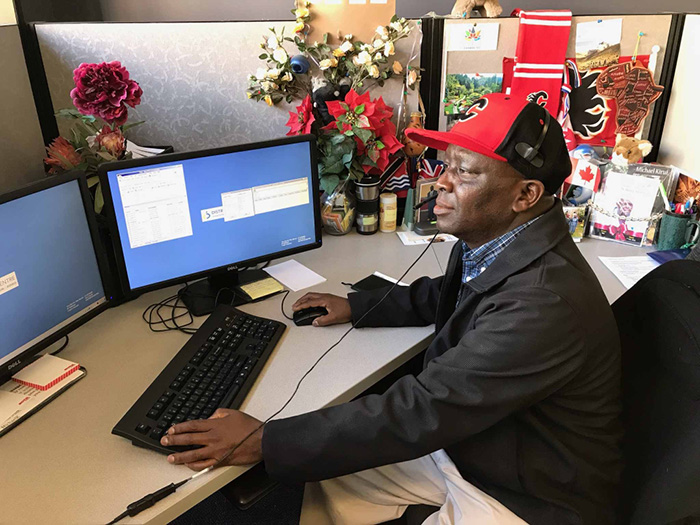 Michael Kirui: From Kenya to the Distress Centre crisis lines

In loving memory of Martha.

“My grandma was so loving and caring. She always said to me ‘Do unto others as you would have them unto you’. She never got tired of helping people, and I do what I do to honour my grandmother and the God that she believed in.” – Michael

Michael Kirui was born and raised in Kenya, East Africa. As a child of six, his parents did everything they could in order to support him and his brothers and sisters.

“It’s only by God’s grace that my parents were able to take care of me and my siblings,” said Michael. As a child, Michael enjoyed going to Sunday school and he was known as ‘the pastor’ for his eagerness to support and pray for those in need. “There was something in me and it came from my grandma. Someone would say ‘Is someone available to have a word?’ and I was the one who wanted to say something. From there, people began to call me a minister.” So Michael attended and graduated from Bible College in 1992, and continued on to volunteer in the hospital alongside his grandmother until 1997.

The mission to becoming a missionary

“I saw an advertisement,” explained Michael. “It was for Spiritual Care and Chaplaincy Training in Regina, Saskatchewan, Canada. I applied for a Visa, completed my paperwork and was accepted into the Canadian Theological Seminary.”

Michael arrived in Regina in September of 1999. “I remember thinking to myself ‘everything is so flat’, but it was also so amazing.” Michael said. “One thing that was particularly hard for me was seeing the abundance of food. I could go to a restaurant or chain and order whatever I wanted or I would go to someone’s house and everyone had so much food. When I saw that I began to reflect on where I came from and how there isn’t much back home.”

In order for Michael’s grandmother to survive she would pick vegetables out of her garden and sell them in the village. Michael remembers his grandmother bringing home bread, meat or milk, but instead of eating it herself she would ensure that others ate first.  “I never saw my grandma starving, but I never saw her having food. It is a miracle that she survived,” Michael said. Another instance of culture shock was when Michael went to cross the street. “The cars back home would run you over. Here I remember I went to go cross the road and there was a vehicle coming so I waited and all of the sudden the vehicles just stopped.  I thought ‘wow… they are letting me cross!’”

In 2000, he was a year away from completing his first degree when he heard his grandma was sick. Michael returned to Kenya and shortly after returning to Regina he received news that his grandmother had passed away. She was 102-years-old. Although the passing of his grandmother was extremely difficult Michael, he was determined to continue with his education.

Michael earned his first degree in 2001 with a Masters of Arts in Religion after completing his Chaplaincy practicum with Pasqua Hospital and Regina health district.  He contemplated going back to Kenya, however, an opportunity arose for him to do a residence practicum at the Foothills Hospital in Calgary, Alberta.

In addition to the Foothills Hospital, Michael also worked in the Rockyview General Hospital and the Peter Lougheed Centre as part of a residency program. In 2004, Michael received his diploma in leadership and ministry.

After completing his Chaplaincy diploma, Michael was offered a work and volunteer position with Agape Hospice in palliative care. He was with Agape for five years. In his spare time Michael would assist immigrants who were coming to Calgary specifically from Africa, as well as help in the church as a minister. While he was volunteering he would share stories about his time working in the hospital in Kenya.

In 2004 Michael returned to Kenya and went to back to the hospital where he and his grandmother used to work.  “I asked if I could work at the hospital, but there was no way that they could support me,” Michael said. “I didn’t have a sponsor or anyone who could help support me working there.”

After spending six months in Kenya, Michael decided he needed to return to Canada before his work visa expired. Upon his return, an old friend reached out to Michael and suggested he look into Distress Centre Calgary. “My friend told me that I would be a good fit at Distress Centre, so I said to myself, ‘why not?’ and I sent in my resume.”

Michael joined the Distress Centre team in February 2011. Before starting his new position as a Contact Centre Coordinator and 211 Information and Referral Specialist, he attended Distress Centre’s extensive three week volunteer training program. Once he learned how to work the call lines Michael went straight to work. He has been working the call lines ever since.  One of Michael’s favourite things about working at Distress Centre is the amount of diversity and acceptance in the organization. “One of my main goals was to work with all kinds of people and of all faiths, and that is what I am able to do here. Everyone who calls Distress Centre deserves to know that they are loved and that there is always hope – no matter what form that may be in for them.” Michael (middle) with his children, Emmanuel (left) and Ellen.

Although most of his call experiences are good there have been calls which prove to be more difficult. “Sometimes when I am on the lines people will hear my accent and they will ask where I am from. I never hide the fact I am from Africa. I’ve been asked the question ‘are you a terrorist or something?’ and it makes my heart collapse. I don’t take it as an offense, but instead I educate and I tell people that I am here to support.” Michael said.

“I’ve had people tell me to go back to where I came from and that I am taking jobs away from them, but I still accept those people with no hesitation. Instead of being hurt I feel a greater need to help and I empathize that they are going through a rough time. Then I say to them what my grandma said to those who were hurting. I say, ‘I am here for you.’”

As Michael looks back throughout the years he can’t help but notice how his views have changed. “If I wasn’t with Distress Centre I would be doing something very similar. Preaching for me is a lot different than what it used to be. Preaching for me is listening and being on the lines with somebody who is going through a hard time and I can honestly reassure them that they aren’t alone. I tell them ‘I am here with you’ and that is me preaching.”

Every once in a while Michael finds time to escape to the beautiful mountains of Jasper, Alberta or to the small town of Canmore, Alberta. When asked why he likes those places in particular Michael’s answer was simple: “The soil reminds me of home.”

After 12 years of living away from his family, Michael was reunited with them in 2010. Today, Michael’s children are pursuing post-secondary and Michael continues to work in the contact centre at Distress Centre. “I can see my grandmother’s work coming back and it makes me appreciate what I am doing,” Michael said. “When I see my grandma again I will hug her and say, ‘thank you for the influence you had in me. I know that the things you have done have reached so many people, and although my work has gone in a slightly different direction, I’m so grateful for the influence you’ve had in my life.’”