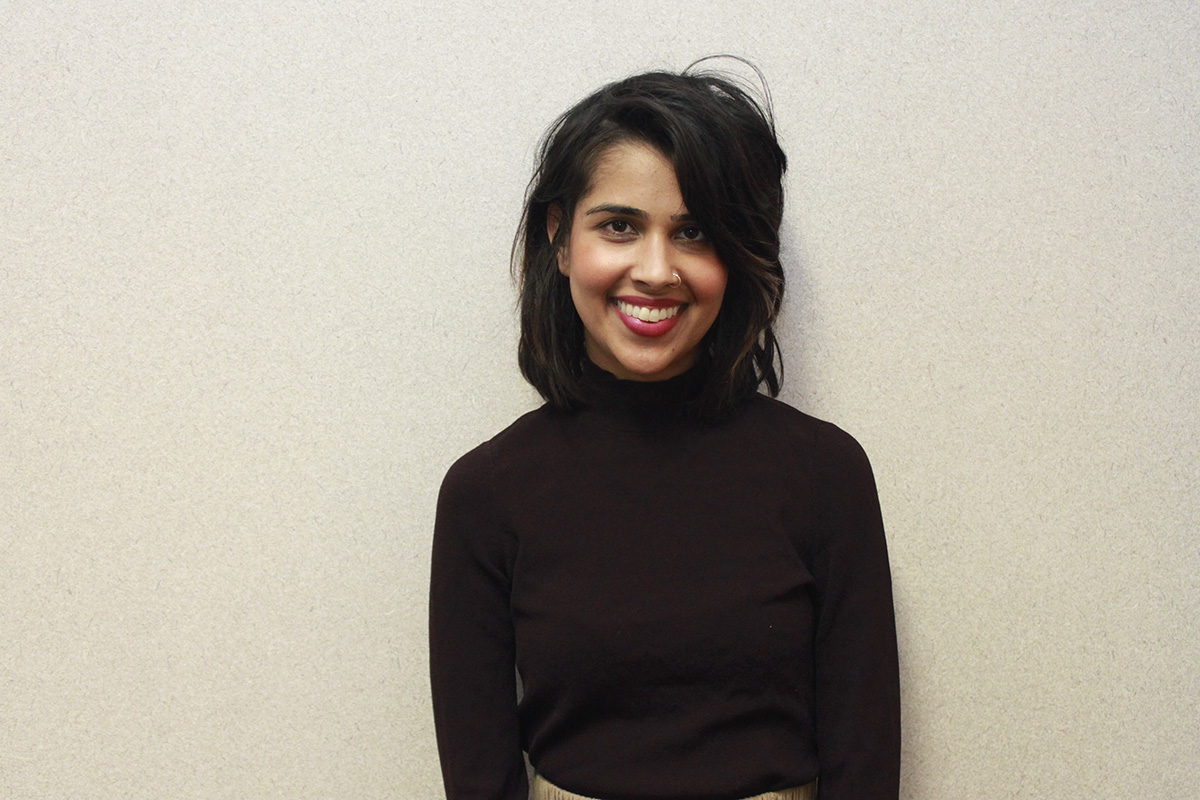 Natasha Dharshi began volunteering on the Distress Centre crisis lines in 2014. The experience she gained at Distress Centre and the skills she learned propelled her through every job she would work after Distress Centre, from forensics to homelessness to addictions, and ultimately lead her back to our agency five years later.

Natasha moved out of Calgary after volunteering at Distress Centre for a year to work in the mental health field in Ottawa, Ontario in a variety of roles.

“[Distress Centre] was the only place that taught me how I could work with people just by their vocal intonation and not anything else,” Natasha said, adding that she used those skills again and again in the jobs she worked after leaving DC. “This was the one job that continuously helped me to feel comfortable to deescalate, regardless of whether they were in my office, or I just had them on the phone. If it was a serious situation where they could be on the top of a building or in a fire escape or in a stairwell, Distress Centre gave me the skills to [deescalate].”

When she heard that Distress Centre was starting a new department, the Community Resource Database (CRD) team, which was taking over for the City of Calgary Information Centre, she felt the draw to return to DC five years after she had left.

“I really like working on projects that work from the ground up, developing policies and procedures and finding how things work,” Natasha said. “It intrigued me.”

She was hired as a Community Resource Specialist – Database Curator on the then new CRD team in January 2019.

The CRD team maintains the comprehensive online database of community resources that Community Resource Specialists navigate to find services for 211 callers and chatters. Albertans can also search the database for services themselves via InformAlberta or the 211 Alberta website.

Natasha said she likes the challenge of organizing the information in a way that makes sense for the general population.

“If I had to describe Distress Centre, I feel like it’s a visionary for connection,” Natasha said. “It’s a place where people are able to connect with other human beings and feel connected to their communities. It allows people to have those conversations on the phone. It allows people to access resources over the phone or to come in and speak to a mental health professional in person.”

When Natasha looks back at her time on the crisis lines, she is inspired by the power of simply being connected to another person. At Distress Centre, we aren’t here to solve someone’s problems or tell them what to do. We are here to listen and offer support so that the person has the space to find their own path, independently and autonomously.

“Allowing people to feel empowered for making that call and creating a plan that they can follow through, I think it’s really rewarding,” Natasha said. “We’re giving people their courage and independence back, their beacon of hope, their light. You’re giving that back to them by doing nothing but just by being on the other end of the line, which is amazing.”

She continued: “I don’t have a magic wand that I’m swirling over them, there’s no fairy dust that I’m sprinkling on anybody. It’s solely picking up the phone and holding space for someone, which any one of us can do at any point in our lives. We don’t always realize the importance of it and I think Distress Centre brings that importance back.”

Natasha experienced the power of connection on one of her first calls as a crisis line volunteer. She had been volunteering for just a few weeks when she picked up a call from a person who was in the process of taking their life. They were unwilling to disclose their address so that Distress Centre could send help.

The person said that they wanted to talk to someone before they died, and that’s exactly what Natasha did. She talked with the person about any topic they wanted. They realized they had a shared interest and began discussing it, the caller fading in and out of consciousness as they spoke. While still chatting about their mutual interest, the caller shared some details about the area surrounding their house, and from that, Natasha was able to figure out where the person was and emergency services were alerted. The call ended when an emergency responder picked up the phone to let her know they had arrived.

“I don’t know what happened at the end of the call,” Natasha said. “The phone disconnected and then I said – okay, I did what I could. Tough call but a call I remember five years later, because of that moment of connection that we had over a shared interest, that connection that led me to being able to send help.”

Natasha has her Bachelor of Science, with a specialization in Psychology, her Masters of Cognitive Science and is working towards the completion of her Masters of Clinical Social Work.

We’re happy to have her back at Distress Centre.

“I don’t know how long my time or trajectory is here, but I’m happy I came back. I’ve worked in a lot of different places but Distress Centre has always stuck out to me.”

Join our team! Take a look at our career and volunteer opportunities.