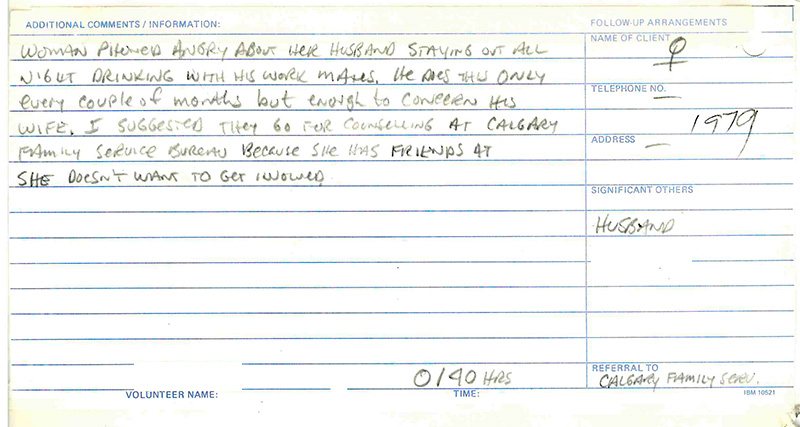 Image: A contact card from 1979. Some information removed to protect confidentiality.

Compared to the first five years of DIC operations, 1976-1979 were relatively uneventful.  Reliable, ongoing funding was the major administrative issue. Co-ordinator Penny Cairns noted in a 1976 staff meeting that fundraising was taking up so much time it was hard for her to attend to staff support, volunteer involvement, program assessment and research. 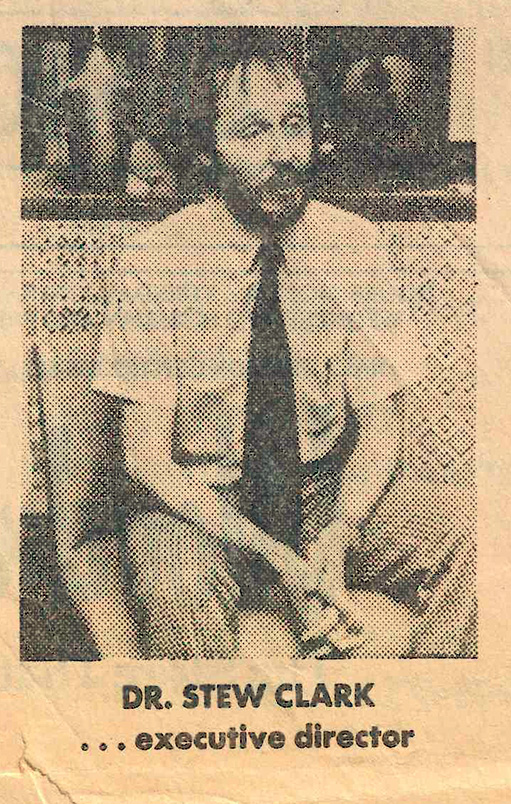 A significant issue for counsellors and volunteers was the 10 percent of callers who were regular users of the service. Russell Pritchard, a volunteer, noted: “We have people who call once or twice a day, who want to talk about the same problems over and over again, but aren’t willing to take any advice or listen. They aren’t prepared to make changes in their life.” Stew added: “They need ongoing counselling and support. That’s really not our mandate. We’re crisis intervention.” The team created a “People Book” with instructions for staff and volunteers, so the regulars could be dealt with consistently. A similar practice remains necessary today.

Richard Ramsay, U of C Social Work faculty member, commented on a research study where regulars were consulted. His summary:

“What came back was that crisis centre listeners are essential for us (callers), because the rest of the community is fed up to here and has mostly given up on us. You are our lifeline. The other finding was about how the callers got to know the listeners, and could tell if they were having a bad week. Even though connection with a listener is random, when they knew the listener had helped them before, they could sense when the listener was stressed. They talked about being helpers themselves, and it made them feel good.  So, the idea that the chronic caller was some kind of scourge on a crisis line turned out not to be true.” 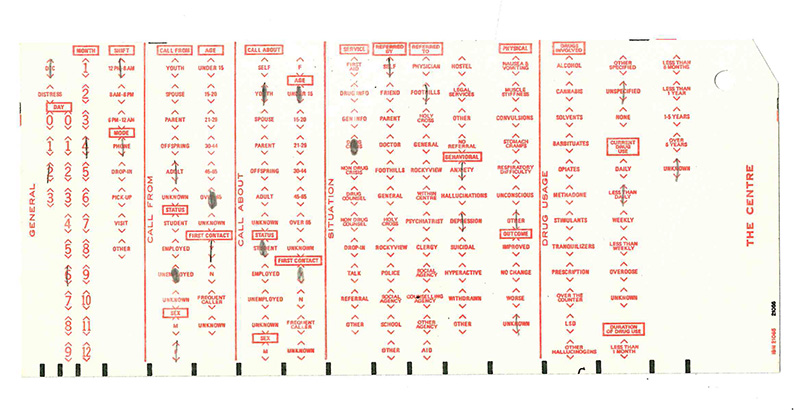 In March of 1976, Penny resigned and Dr. Stew Clark, who had been involved since inception, was appointed Co-ordinator. This title changed to Executive Director in 1979. Perhaps the most important event of 1976 was when The Centre became a member agency of the United Way, a relationship that exists to this day and continues to provide critical stable funding.

In 1977, the slogan became ‘A Place to Call to Make Things Right.’  The founding Calgary Drug Advisory Society became The Distress Information Society, registered under the Societies Act. The unofficial name was The Distress Centre, still operating beside the Drug Centre with joint staff, volunteers and the Board. The Distress Centre was listed 3 ways in the phone book, so the public could find the number to call. The basic values remained unchanged: “We believe that all people have a right to receive competent, sympathetic assistance during a crisis, any time, day or night.”

''We believe that all people have a right to receive competent, sympathetic assistance during a crisis, any time, day or night.'' 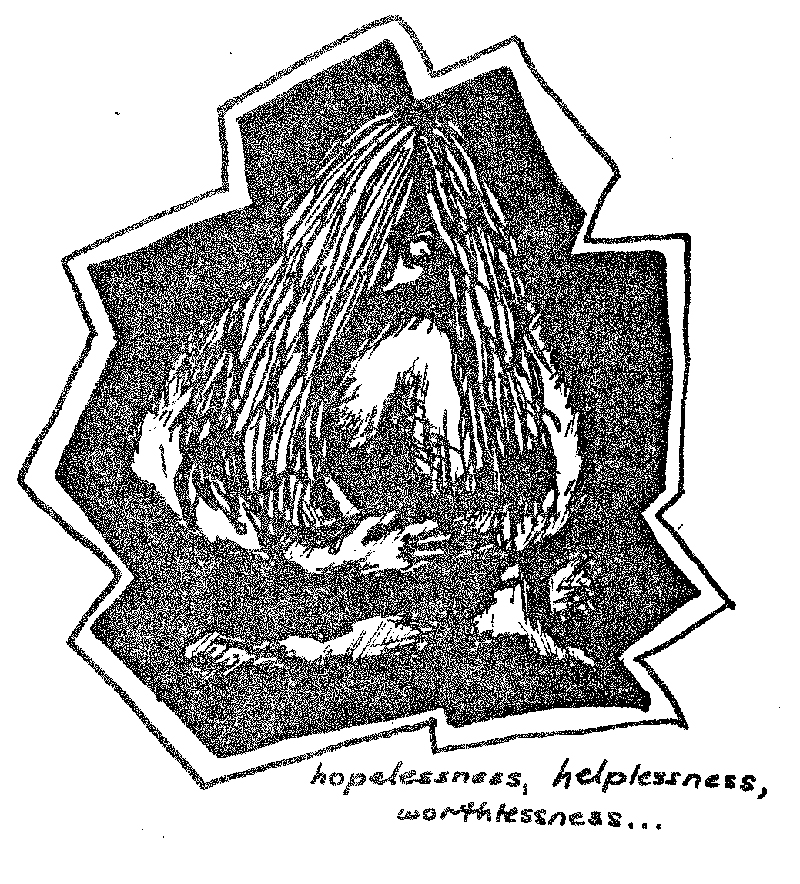 The majority of caller concerns were family or marital problems and general despondency, with alcohol use a growing issue. 14 000 crisis calls were received in 1979. The Deaf Association provided a TTY machine to enable assistance for their members. There were 60+ suicide calls per month, and the Distress Centre was being identified as a suicide call centre despite efforts to avoid being known as just a suicide hotline.

The average caller was female, age 25-45. Short term counselling, referral, and home visits when necessary were all available during the day, Monday through Saturday. Counsellors also assisted in training, support, and feedback to volunteers. Stew Clark remarked at a staff meeting: “If anything is preventative, God knows our service has to be. We’re talking to people before they have to call the police in, before they have to go to the emergency wards.”

By 1979, the space in the old YW had expanded to the entire basement level, with a telephone room and rooms with floors built into the concrete base of the swimming pool. The initial hand-painted psychedelic walls had gradually been replaced with more traditional decor. Nevertheless, the building had been condemned. Heat was via the swimming pool, and a Tenants’ Committee led by Hilde Houlding from the Distress Centre Board met regularly while City Council debated what to do with the facility.

At the end of 1979, every other street drug agency that had started in the early 70s in Canada had folded. The Distress Centre/Drug Centre remained, having successfully evolved into a broader distress line.  Programmes Assistant Linda McFarlane noted that “What had not changed and what I believe has helped the centre survive when other similar centres have folded has been the volunteer concept.” Stew moved on to another job, and at the end of the year, Jeanette McEachern was hired and began her 18 years of leadership, supported by six full-time and 1 part time staff, and 70 volunteers. She was described by many as ‘a force of nature’, so look for her contributions in Story 10.