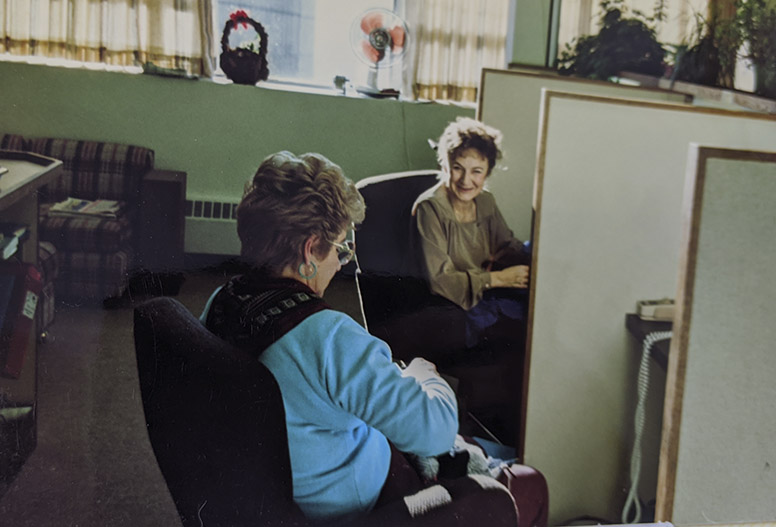 1980 marked the 10th anniversary of the Distress Centre/Drug Centre.  At the Annual General Meeting, Chair Hilde Houlding was pleased to note that: 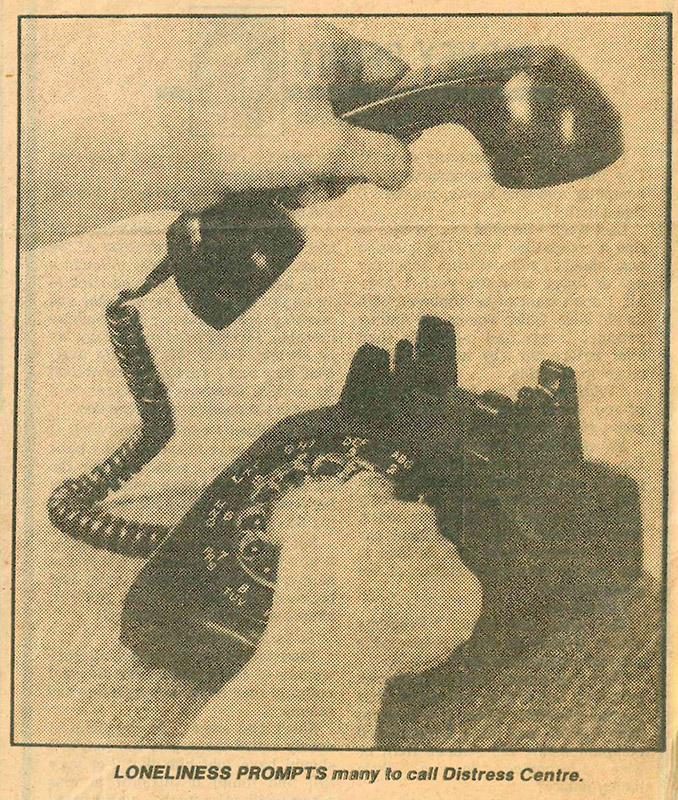 “The month to month struggle is past, the new challenge is to maintain the vital, productive partnership of volunteers and professional staff that we have created.  The pressure in this new era will be the increased demand on all our social services precipitated by the rapid growth of our city. Despite major disruptions in admin and the physical environment staff have continued to work at a high level.”

Jeanette McEachern, Executive Director, commented on the increased professionalism of the agency, as well as the increased visibility in the social services community that came from joining the Council of Family Serving Agencies, Social Welfare Faculty Council at U of C and the Alberta Association of Social Workers as well as becoming the Canadian Crisis Centres Prairie Representative, and attending AADAC meetings. Reporting to three funding agencies involved much more justification, more complex proposals, and monitoring that included evaluation.

''The month to month struggle is past, the new challenge is to maintain the vital, productive partnership of volunteers and professional staff that we have created.'' - Hilde Houlding

As the decade opened, she declared it a good time for change, to brainstorm new policies and decide future directions.  Of concern, she noted an increase in suicide calls. For staff and volunteers, the possibility of violence on site was also an issue, requiring a balance between maintaining comfortable access for clients and safety. Suzanne Rosebrugh, a counsellor at the time, remembers:

“One of the staff was held hostage in the office, and a male staff went in, and then he was held hostage.  Then there was the time a person tried to break into the building one night, when we were still on 11 Ave, who ended up falling through the roof, got caught on the struts and hung there for a while because he couldn’t get out. It was late shift, the noise was heard, and police were called.”

1982 said goodbye to the purple smoke-blowing letterhead, replaced by something more conservative, and hello to a new policy manual. Five objectives were identified in an external survey and evaluation done by Can West in 1983: immediate empathetic assistance to clients in crisis, accurate information about drugs and alcohol, provision of short-term counselling, acting as a referral gate, and providing effective public education. All were intended to be preventative in nature, with early intervention through counselling or education in order to prevent further deterioration in the client’s ability to cope with his/her problems.

The Can West report also commented that:

“The people involved in this agency are its principal strength. Volunteers are activated only after careful screening and vigorous training. Cognizant of their limitations, volunteers can refer and immediately schedule clients for counselling whose problems are too complex to be handled by telephone…This feature, coupled with the role of professional staff in training and supervision, considerably enhances the quality of the service which is provided by this agency in the field of crisis intervention and referral.”

''The people involved in this agency are its principal strength.'' - Can West report

Banff tapped into Distress Centre lines in 1985, paying $4,300 for the service as they could not fund or staff 24/7 themselves. By 1986, Jeanette reported 75 volunteers, and 11 full time staff, including a new clinical supervisor position. PCP and crack, used together, was a new craze of much concern. And, for the first time on record, the phones were shut down for 10 hours due to a storm…in July.

From a 1982 newspaper article.

On a positive note, Katie Black (Teen Volunteer Co-ordinator) and Jeanette were featured in an article on the agency in the March edition of Canadian Living. Alberta Theatre Projects presented Penumbra, a play based on Distress Centre phone line, making the Centre’s story known to a different audience.

By 1988, the organization was legally Distress Centre/Drug Centre. The Board Chair declared “This is the best agency in Calgary. It is a dynamic and growing agency with a collaborative relationship with its funders.” When the 1988 Olympics were announced, OCO security asked the volunteers and staff to be alert during calls or counselling for anyone who might be a threat to the event, a new one-time request that was quite exciting.

As the 20th anniversary approached, 28 000 calls were responded to annually, 10% being suicide related. Alcohol was the leading drug concern, followed by marijuana, prescription drugs, and cocaine. Because 63% of calls came in between 6 pm and 8 am when most other agencies were closed, 58 other agencies used the DC/DC crisis line as backup.

From a 1987 newspaper article.

Jeanette noted that despite moving from the old Y in 1986 (another future story) they were bursting at the seams. For the first time, immediate counselling was not available and time for public education was limited. Proposals for additional staff were sent to 5 funders to help alleviate the pressures. A related concern is recalled by Dr. Jackie Sieppert, who supervised practicum students at the time, and later became a Board Chair:

“Salaries being low was true before my time, and it is probably still true. The concern was that the DC was such a good place to work and gave people such a solid experience and foundation, that it made DC employees very attractive for the big systems, Health being a prime example. People would come, they would be there for a year or two or three and then be snapped up, because the salaries were far higher in the public sector.”

Suzanne Rosebrugh, by then clinical supervisor, reflects back on the organization at the end of the decade:

“Everything was geared to the caller or someone coming for counselling services.  That was key and we never wavered from that. The clinical situations that I dealt with, the variety, the complexity, some of them were quite challenging and difficult. The people who volunteered on the lines, on the board, just reminded you always the balance of yes, life is really hard, there are awful things that happen to people, but also there is this powerful force for goodness. I always carried that with me.”

As you will see in the stories that follow, the 80s were a time to move forward; into a new building, into new programs, and into serving an ever-growing number of Calgarians in crisis.