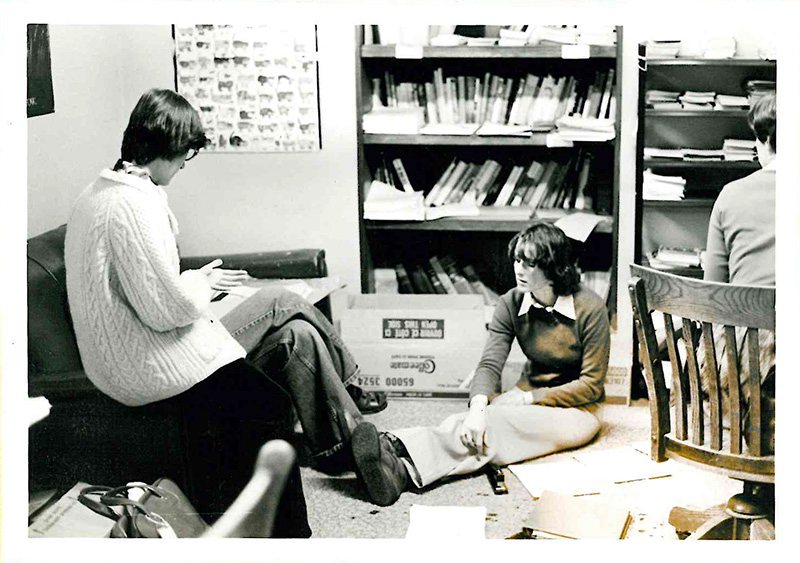 Throughout the 70s, funding was an ongoing challenge. Ken Low noted that generally: “Funding is a problem for any pioneering endeavour, funders use a criteria and metrics for leading edge initiatives, to get supports.” The Drug Information Centre (DIC) was seen to be short on such formal metrics, on policy, and on the strict procedures many funders required.

In addition, the provincial government and its agencies were under upheaval. A 1975 report noted that the new 1971 Conservative government brought changes in The Alberta Drug and Alcohol Abuse Commission (AADAC) philosophy, mandate, commission and CEO: “As these changes took place, it appears AADAC in particular and government personnel, both local and provincial, began to change their views as to where funding should come from and as to what government agency the Center should relate to.”

Initial Drug Advisory Board Chair Jan Skirrow, who later became AADAC’s CEO and then Deputy Minister of Community and Occupational Health, also remarked on this change: “When the Drug Centre broadened its mandate, it became less an AADAC issue and much more a public health issue.”

“Originally there was some seed money from AADAC. AADAC felt totally unequipped to deal with young people and psychedelics. Most of their staff were ex-alcoholics who had successfully gone through the program. AADAC had nothing in common with 18-year-olds doing acid. They didn’t get it. And the young people didn’t get 60-year-old recovering alcoholics. I think AADAC recognized those two things, and they essentially said we will give you Don Bruce and his salary for 3 years and see if he can establish something that has more of an appeal to the young people who need that kind of help.”

''Originally there was some seed money from AADAC. AADAC felt totally unequipped to deal with young people and psychedelics. Most of their staff were ex-alcoholics who had successfully gone through the program. AADAC had nothing in common with 18-year-olds doing acid. They didn’t get it.'' - Emil Roessingh

By August 1970, there was only enough money to last through to October 1st, after which the DIC operated on a bank loan obtained by the Advisory Committee.  Preventive Social Services (PSS), forerunner to Family and Community Support Services (FCSS), began to be responsible for some of the funding, via the City of Calgary, until March 31, 1971. AADAC provided enough money to finish the year. Funding from AADAC, Calgary Federation of Counselling, PSS and the Royal Bank provided a total of $50,015 for the second year of operation and $74,850 for the third.

Dr. Stew Clark talks about financial needs in a 1977 newspaper article in the Albertan.

Sometimes, a Board member could help. The Junior League Board representative had coffee parties to raise funds and awareness. Ron Ghitter, an original Advisory Committee member recalls:

“I got elected as MLA and then I could be a little more useful. When it came time that they needed some funding, I worked with Neil Crawford who was the minister, and we got them some money to get things going. I remember the petition I presented to the government; it got a lot of signatures. The Lougheed government was very receptive to what was going on, and concerned.”

Three different reports regarding the DIC were commissioned in the mid-1970s. Two were conducted by AADAC-affiliated evaluators and thus felt by some to be biased. A third 1975 report was commissioned by the provincial government, conducted by two outside researchers. It concluded:

“On the one hand, the Center has had to develop programs for which it could hope to get funds rather than concentrate on those programs which it knew from experience were most needed. Also, the indefinite nature of funding seriously limited the ability to plan and program ahead.”

No funds were released by AADAC for 1974-75.  The 1975 report notes “The Center interpreted these discussions to indicate that AADAC wanted either to take over the Center’s operations or force the Center into the field of treatment and rehabilitative services.”  It also stated that Preventive Social Services, via the City of Calgary, would be the most appropriate funder at 80%, with AADAC contributing 20%.

With respect to the two earlier reports, the new one stated:

“The government agency responsible…rather than finding ways of helping the Center to find new funding sources, put its efforts into developing information to support its contention that the Center wasn’t needed as a priority, and hence shouldn’t qualify for any government funding.”

For 1975-76, funding was $60,000 for crisis and counselling. Funding issues were featured in the Calgary Herald a number of times in 1976, regarding the 76-77 funding year. On February 3, they reported that the Drug Information Centre had lost a third of its PSS subsidy, and as a result, the DIC had indicated:

“…if they got less than asked for the Centre would close, so they will undoubtedly appeal. Alderman Barb Scott said she voted in favour of the large cut because she is concerned about the centre’s attempt to set itself up as the only comprehensive 24-hour crisis unit. She also said it duplicated some services of other agencies such as AID and the Rape Crisis unit.”

An emergency Board meeting discussed making telephone calls directly to Aldermen, attending city council meetings, and sending 30 letters to oil companies asking for funds, which yielded $500.  The United Way would not fund drug related programs, believing that funding should come from AADAC, and objected to the use of the word Drug in the Society’s name. A general Drug Information Centre meeting resulted in the name change to Distress Information Society, and in 1977, United Way funding began at $1600 a month. As Emil put it:

“After three years AADAC decided to pull the plug and said ‘you go find your money somewhere else.’  They were really pushing for us to get our funding through United Way, and the only way we were going to get that funding was if we became a crisis centre. They held that over our heads and we didn’t like it, but that is what ended up happening.”