Image: This image of volunteers appeared in our 20 year anniversary publication in 1990.

At the 1980 AGM, Jeanette McEachern was proud to say the Centre had a solid volunteer training program, a good funding base and an active and responsible volunteer group. She also remarked that “other centres wrestle with the same problems we do: regular callers, the intoxicated caller, the sexual caller.” Advice to volunteers in a newsletter included: “If you are going to send an ambulance out and you know the client has illegal drugs, it might be a good idea to advise the client to get rid of, or hide the drugs.”

“On midnights, we’d have the odd scare but the police were always very good to us, showed up right away. The odd beer bottle thrown through the window. And then we would have the people who were parading up and down because there was a planned parenthood agency upstairs, so we would have to go out to escort people in. There was also the night when someone threatened to burn themselves on our doorstep, set themselves on fire.”

''On midnights, we'd have the odd scare but the police were always very good to us, showed up right away. The odd beer bottle thrown through the window.'' - Glenda Nyberg

Getting accurate data on call cards (reports on conversations with callers) from busy volunteers continued to be an issue. A newsletter mentioned “Our computer call cards have to get checked before they go into the computer. If they are not correctly filled, they get rejected, poor things.” This resulted in a “card-filler-outer-of- the-month” – CFOOM – award. One winner was announced by the coordinator: 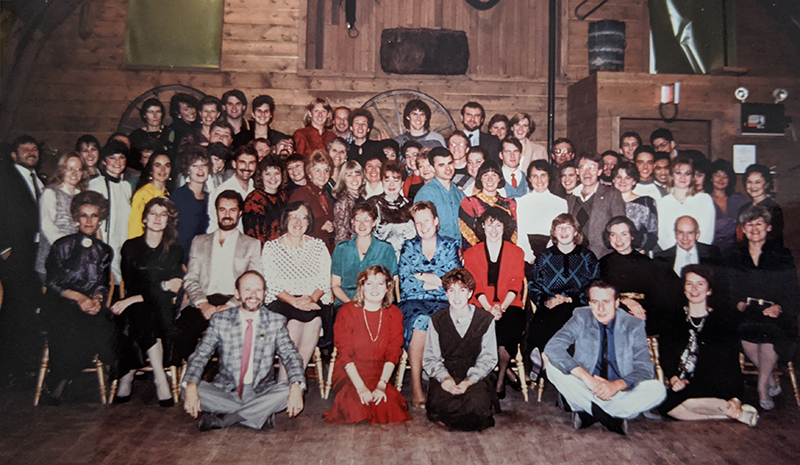 “His cards were neat, but more importantly, the description of the call was excellent and he was not afraid to state his opinions of how the call turned out and what he thought of the client. This is not the same as venting your frustrations on the card.”

The September newsletter described the staff person’s function with volunteers as debriefing shifts and call cards, listening in on calls to give feedback, and “taking you out for your one-year lunch and generally helping you with problems that might arise.” The Coordinator had a group of volunteers, was responsible for training and Big Persons (experienced volunteer who trained others) supervision, recruiting, screening and allocating shifts. Resource people were on shift 24 hours at a time if a volunteer needed to talk things through, and came down every few months to do observation shifts and meet volunteers. 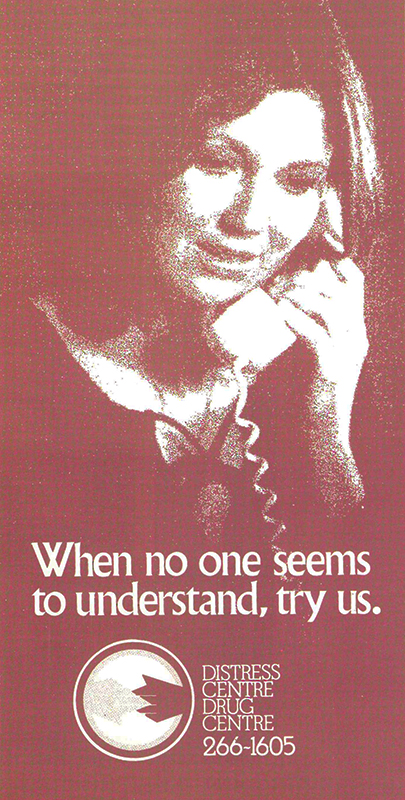 This ad appeared in our 20 year anniversary publication in 1990.

In the early 80s, 50 hours of volunteer training was required. A Big Person had to be a regular for at least 9 months, with good telephone skills, and be comfortable giving both positive and negative feedback. Regular callers, or difficult callers who were not regulars were noted in the People Book as well as those dangerous or barred. Glenda remembers:

“We had regulars, a brother and sister – she would call and then when you answered she’d say, ‘F off.’ And we had to answer the call because you never knew who was calling. I called the police and told them that she was interrupting our service. Pretty soon a police woman called me back and she was laughing and she said, ‘I called her and she answered the phone and she told me to F off!'”

Listening was still important. Marlene Duxbury, coordinator, told the Herald in April 1983: “We listen non-judgementally. We care. We try to understand. The volunteers can’t resolve someone else’s problems but listening can help them sort their problems out.”

''The best way to help people is just to lend them an ear. A suicide attempt is always a call for help. Someone contemplating suicide is like at the bottom of a well. He can see the light at the top but he can’t get up by himself. You’ve got to get down in the well with him and share the well with him in order to get him up and out of it.''

A time of change

The mid-80’s was a time of change for volunteers. Glenda remembers:

“It was still moving from a street agency into being more formal. I look back on it now, I think it was sort of turf protection. Some of the volunteers, they were with the agency when it was run by volunteers, it was strictly that, and then it was in the process of becoming more organized and formal and growing and you know how people are, they don’t like change.”

In 1985, an Open Letter was sent to the Board and Jeanette from a Committee of Senior Volunteers to discuss areas of concern: intake procedures, reluctance to involve volunteers in the problem of counsellor load, and not being used enough for publicity, education or training. They felt they were: “on the outside looking in at a problem they have no control over, directly affecting on the line service to clients.”

Presumably this was resolved over time, as a 1988 Agency Review noted: “The high level of satisfaction/comfort indicates that the volunteers get enough agency support to accomplish their role very effectively. All respondents felt positive about their work with Centre and as well, all felt appreciated by the Center and by the callers.”

Teen Line Volunteers who wanted to move to the adult crisis line had to re-train. Jennifer Raymond remembers: 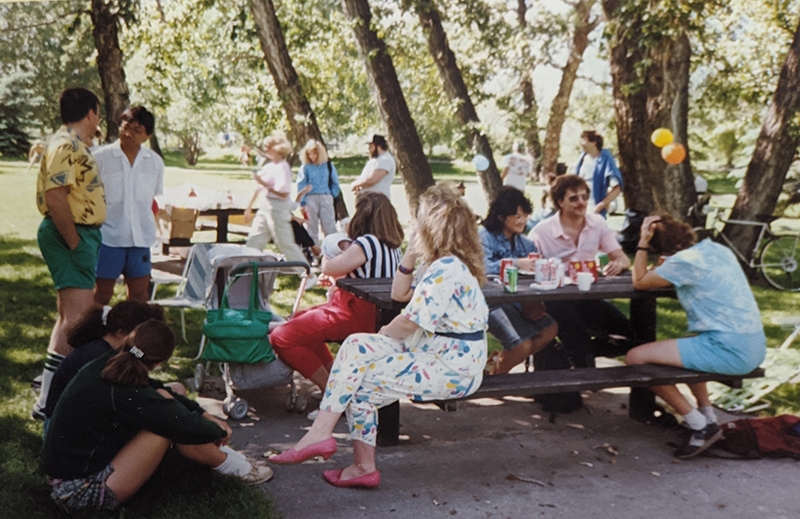 “I could have stayed a couple more years on the teen line, but I wanted to switch because I was eager to get more calls. It would be pretty rare for Teen Line to be like the main line, where you would have 3 people on hold. I enjoyed having to multi-task.

“I had to attend three evening trainings to switch over, I think one was community resources. I hated doing role plays. I would die, every single time. I think I had to do a few nights of adult role plays, and then be supervised, which I also hated. But I had very, very nice supervisors.”

Crisis calls were just as serious as in the previous decades, and continued to have a long-term effect on volunteers, both positive and negative. Glenda offered stories from her 19 years of service:

''I think one of the most wonderful calls I had was when we were still at the Beltline and this woman's husband had died suddenly. She was waiting for his family to come so we spent all night with her, to keep her company. I'll never forget her because she was so thankful for our service. And the last call was one of her kids was at the front door and so she hung up. It really touched my heart.'' - Glenda Nyberg

“My worst, even after all these years I still don’t feel like I can talk to other people about it. We had a man in a hotel that was threatening suicide. He had a gun. Or claimed he had a gun anyway. We called the police and heard them come through the door. And I could hear the screaming and yelling. He was swearing every word in the book. We have a few volunteers that once they had a crisis call, they didn’t want to come back. They didn’t want to do it again or risk doing it again.”

“For a lot of people there was a lot of camaraderie, they got together and did things. I remember there were the ones that were working, and a bunch hanging around that were not working, because they were there before or after shift or dropped by to see someone. They always made sure there was space for them to hang out, which was important. It gave them companionship and it was part of their life.”

By 1989, there were 89 crisis volunteers with 14 resource volunteers backing them up. The average commitment was 17.4 months and volunteers answered an average total of 80 calls a day; 33,000 hours of time. Staff had not had to cover the main lines for volunteers for a year, all training classes were full, and there was an excess of teen volunteers. The DC/DC, still dependent on its volunteers for service, was well prepared for the next decade.