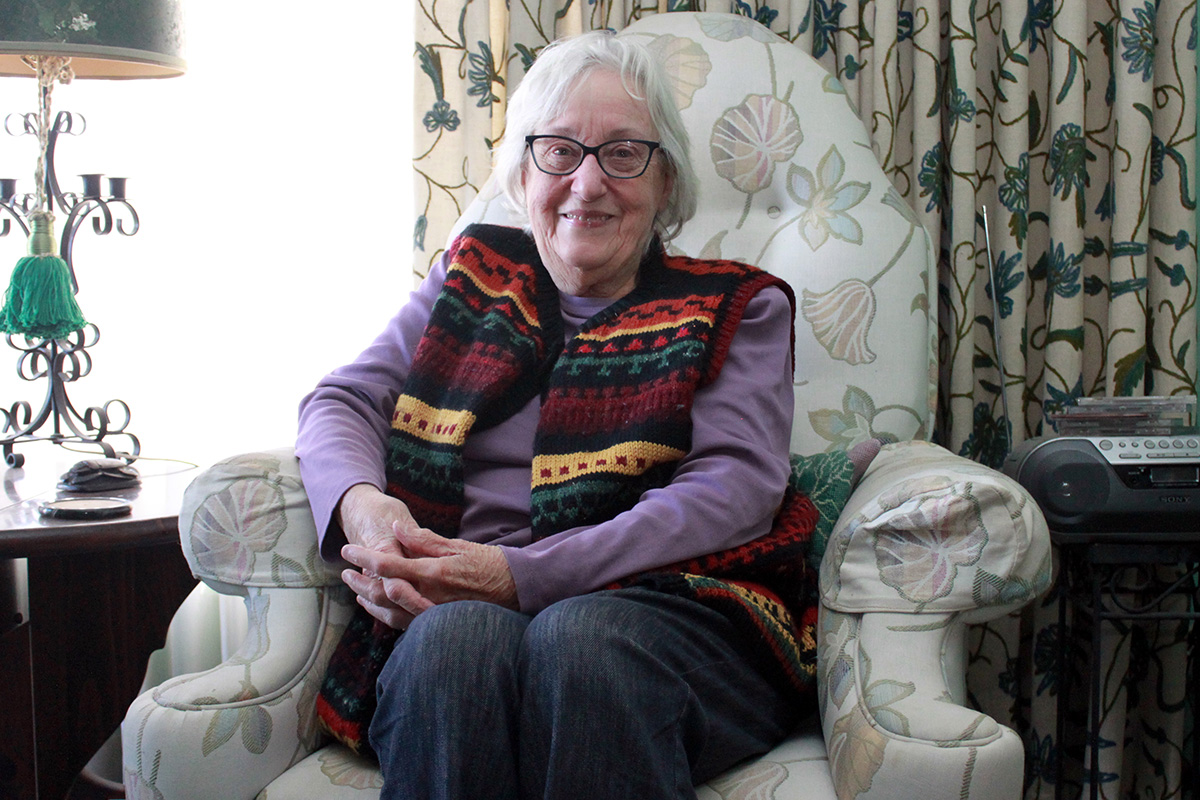 From the beginning, volunteers have been the backbone of Distress Centre’s service to the community. One of many individuals who have commented on their importance is Dr. Jackie Sieppert, Dean of Social Work at the University of Calgary and former Board Chair:

“The organization would collapse without volunteers. You cannot run a 24/7, 365- day crisis response agency with a small number of staff. The funding does not allow you to have paid people on the phones all the time, even if that was desirable.”

It would be impossible to pay individual tribute to the thousands of volunteers who have served, but their voices are heard within many of the stories. 50 Stories will offer a few individual portraits in attempt to reflect various aspects of the role over time. What follows is the experience of Glenda Nyberg, who served from 1983 to 2002, condensed and edited from an interview with her. Some of her recollections were also reported earlier, in Story 14 on the 80s. Glenda recalls:

“I had a friend who suddenly lost her husband, so I told her she could call me day or night, which she did for a period of months. She’d call me, we’d talk and then I’d go back to sleep again. It didn’t keep me up at night. I thought, hey I can do this, so I decided to volunteer.”

Glenda’s 19 years as a volunteer

“I wasn’t there when they first started, when they were talking people down from a bad trip. That was where they had cots and people would come in and they’d deal with them. When I started, we were at the Beltline, then we moved to over near the Mustard Seed and then to 8th Ave. At the Beltline, would welcome in the odd street person. They’d come in and have a coffee and that sort of thing. We wouldn’t dare do that now.

“A shift was from 7 am until 3 pm, or midnight until 7 am. I remember doing midnight shifts all alone, and I’d maybe have seven calls. Drop-ins, they didn’t stay long. They were respectful, except for the day I had a drunk woman; the police had to come and take her away. She ended up kicking both of them. 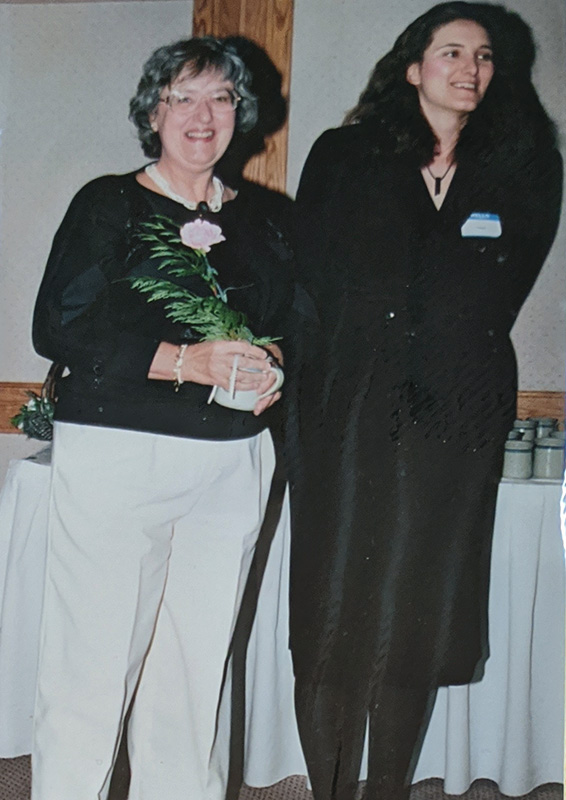 Glenda (left) receiving a mug and rose for her years of service in 1996.

“We did a paper recording of every call. There were referrals made for people, because there was no internet then or people didn’t have access to information. They would call us to find out about getting help from different places. It was the whole support scene, right from mental health to you name it, it just wasn’t anything like it is today. Everything is so accessible today.

“The only person I ever lost on the line was a woman who was a chronic alcoholic. She took a bottle of pills and we were working three ways, with EMS and so on. We couldn’t trace calls in those days. We knew the general vicinity, and then she told me, the post man is at the front door. EMS and police could zero in on her. She ran out the back door and they found her dead in the backyard. She was obviously very ill and had very severe problems.

“From 1983 to when I finished in 2002 it changed vastly. From just being one step away from a volunteer-driven group to being more formal, more organized. But certainly, the whole city scene has changed. You learn about yourself by doing things like this. You look back at certain situations, you think, if I had known then what I know now, I would have done better.

''From 1983 to when I finished in 2002 it changed vastly. From just being one step away from a volunteer-driven group to being more formal, more organized. But certainly, the whole city scene has changed. You learn about yourself by doing things like this.'' - Glenda Nyberg

“From what I know of what Distress Centre is doing now, I think it’s still the quiet support that has always been there for people. Obviously, you’ve changed with the needs of people. People now send an email or chat and have it replied to. I was there when we had the first computer set up and it was minimal. It had references on it and that’s all.”

“I stopped volunteering after 19 years because my husband was very ill and I was hanging on by my fingertips. He died not too long afterwards. After he died, I went to volunteer with Victims’ Services with the police because it was the closest or similar situation; court support and victim assistance. I did that up until just a year or so ago. I knit now for the Stephen Lewis Foundation and the money we raise through our handicrafts goes to the grandmothers in Africa. They’re raising their grandchildren because of the HIV epidemic. 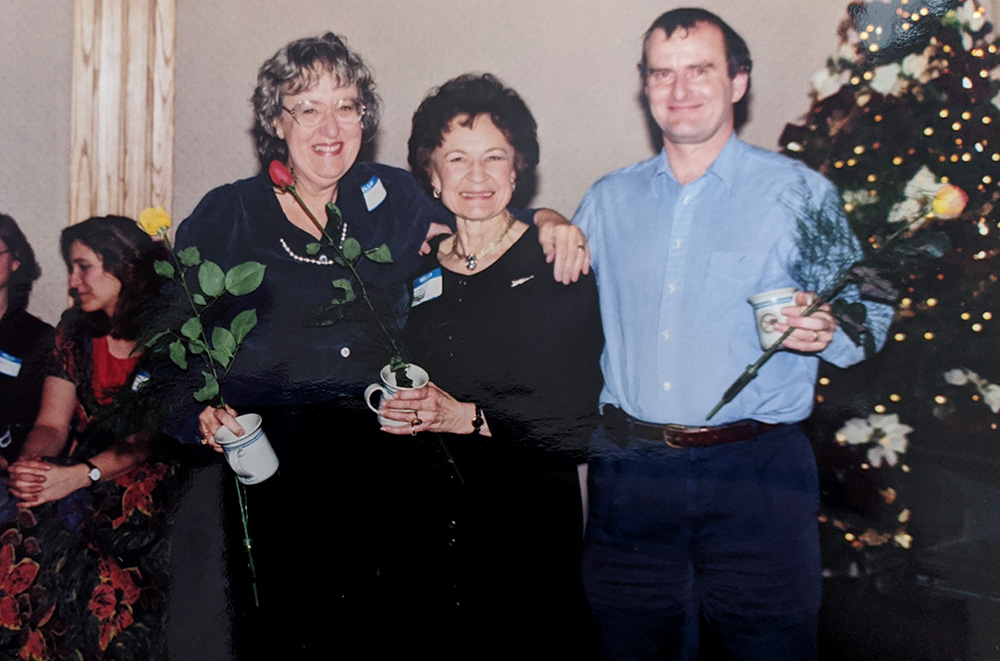 Glenda (left) and other volunteers receiving gifts in appreciation for their years of service in 1997.

“Being 85, I’ve lived through so many changes, but it’s fascinating, which gives me hope for the future, that we can fix anything if we have the will to do it. We shouldn’t feel negative about the future. So much is negative of what you hear on the news and see on the internet. But there’s so much wonderful stuff happening too. People are so good and so kind. We have to keep reminding ourselves of that, it’s very important that we don’t let the dark stuff take over our lives.”

''From what I know of what Distress Centre is doing now, I think it's still the quiet support that has always been there for people.'' - Glenda

In 1995, Glenda spoke at the Distress Centre’s 25th anniversary celebration, accepting a plaque from Alderman Longstaff honouring the agency for 24 (hours) for 25 (years): “Not only have we provided excellent service to our clients but we became more caring and competent in our own lives. It is a privilege to be a Distress Centre volunteer and I highly recommend it to anyone.”

A 1996 Newsletter summarized her long service to the Calgary community:

“Glenda has done every shift, and it wasn’t that long ago she even did another midnight shift, during Christmas. Glenda has supervised a number of volunteers. Glenda also acts as a resource volunteer, you can call her if you need assistance on debriefing or policy issues. Glenda still maintains a sense of humour, despite having dealt with every kind of call imaginable. And just the other day, Glenda took home an agency plant to repot and clip.

“Now that is dedication.”