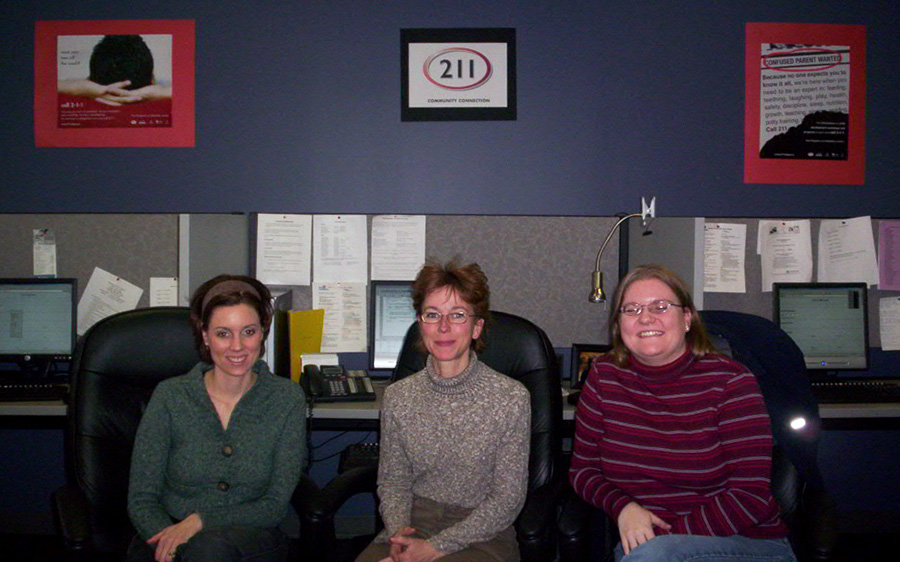 Many people who call Distress Centre are looking for information to solve immediate problems. Social issues often require assistance from multiple organizations, who unlike Distress Centre, may not be open 24/7. In 2003, Barb Litchinsky began talking about a solution to this issue through a partnership with Distress Centre and the 211 information service, announcing plans for a soft launch with partners Calgary City Council, the CRTC, Inform Canada and the United Way. 211 was to be answered by specially trained staff whose primary role was to assist people in finding and accessing appropriate community services. At the time, Toronto had the only 211 line in Canada. 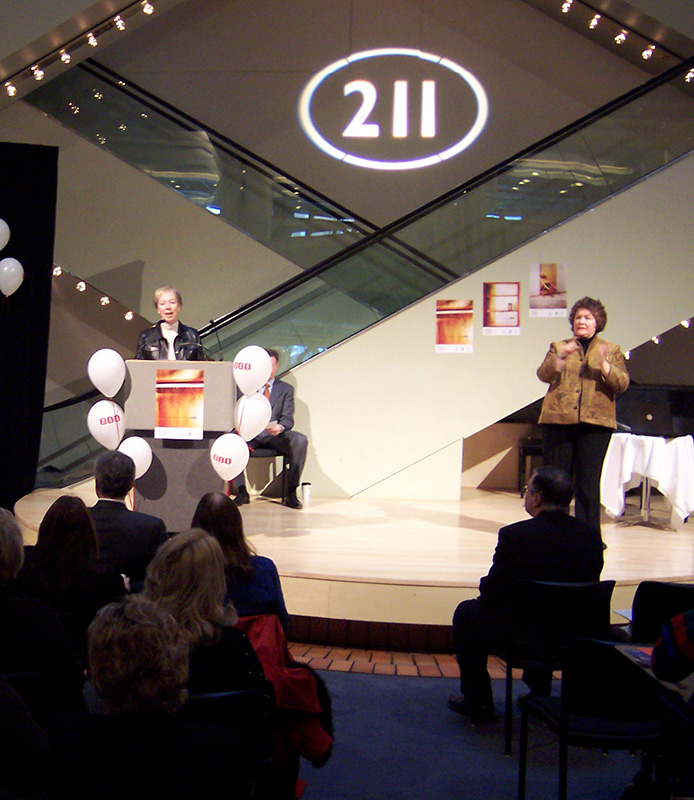 “The City of Calgary told me they wanted someone to take all the overflow calls for any organization that needed coverage 24/7. It was going to be the three-digit phone number 211 for access to information and social service agencies.

“I went to Ottawa, because we had to get CRTC approval. We had to get accredited and permission to set up the line. It was a major deal to get 211.”

Soon we were receiving 3500 calls per month, which was a 50% increase in calls. One out of five calls were from someone looking for food, clothing, shelter or financial assistance.

Paul Bartel was put in charge of making 211 happen at Distress Centre. Paul speaks to his work:

“I started with the 211 project as a practicum student. I did some of that early work. We had the benefit of being able to learn from Toronto. We were just serving Calgary, but we knew we eventually wanted the service to be provincial. Edmonton launched just ahead of us. 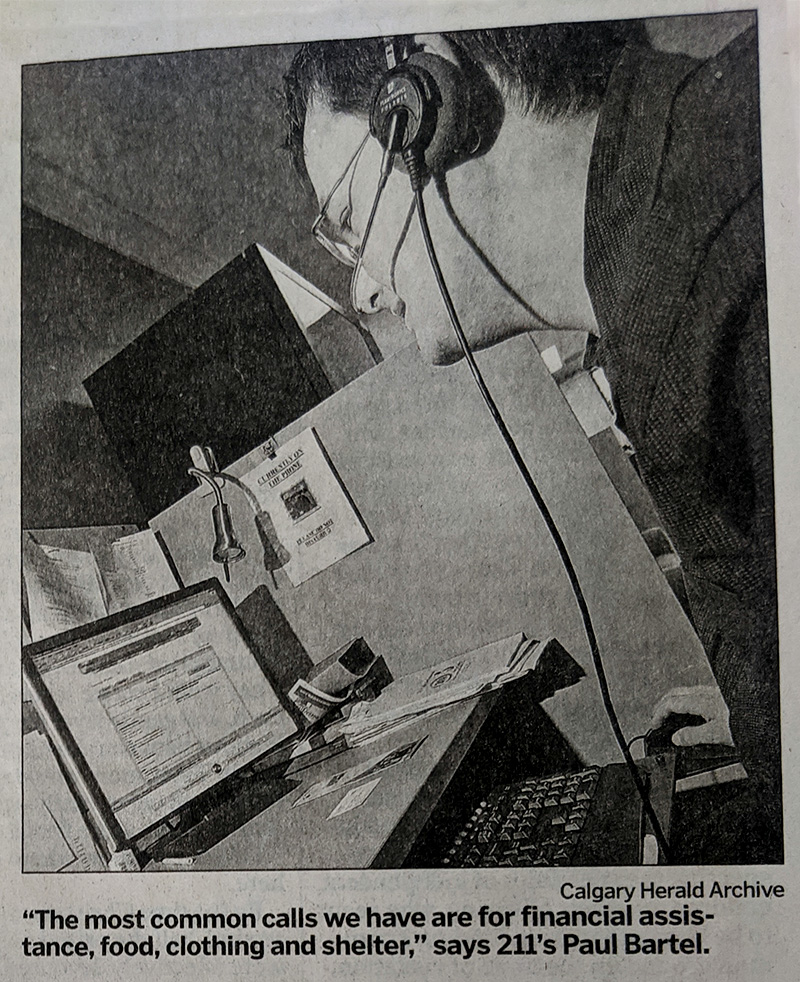 “The early months were figuring out the logistics regarding the service, standards, staff needs, training, accreditation and the certification process. Our partnerships with the City, who were paying and who had the data base, and the United Way, who owned the trademark, also had to be negotiated. We did not start 24/7 but we did meet the minimum standard, which was 70 hours a week.

“DC volunteers did not answer the 211 lines so we had to cross-train the paid staff who were in the call centre to support the volunteers. 211 has always been a paid staff position.

“We interviewed quite a few of the volunteers for the new role, and it was a little surprising to find that most of them were not a good fit.

“Management of the partnership was a pretty big piece of my role. The United Way’s focus was on the marketing and communication of 211 and they took the lead on how we roll this out to the public. I worked with the City because they had the information and data base and we needed to understand how to search it effectively.”

Paul continued: “One of the first big 211 moments was when we had a call from someone after a long weekend, looking for the number for the food bank. The person who got the call said, ‘I can give you that number, but hang on, what do you really need?’ He spent some time talking with the caller, and got this horrible story about a couple who had spent the weekend with no food in their house and were in pretty dire straits. The caller was told about a service that could come out and talk to them right now, and we made that happen. We were able to go back to the United Way and City of Calgary and say this is what the value of 211 is. It is not about phoning 211 to just get info, we are also going to examine the whole situation and de-escalate the crisis. This was key.”

''We were able to go back to the United Way and City of Calgary and say this is what the value of 211 is. It is not about phoning 211 to just get info, we are also going to examine the whole situation and de-escalate the crisis. This was key.'' - Paul Bartel

In 2006, Distress Centre was granted accreditation from Alliance of Information and Referrals Systems, after an intense 3-year process. “211 was separate from the crisis lines. They did their own thing. We had been trained to use Inform Alberta to look for resources but we weren’t encouraged to transfer to 211 or consult with 211.

“I remember one 211 call that was really intense. A woman called saying she was scared of her nephew. I helped 211 do a safety plan and asked her if he was in the house. She said ‘no, but I think he’s coming.’ I told her to lock herself in the bathroom. We called 911. The nephew returned, breaks down the door and starts hitting his mom. Eventually the phone disconnected. Luckily, we had called 911 and they were able to get there.”

Cantonese and Mandarin were the top two other languages spoken by callers, so DC saw a need to offer support in 150 languages through a translation service. Calgary Immigrant Aid helped DC by translating 211 brochures into a number of other languages. 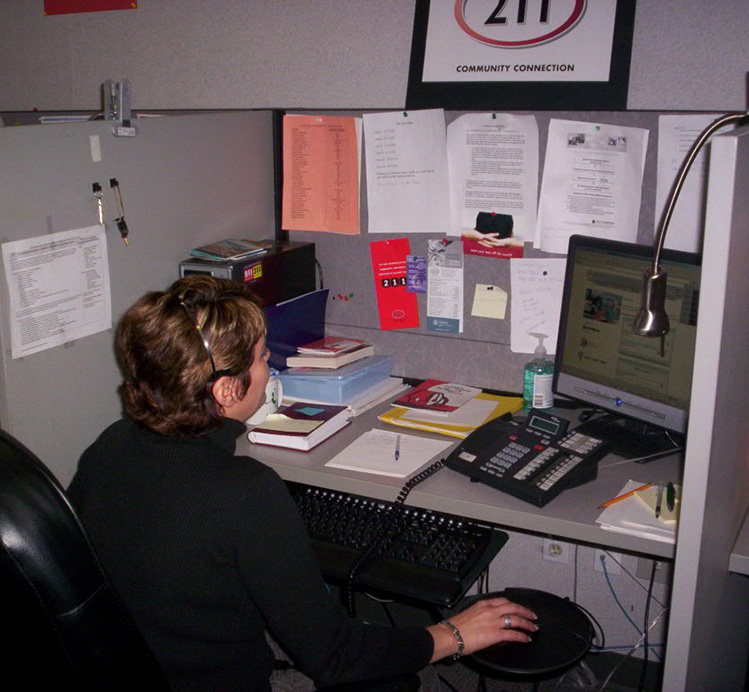 In February 2007, Distress Centre received the United Way “Spirits of Gold: Together We Can” Award for their 211 work. At the end of 2009, 211 reported that “streamlining the financial aid process and increasing the scope of our services and partnerships was one of the biggest achievements.”

Heather Innes, then working for United Way, sums up the impact of 211 over time:

“I have referred a lot of people to 211, because I think it is such an invaluable service. It is one of the most powerful services that we have in our city, from the perspective of people being able to find what they need without being passed to 5 or 6 different organizations and having to tell their story to 5 or 6 different people. And the fact that they can access it in their language is phenomenal.”

''I have referred a lot of people to 211, because I think it is such an invaluable service. It is one of the most powerful services that we have in our city, from the perspective of people being able to find what they need without being passed to 5 or 6 different organizations and having to tell their story to 5 or 6 different people.'' - Heather Innes

211 continues to serve Calgary (a future story), and never more so than during the current pandemic where accurate, easily accessible information and resources are available to everyone 24/7.