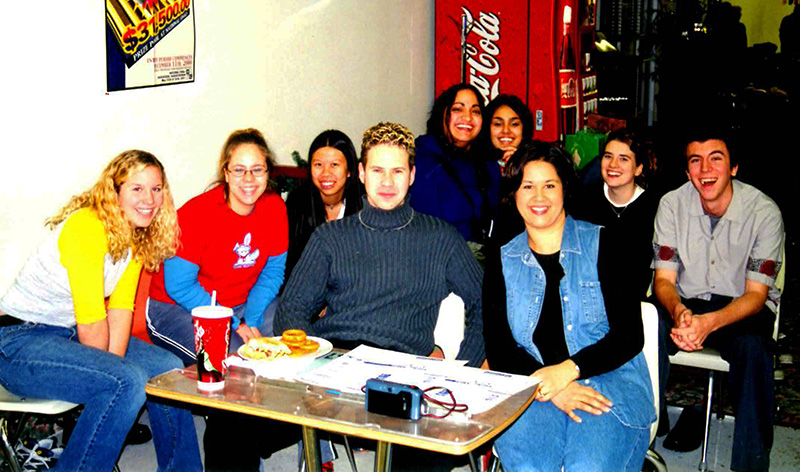 In 2005 the Distress Centre’s youth program was named one of the best youth volunteer programs in the city by Volunteer Calgary’s Youth Council. Nevertheless, with the many advances in technology that came mid-decade, the teen lines needed an upgrade. In cooperation with Calgary Urban Vibe, a website was designed to give young people a greater voice in the community and for youth to share information about more than 400 local programs, events and issues. 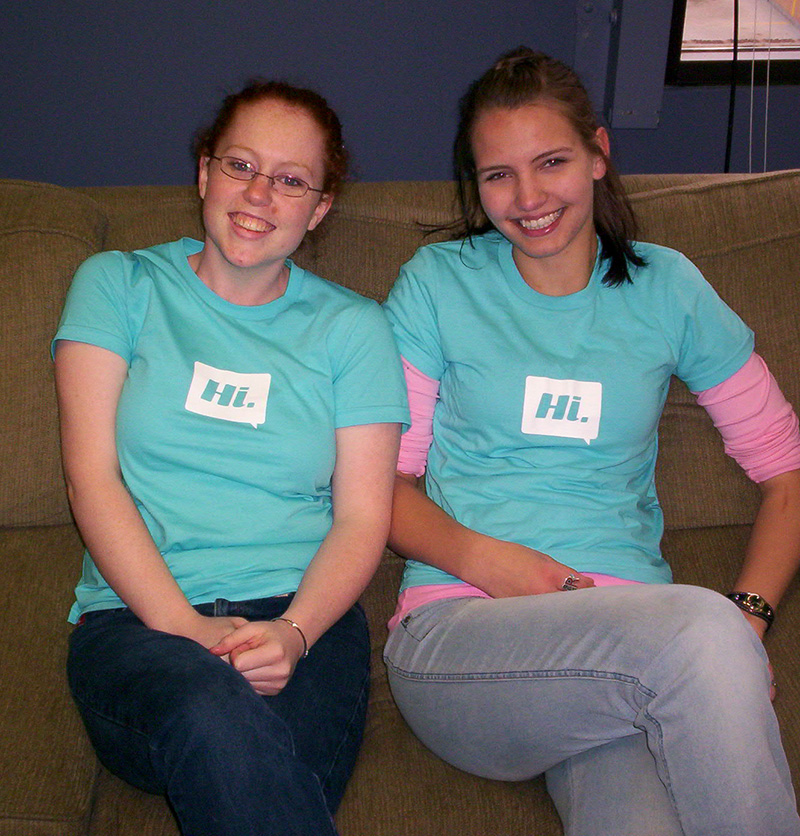 If a teen posed a comment or question on the website, a youth volunteer would then respond. The Teen Line Vibe was an “email support system and bulletin board run by the Distress Centre. Through the Teen Line, youth can find peer support and professional advice about everything from health and teen pregnancy to counselling for family violence and addictions.” In May of 2005 a bus and radio ad campaign, “I Am the Owner of Me,” increased visibility and calls.

Jessica Cope (Williams), a former Teen Line volunteer, was appointed Coordinator, and she reported “…we’ve found a way for youth to access support in a way that they feel comfortable – and that’s a big deal.” Jessica describes her experiences:

“I came in as staff when they were just exploring the online idea, Calgary Urban Vibe. It was a collaborative project including Child and Youth Friendly Calgary (now Youth Central). It was the first on-line hub. Their vision was one website that youth could go on to and find whatever they needed.

“We next moved to setting up for on-line chats, no texting. We had to retrain the volunteers. Now there are all kinds of standards of practice for e-counselling, but we didn’t have anything like that. So, we worked at adapting the Roberts’ model of crisis intervention to an on-line environment. We had to match to the decision trees as well. It was an on-line submission form, and the person got an email back within 24 hours. I was there just at the launch, maybe one or two messages on a shift, the majority was still on the phone.”

The evolution of the Teen Line 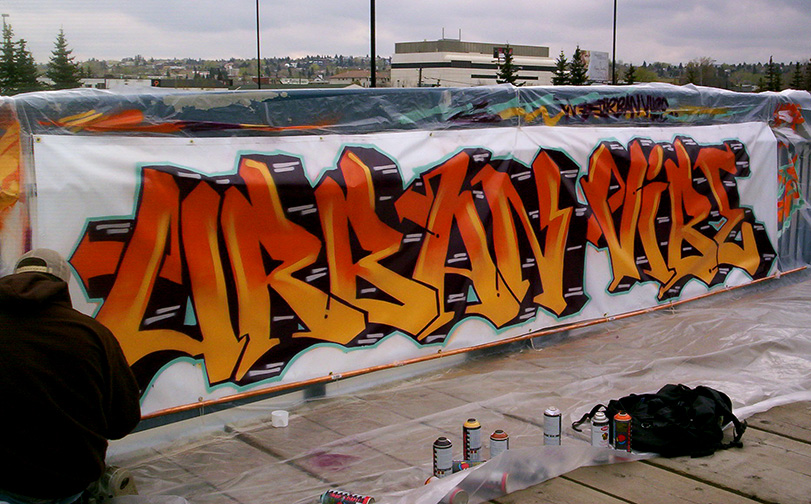 Karen Gallagher-Burt, volunteer and eventually Program Manager, speaks to the evolution of the service:

“The youth drug line had just finished, by 2002 it was absorbed into the Teen Line. Someone who was well enough along in their recovery that they were ready to volunteer, we didn’t then need to distinguish between a specialized drug line and the general peer support line. We brought chat onto the Teen Line about 2010 and we were just moving towards adding texting as I left (2013). That was driven by community. We knew that kids were not phoning as much. They wanted to text and have more anonymity. The minute we added chat, it was split half and half between teens and others, because we discovered others wanted it too. It was about 6 months later they then brought chat on to the regular lines.

“My son worked the Teen Line 2007-09. His favourite call on Teen Line happened when we had some funders come through, and we wanted to show off the kids and what they knew. Everyone else had a dramatic story to tell them, suicide or abuse, my son’s was a little less intense. A boy called one day, and he was whispering ‘I need some help, I’m hiding in the bathroom. I’m at my friend’s house.’ He was 12 or 13. ‘My friend is smoking dope and I don’t want to smoke dope with him, but I don’t know how to leave or what to do.’ I was the Phone Room Consultant that night, so my son took his number and he told the boy to pretend when I called it was his mom calling and telling him he to go home. 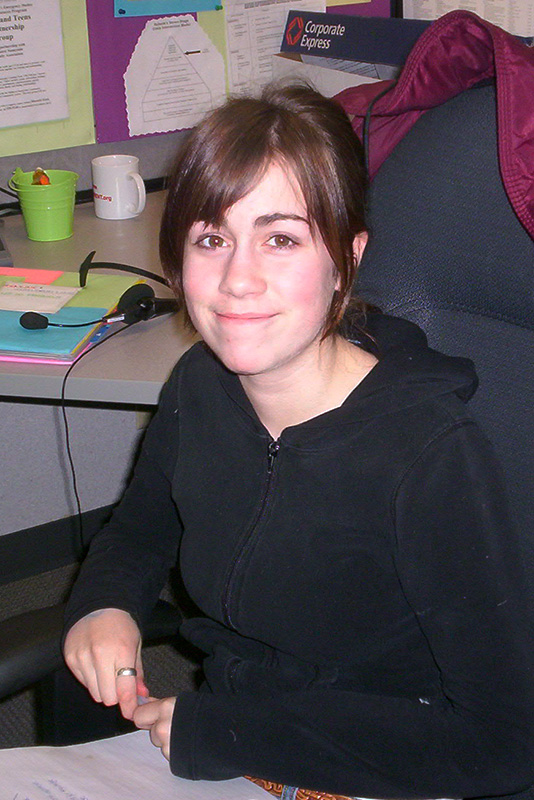 “So, I called and he put on the fake ‘oh no, I have to go.’ He got home and called the line back again, and my son got the call. The boy was crying and said ‘I just didn’t know what to do, thank you.’ And my son said you did a really good thing, but you might want to talk to your parents. He was just trying to make a good decision and panicked, and called the teen line.”

“The training was multiple weeks, based on different topics each week, the same training as the adults with some stuff specific to teens. It is so easy as an adult to say to a teen your life will be better, this is just the hardest time of your life, but I think when you are a teenager and going through the same things as the person calling you, it is a lot easier to relate and be empathetic, and supportive.

“We had a binder of what to do in a crisis. I never felt alone on a call. I felt like I could turn to someone and, silently or not, say this is not going well, or I am worried about this one. We were quite supportive of each other as a teen volunteer group. We had parties together. Overall, the experience was so positive. You felt like you made a difference on most of the calls. The hardest part is not knowing the end, or if there is no resolution.”

Lawrence Ferguson adds to the story:

“My mom volunteered there first, and I heard about it from her. I was on the Teen Line, the Youth Drug Line, and Out is Okay, once they launched. We had separate numbers still, you just answered whatever calls came in on a line.

“Probably our calls were 50/50 youth and parents. The kids that called, meth was starting to be a concern. They often felt completely isolated, lots of anxiety about how they looked, afraid to be out in the public. More acute distress about something than wanting to create a solid plan, mostly just panic. 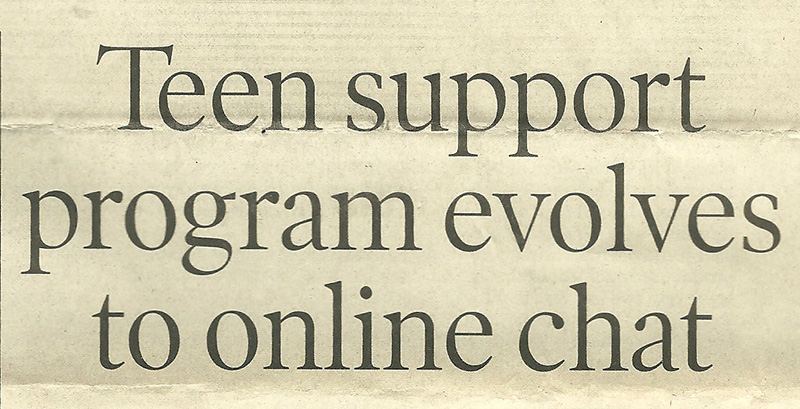 From a 2011 newspaper announcing the launch of ConnecTeen.

“There were a lot of parents concerned about kids with addictions. They did not know what to do about it, they were at the end of their rope. We were the last safety net, where someone would try and work on your problem with you, no matter who you were. We were in with 211 at the time, we had all the resources and referrals right at our fingertips. We offered free counselling for those who needed it, if they came in. We would patch people through to the Mobile Resource Team or Crisis Resource Team if it was urgent.

“They did a really good job of making us comfortable in a small room. There were places to sit and hang out between calls, or take a break. There were always people willing to talk, like about what I wanted to do in the future for a career. There were a ton of resources for building capacity in volunteers. I have nothing but positive things to say.” 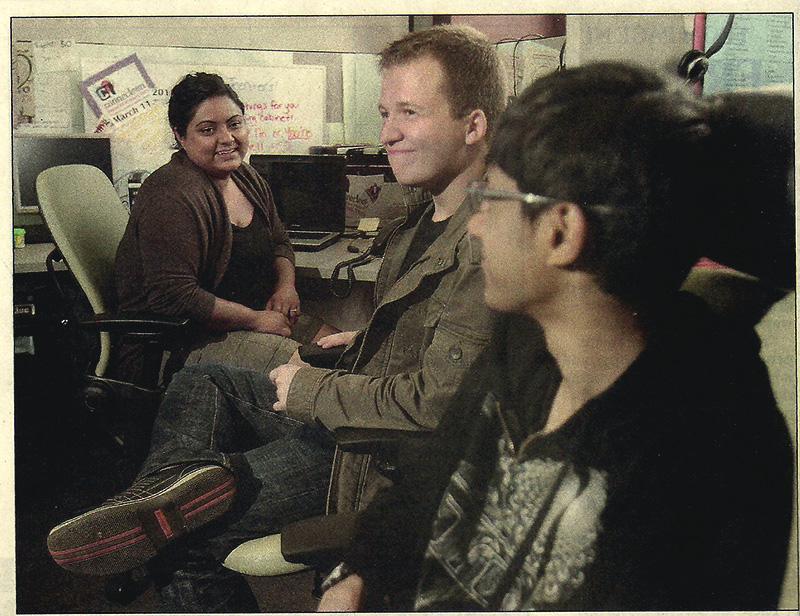 A 2011 newspaper article on ConnecTeen.

The desire to keep meeting the needs of the teen community was a constant, and a driver of change. Carol Oliver, Executive Director in 2008, made the following comments as she started to look at adding chat and text:

“Staff were worried about decline in youth callers, creating once again an opportunity to rethink, relaunch and re-vision the Centre’s teen program. We didn’t want to give up on it, we just felt that it was up to us as an organization to monitor changing conditions in the community, and to continue to offer the service, and to offer it in new ways.”

By 2011, The Teen Line was fully integrated with all forms of communication technology, and was renamed ConnecTeen, as it remains today.