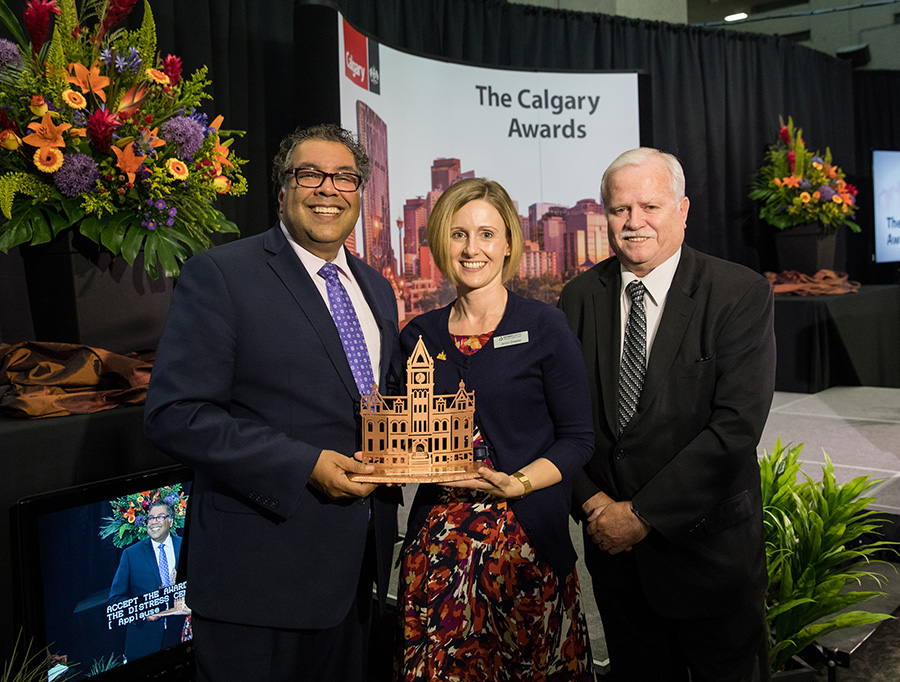 At the start of 2010, no one could have predicted that Distress Centre would be delivering services off-site during a pandemic in 2020. Change and growth of other kinds, however, was inevitable. Current Executive Director, Jerilyn Dressler, opens: 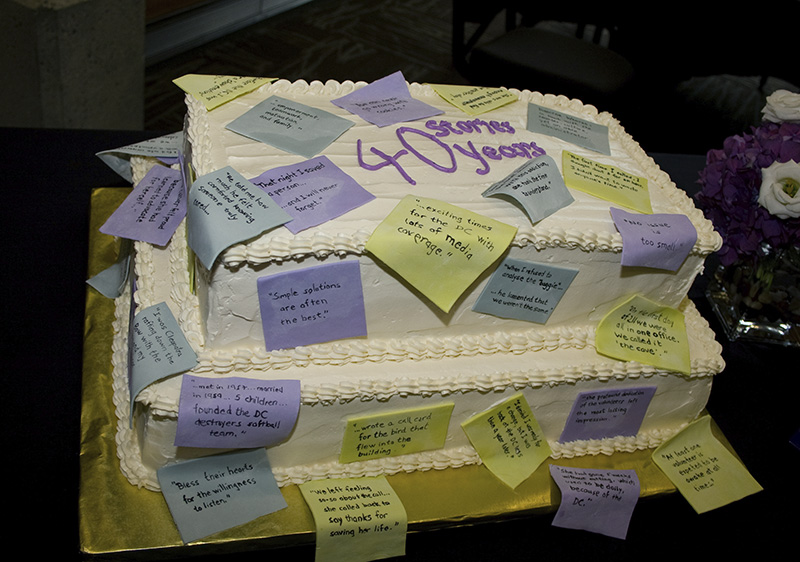 The cake from our 40th Anniversary Celebration in 2010. Created by crisis line volunteer, Laura.

“We have grown, changed, and brought on great partnerships. I think of all the work we have done for the 211 Alberta project. Huge setbacks, starting over, different players at the table, but it is really neat to see long-term goals come to fruition. The National Suicide Prevention service, Joan worked on that for 15 years, became reality in 2017”.

Our focus is on ensuring that everyone, regardless of the issue, has a place to turn to, barrier free, 24 hours a day. We are not here to judge, we are here to listen.

Growth and strategy in the 2010s 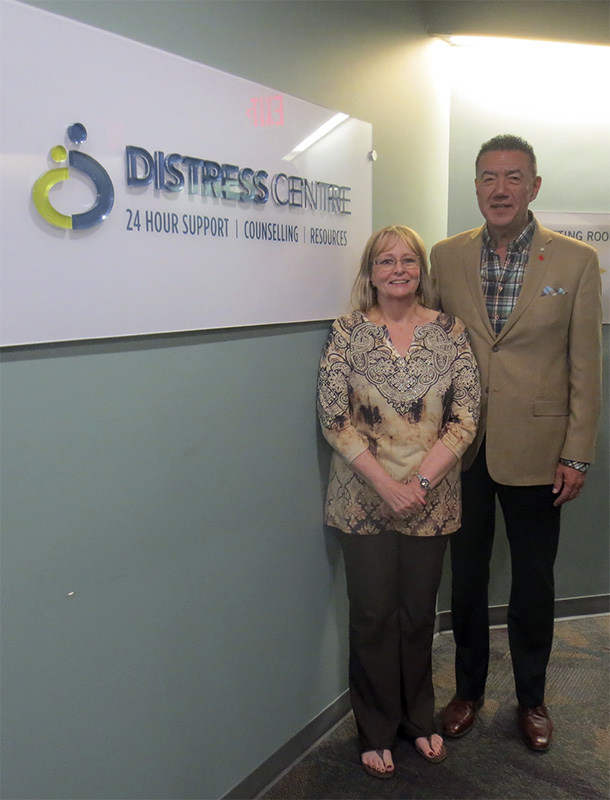 In 2014, under Executive Director Joan Roy (whose story comes later) 3 underserved groups were identified: seniors, immigrants and newcomers, and Indigenous clients. Strategies were identified and implemented to reach out to all, including a new partnership with Sunrise Native Addiction Services. By 2015, the Distress Centre was responding to over 100,000 contacts a year via calls, chats, emails and face-to-face counselling.

A second Social Return on Investment (SROI) Case Study was funded by the Herron Foundation. Bill Herron comments: “It seemed that at the time, if you were fundraising, this seemed to be something that would hit the mark with businesses. They all like to leverage the return on their money.” The study noted that by individuals contacting Distress Centre instead of police or emergency rooms, significant money and other resources were saved. Distress Centre was identified as the hub for the social sector, responding to after-hours calls of partner agencies and those that did not have 24-hour infrastructure. The SROI was calculated at $7.42 returned to the community for every dollar invested, up by $2.00 from the previous study in 2007. Top concerns from clients at the time were: depression and anxiety, relationship conflict, domestic violence, suicide, and employment and financial issues.

In 2017, Distress Centre was honoured with the Voices of Calgary award from the Government of Alberta, given to employers actively engaged in workforce diversification. Then, as now “We hire people based on their competencies and skills.” They also received the City of Calgary Award for Community Advocate Organization in 2018.

Partnerships continue to be integral to the work of Distress Centre. Dean Soenen, Director at Woods Homes, recalls their ongoing partnership: 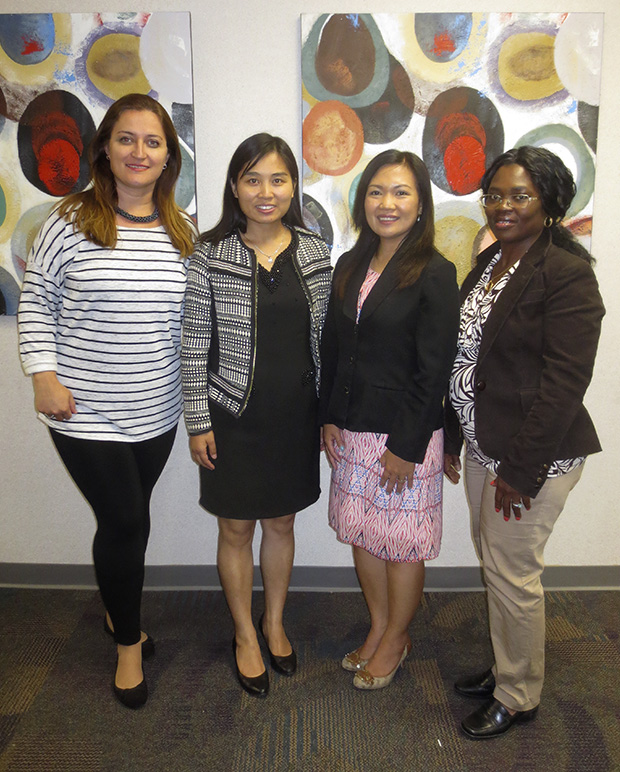 “Our CEO happened to be at a function at the University. They were really struggling with meeting student needs after hours. We ended up having a meeting with Joan Roy and U of C, and developing a partnership where we jointly provide their after-hours coverage. Mount Royal and SAIT also provide this service.

“The Mobile Resource Team (MRT) is part of Alberta Health, and Distress Centre takes the after hours calls for them. The Crisis Resource Team (CRT) at Woods is telephone, text and chat and does a mobile piece, more with teens and families. Our phones go over to DC at 11:00 pm and we take them back in the morning.”

2016 brought a partnership with Calgary Immigrant Women’s Association (CIWA), whereby women gain Canadian work experience by interning at Distress Centre. Cristina Balamban, then HR Manager at Distress Centre, is from the Philippines and started as a DC volunteer through CIWA. “It is a win-win for DC and the student. These are highly professional women who just need more experience and a reference from a local employer.”

“About 3 years ago, The Way In Network was formed. It’s four agencies that supply system navigation support to seniors across the city. For about 2.5 years we ran a centralized intake line. We began conversations with DC and we realized how much more advanced DC was in terms of call centre management, compared to what we were doing. We started a formal partnership in 2017, where DC took all our 403-SENIORS calls, and we have been working with them for the past 3 years to build on and improve that process. 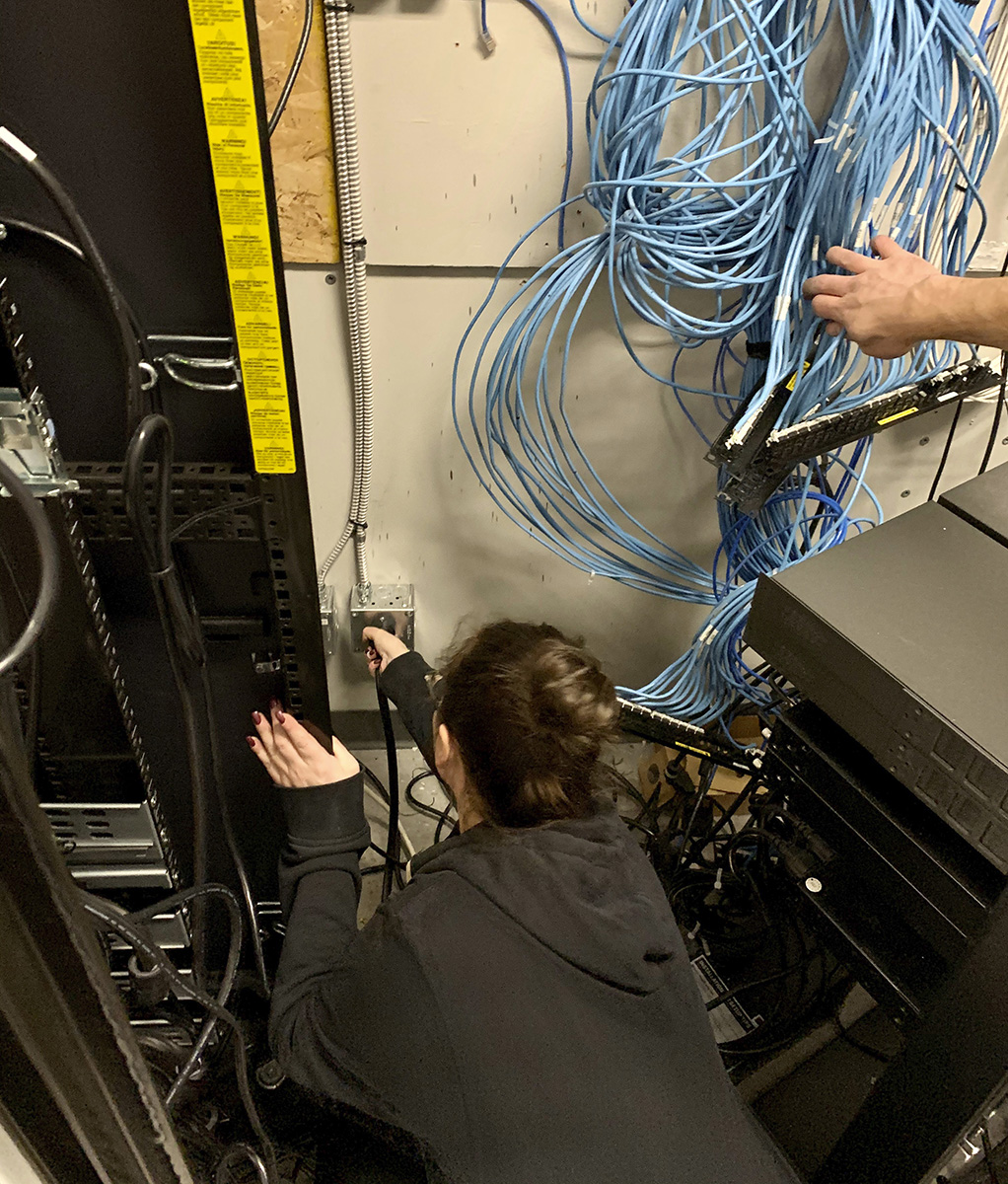 Director of Operations, Robyn Romano, “pulling the plug” at our old office during our move. We took our last crisis call and 211 call at noon on January 31st, 2020.

“It has been a great partnership in that DC has shared their expertise and learnings around call centre management, and carya and other partners have been able to share their expertise in the area of seniors.

“One of the advantages of this partnership is that we can step in to support the 403-SENIORS calls and try to centralize senior concerns during difficult times. We also have access to the Basic Needs Fund for our clients.”

February 2020 brought a much-anticipated move to a larger, brighter and newer space located downtown with easy access for clients and partners.

“The move was exhausting, but such a good move for us as an organization. It allowed us to have a little bit of a refresh and reset. It allowed us to be in an updated space with updated technology. I don’t think our move to working remotely during the pandemic, or our subsequent move to office re-entry starting June 15, would have been possible had we not moved to the infrastructure we have now.

''The move was exhausting, but such a good move for us as an organization. It allowed us to have a little bit of a refresh and reset. It allowed us to be in an updated space with updated technology.'' - Robyn Romano 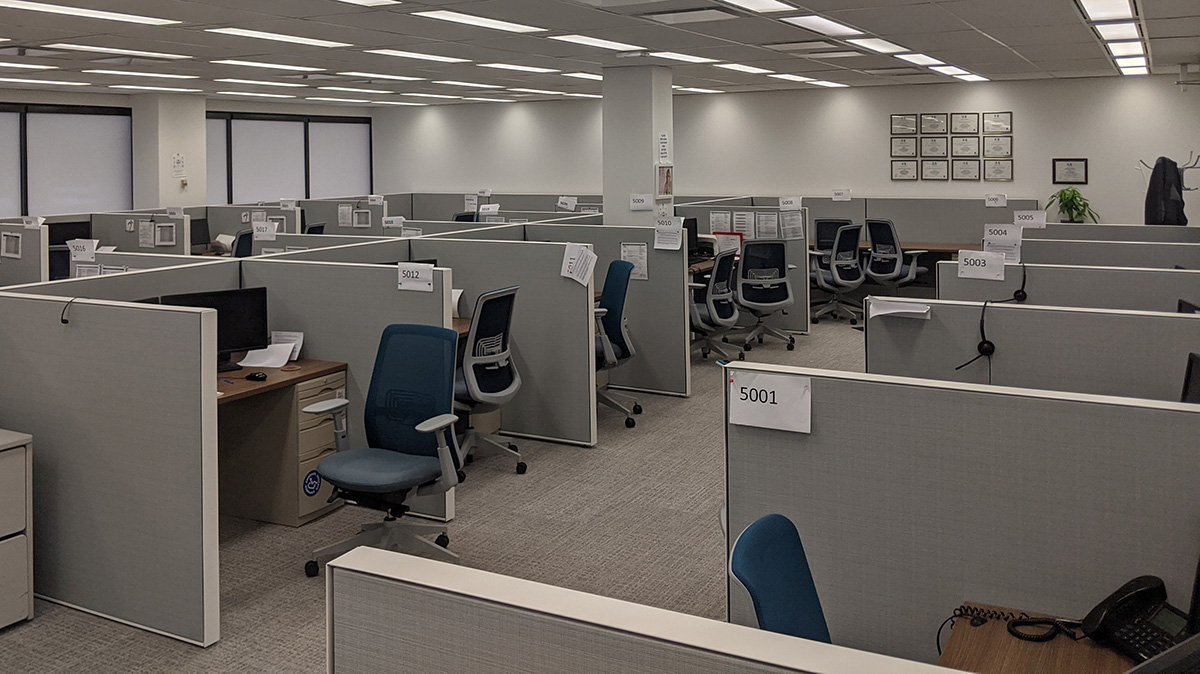 Our new office in March 2020, sadly sitting empty after we took our operations remote due to the COVID-19 pandemic.

“The old contact centre would not have allowed for the same amount of physical distancing that we need. We did not have fibre optic internet, and it was a huge cost to build it out. Now being remote, we are relying on cloud-based systems which we did not have set up in the old space, because the internet was so unreliable.”

Neil Horbachewski, donor and volunteer commented: “The new place is fantastic. It feels spacious, it has windows, when I do 6:00 – 9:00 am shifts I get a sunrise. It feels open and refreshing and it makes a difference.”

The good news is that we did not interrupt our 24/7 service when COVID-19 hit and we had to move to working remotely.