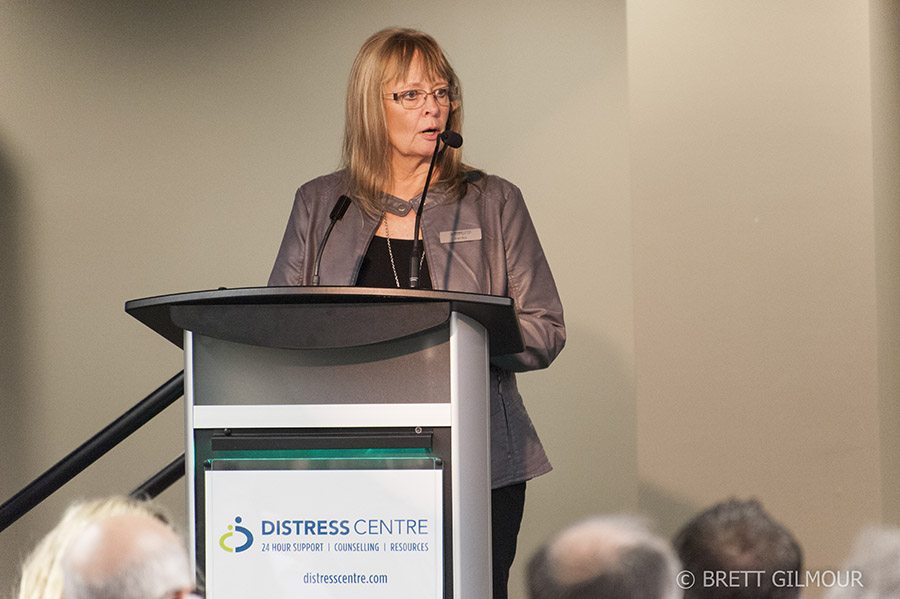 Image: Joan Roy speaking at our 2014 Lend An Ear Breakfast.

The unfortunate passing of Executive Director Carol Oliver brought a period of leadership instability to Distress Centre, until the Board appointed 25-year staff member Joan Roy to the ED position in June 2013. Joan recalls the offer: 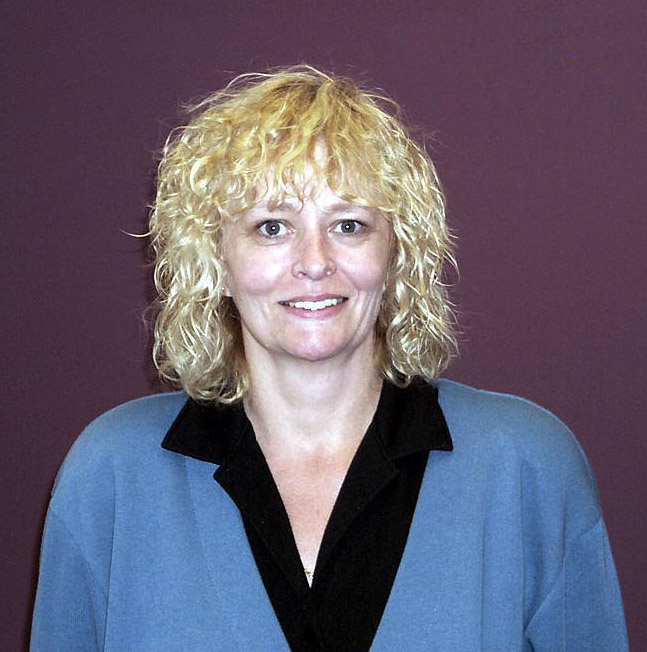 “I moved into the ED position at the Board’s request. Unfortunately, the year a temporary ED was there, there was quite a bit of angst, internally and externally, as well as with our funders. At that point I was the VP of operations, and the longest serving employee. And because of the pilot project in 1999, I had worked with so many of the agencies, and I had personal contacts, it was not a difficult transition as far as relationships in the community.”

Joan started as a practicum student in June 1992, with a warning from Jeanette McEachern: “Don’t expect me to give you a job after the summer student funding runs out, we just don’t have any other funding.” Fortunately, the crisis counselling intake worker position was created which was offered to Joan.

In 1999, when Distress Centre was provided funding to lead the Calgary Crisis Services Pilot Project – a project to work with other community agencies to better coordinate crisis services in Calgary – Joan led project. It laid the foundation of how the DC operates today. The agency accepted the role of experts in crisis, and later advocated that Distress Centre’s crisis lines and 211 be considered as the optimal agency and hub for Calgary to deliver 24 hour services.

“I was very shy. I remember saying to Barb, I can’t do the crisis pilot, I can’t speak in public. We went to one meeting at the City soon after I was in the position, and I was very nervous. There were all kinds of high-level funders and it was the first time I had ever been in a meeting like that. She just said fake it til you make it.” 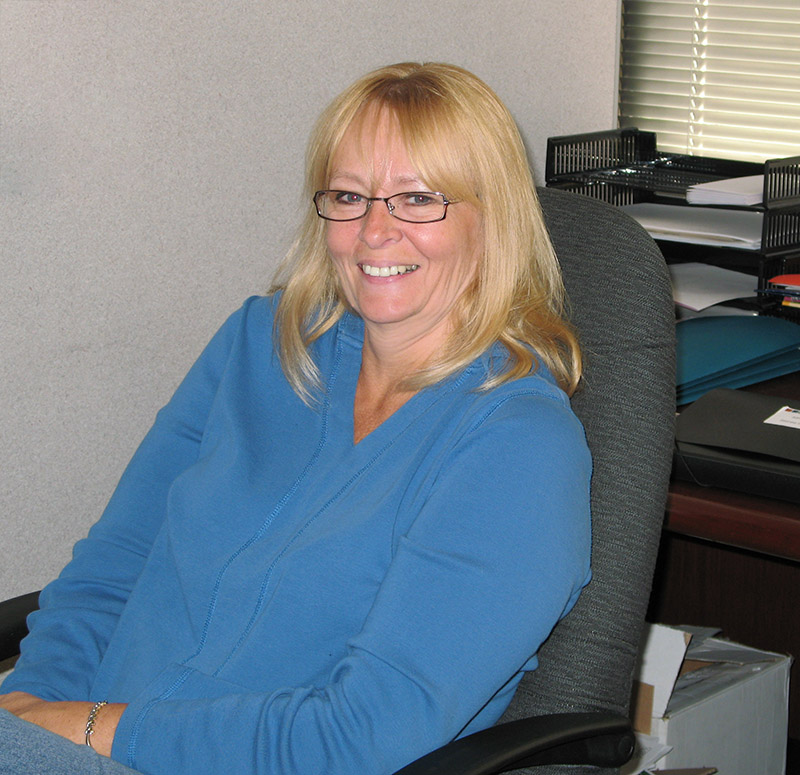 One Human Resources degree later, Joan became Manager of Human Resources in 2007 and then a Director that included a lot of responsibilities that would typically fall to being second in command.

Karen Gallagher-Burt worked with Joan as they both moved through many staff roles:

“She never wanted to be ED, which is what made her so good at it. She was such a good collaborator. Some of it was from her Indigenous background.

''(Joan) never wanted to be ED, which is what made her so good at it.'' - Karen Gallagher-Burt

“All the good skills that I needed to learn, I learned from her. Like when we’d go to a new meeting with other organizations, you need to be quiet and listen. When you are ready to share something that might be of relevance, you consult the people that are there. You find someone who has the natural power, before you share your wisdom. She taught me to shut up and really feel what is going on and really hear people before I thought I knew anything. 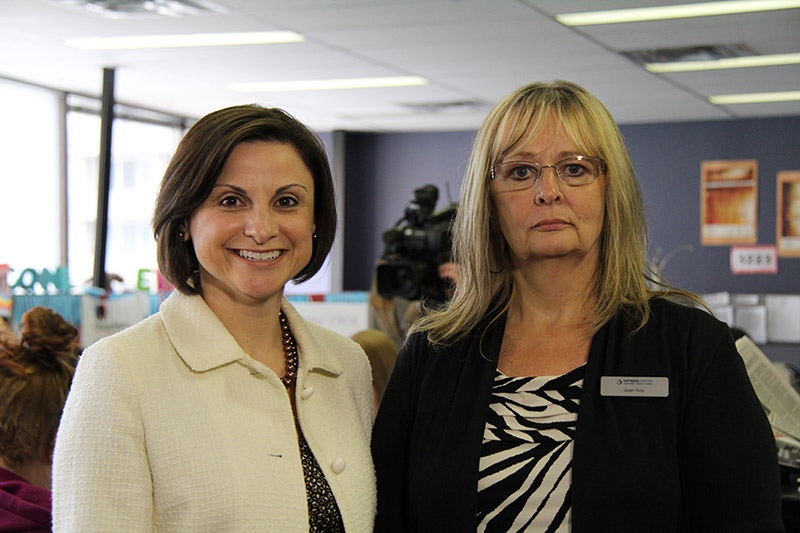 Joan Roy (right) with Gianna Manes, CEO at ENMAX, at the ENMAX partnership announcement in 2013.

Reflecting on a 25-year career

Joan reflects on her long career: 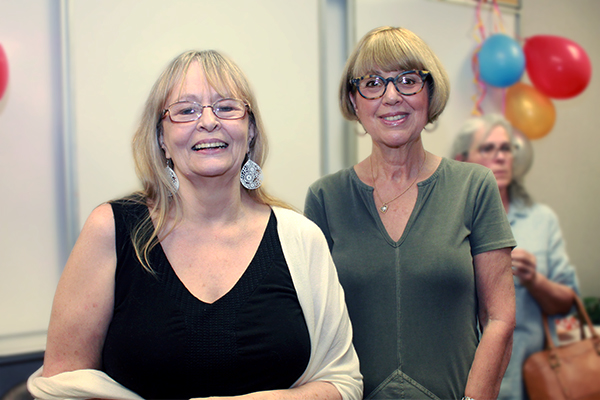 Joan Roy with Barb Litchinsky at Joan’s retirement party in 2017.

“You have to get to know your staff. Identify those who have the skills and show initiative around problems and solutions and who do things that might be outside of their job description.

“Just having an open-door policy, I know that is a cliché but I very much believe that folks need to have access and conversations. In a crisis agency, it is not unusual for staff to be in crisis themselves.

''Just having an open-door policy, I know that is a cliché but I very much believe that folks need to have access and conversations. In a crisis agency, it is not unusual for staff to be in crisis themselves.'' - Joan Roy

“I used to do the training on suicide for the volunteers. I stumbled across this call card, and I thought this is the perfect example for the volunteers to understand what we do and that you don’t always know what happens to these callers. A woman had called in, in very low place. Her husband and child had been killed in a car accident. She was calling because he was suicidal. We intervened, and she was hospitalized and she was not a happy camper. She called and complained that we ruined his life.

“Then she called back one night at Thanksgiving, and said, this is my story, it still hurts, but because of reaching out to your volunteer she was getting along and there were a few bright spots in her life. She was phoning to wish all the volunteers a Happy Thanksgiving. And for me that sums up what we do and the impact we are going to have. 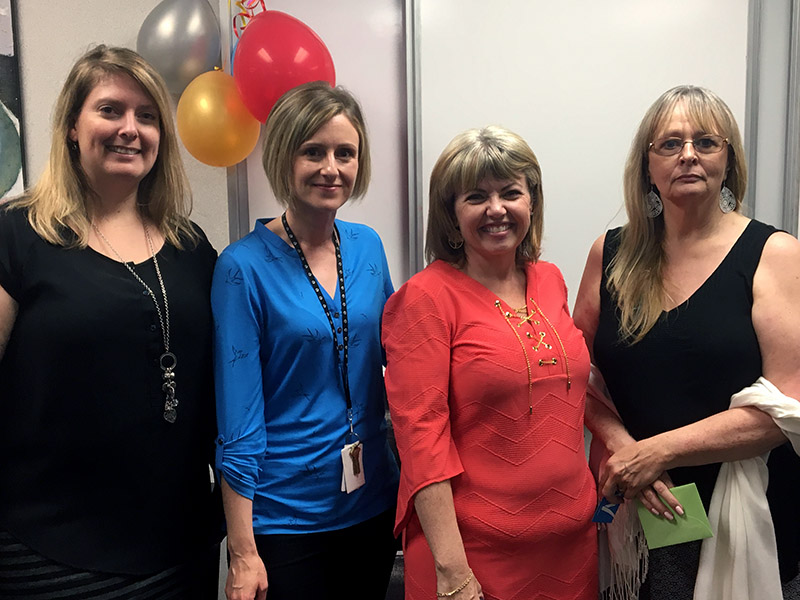 “The key role for the ED is partly around being a link between the Board and management, and sort of working with management around what the Board’s expectations are. Making sure you have a strong second and third in command.

“Distress Centre teaches our staff and volunteers how to help our clients and callers, and all of us take those learning into our communities, friendships and families. We try our best to live our vision of ‘Everyone is heard.’

“Working at Distress Centre has been a gift that I will always be grateful for. It not only improved my skills dramatically, my family noticed the change, and so they had a lot of confidence bringing things to me, or suggesting their friends talk to me.”

In retirement, Joan moved to a small town in BC. She is still using her Distress Centre skills, as she meets new people and forms a new sense of community.