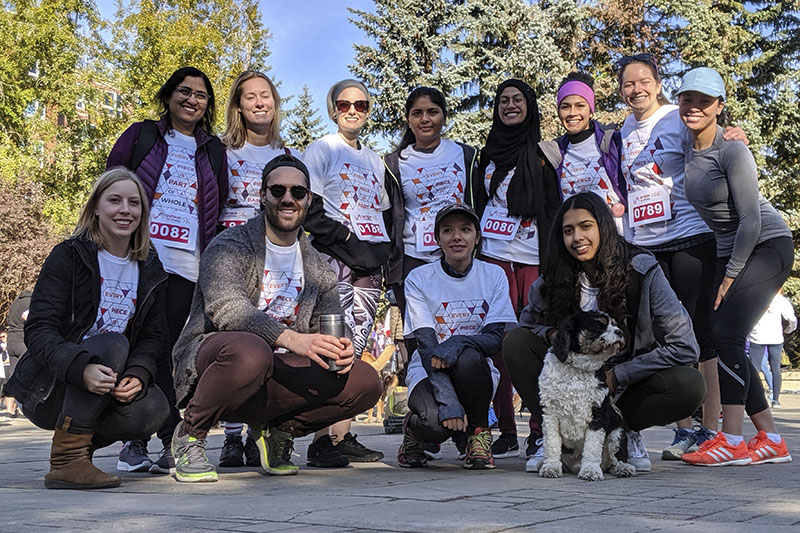 Image: The Distress Centre staff and volunteer team at Outrun the Stigma 2019.

A partnership between many different organizations and individuals created the initial Drug Information Centre in 1970, and partnerships continue to be vital in enabling the current Distress Centre to serve the community. Some partnerships provide financial and personal support, while others provide joint services to clients. The story that follows touches on just a few examples. 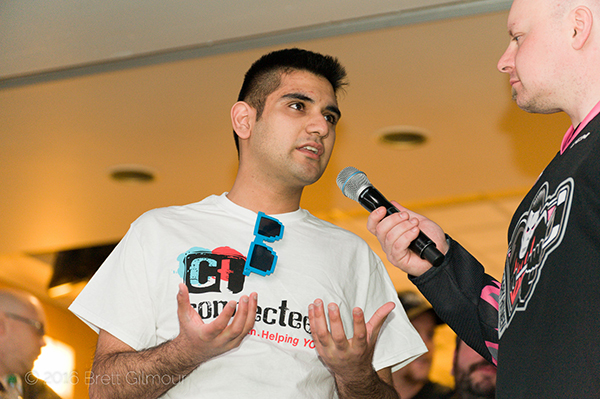 A connecTeen volunteer speaking at the 2016 Calgary Hitmen game.

In 2010 Kelly Kisio, GM of the Calgary Hitmen Hockey Club, hosted a one-hour event, highlighting the work of Distress Centre. He requested patrons take an hour out of their day to learn what 1 hour at Distress Centre was like. This was the start of 10 years of support, with more than $200,000 going to ConnecTeen, thanks to a partnership between Dsitress Centre, the Calgary Hitmen, EllisDon and Pattison Outdoor.

Outrun The Stigma, a fun run/walk originated by the DC on Campus and U of C Mental Health Awareness clubs in 2013, has raised more than $190,000. The goal is “to end the stigmatization of mental health disorders in the community through fundraising, community engagement, and by providing an environment for mental health resource distribution.”

Leah Shipton and Amy Li (who volunteered at DC) launched the initiative:

Amy: “When we started back in 2013 none of us had hosted runs before. The first year we had over 200 people and spent the entire summer planning. Since then each run has started with a speaker from the community talking about their mental health experiences followed by the run, which is 5 or 10 km, and sometimes a 3k walk. Distress Centre has a booth so the runners and their families who come are able to learn more about the resources that are available. In 2015 we became an official non profit, and expanded our chapter to Edmonton. 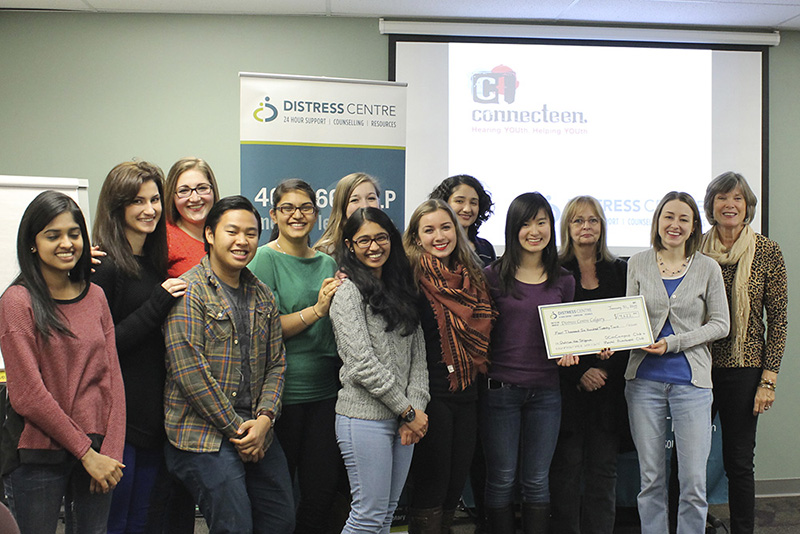 The check presentation for the first Outrun the Stigma. The event took place in 2013 and the presentation in early 2014.

“We had no idea what we wanted to call it. Kevin from the marketing team came to a meeting one time and suggested Outrun the Stigma which everyone fell in love with.

“The event always makes me think how much youth can do in terms of advocating for the things they believe in and getting the community together. We don’t necessarily have the money or the connections, but we have the energy and the passion and dedication.”

''The event always makes me think how much youth can do in terms of advocating for the things they believe in and getting the community together. We don’t necessarily have the money or the connections, but we have the energy and the passion and dedication.'' - Amy Li

Leah: “DC usually has a really large presence at the event and a team of volunteers who come to support us.”

2014 was the first of a number of times the DC was selected as one of the recipients of the Calgary Herald Christmas Fund. The Shaw Charity Classic in the summer similarly partners with a number of Calgary charities including Distress Centre to provide much needed public awareness and funding to our ConnecTeen program. 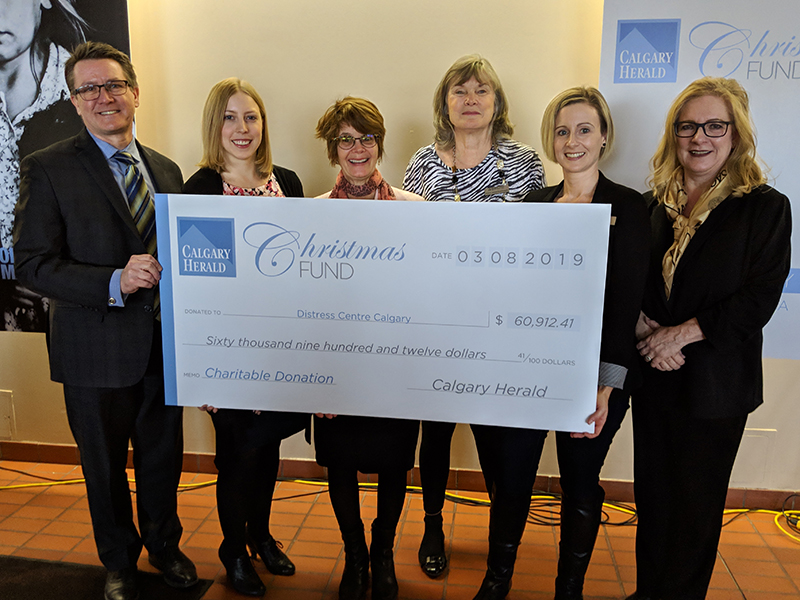 The check presentation in 2019 for the Calgary Herald Christmas Fund.

May 2015 was the first Darkness Into Light event. It originated in Dublin and has expanded worldwide with over 110,000 people across 4 continents participating. The Calgary event was started by Sharon Welton, and has raised more than $35,000 in honour of people close to her who had died by suicide: “Beginning the event in the darkness and walking or running as the sun rises symbolizes that there’s hope in the future.”

Individuals partner with the Distress Centre in many ways. 2014 brought forward Rich and Lauren Paxton, survivors of a loss to suicide, who began a Listen Up event at Dickens Pub. With a great line-up of music and a silent auction, the event continues to raise funds. Lee and Neil Horbachewski and their family have been supporters of Distress Centre since 2008. In October 2004, Lee was moments away from taking her own life. She made a call to the crisis line that she says saved her life. 16 years later, Neil is a crisis line volunteer and Lee continues to advocate as a voice of hope and inspiration for people impacted by mental illness.

Neil speaks to their involvement: 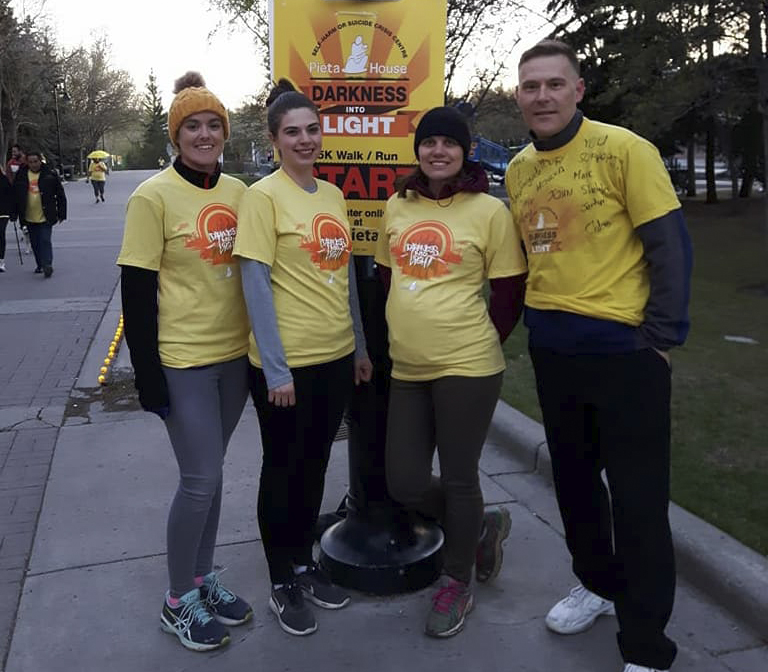 “Lee tells her story to support the DC, when they are raising awareness or funds. She wrote a book about her suicide attempt and postpartum depression, and how she has come around and is now living a wonderful life. We provide some financial support then, and now I can give my time, which I think is of equal value to providing dollars.

“I have had crisis calls where I have used my experience and Lee’s situation to connect with a caller to build rapport. People say really, that happened to you, and I can say this is how we got through it. Not everyone has family, community or work support. I am hoping we are paying it forward.”

A client-serving partnership began in 2016, between the Calgary Immigrant Women’s Association and Distress Centre. The DC provides a work placement opportunity for internationally educated professionals. They mentor participants and provide them with an evaluation and a letter of reference at the end of the placement period. Collaboration is a core value of both Distress Centre and CIWA; an example of social agencies working together to accomplish amazing things.

A similar client serving partnership was formed in 2017 with carya, whose focus is seniors. Director Lisa Stebbins comments:

“When the 211 operator has determined that our The Way In program is the correct program for the person, they will process the intake. If they can’t determine what services would be the best for the senior’s situation, then they would refer them to our outreach worker for a more in-depth assessment. If the person was in immediate crisis and needed support, they would transfer them to the crisis line. We in turn have accessed the Basic Needs Fund for our clients and also work with SORCe downtown as needed.” 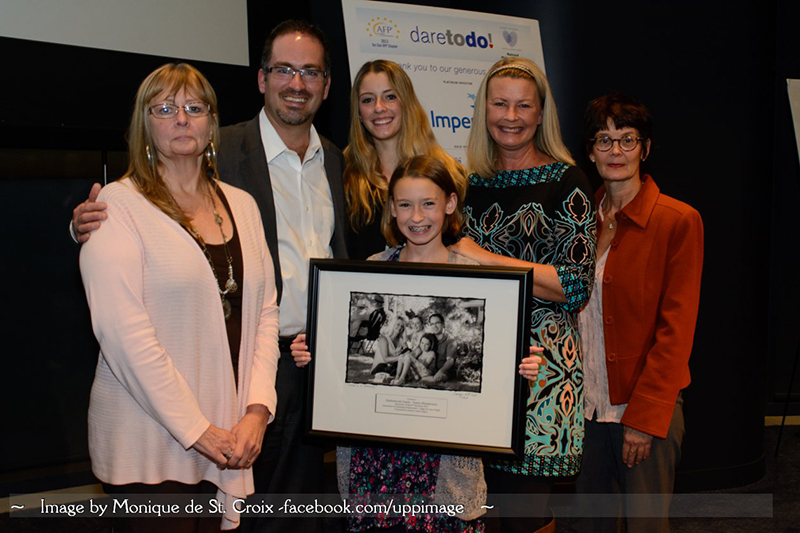 The Horbachewski Family with DC staff after winning the 2014 Generosity of Spirit Award for Philanthropic Family. Photo by Monique de St. Croix

“Like many agencies in the city, our voice mail will say sorry, we can’t talk right now but if you are in crisis call Distress Centre. Distress Centre is one those pieces of the social infrastructure of the city that is like a well-loved piece of furniture, it feels like home so you don’t always see it, but if it disappeared, the impact would be pretty significant.”

''Distress Centre is one those pieces of the social infrastructure of the city that is like a well-loved piece of furniture, it feels like home so you don’t always see it, but if it disappeared, the impact would be pretty significant.'' - Paul Bartel