Darkness Into Light, originated in Dublin, Ireland eight years ago with just a few hundred participants. It has expanded worldwide with over 110,000 people walking/running across Ireland and in four continents, all in support of Pieta House, suicide and self-harm crisis centres throughout Ireland. The first Calgary event took place in 2015 and was organized by Ireland native, Sharon Whelton. She chose Distress Centre as their local charity of choice to encourage Calgarians to get involved and show support for a local charity.

Participants gather at the early hour of 5am and walk as the sun rises, so that when they finish, day has broken. The concept symbolizes that there is hope for the future and the event aims to encourage anyone struggling withe mental health issues to seek support. The 2016 walk/run took place on May 7th and raised $2752 for Distress Centre! 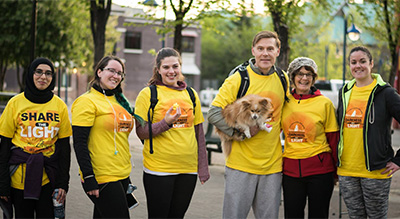