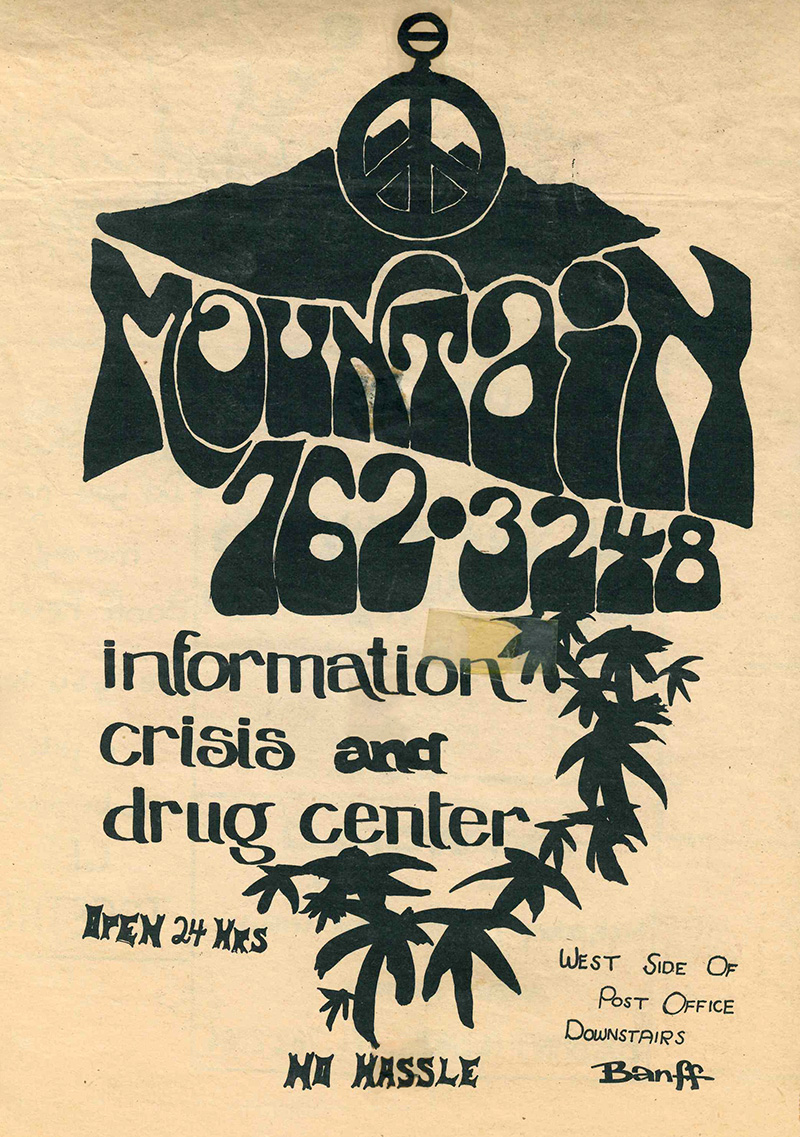 While smoking dope and ‘finding themselves,’ Canadian youth were crossing the country in large numbers during the late 1960s and early 70s. It was a lifestyle most cities and towns were unprepared to deal with. Social supports were slowly being put into place, but never without controversy.

To enable a large-scale professional discussion of this problem, $8,000 of the initial $20,000 received by Calgary’s Drug Information Centre was earmarked for a Youth Drug Conference in Banff from April 16 to 18, 1970. It was sponsored by the Drug Advisory Council and backed by the Federal Department of Health. Participants were social workers, court workers, psychologists, school personnel, and interested others.

The headline from a Herald Banff Bureau newspaper article published in 1970.

Sixteen resource leaders provided information, including a panel with Don Bruce, Ken Low, and Doug Feltham from the Drug Information Centre. Topics included pharmacology, legal issues, and ideas for the provision of clinical supports. A variety of views were represented. Emil Roessingh remembers: “There was one guy who advocated the use of drugs, said you should try it, it’s good for you, it will develop your mind. I was supposed to be the neutral voice of reason when I spoke.”

Much of the content centered around the early findings of the Le Dain Commission, whose members had visited the Drug Information Centre for input. The report provided a hierarchy of drugs based on their potential for causing psychological, social and physical danger, and noted that any successful program must involve the whole community.

Like the Drug Information Centre itself, the report stated that simply telling a user to quit:

“…merely gives him an unsuitable alternative, since the use of drugs can be a manifestation of a deeper personal problem. Therefore, only by attacking the problems basic to drug use, and by assisting him in realizing alternate solutions, are you giving him the freedom of choice.” 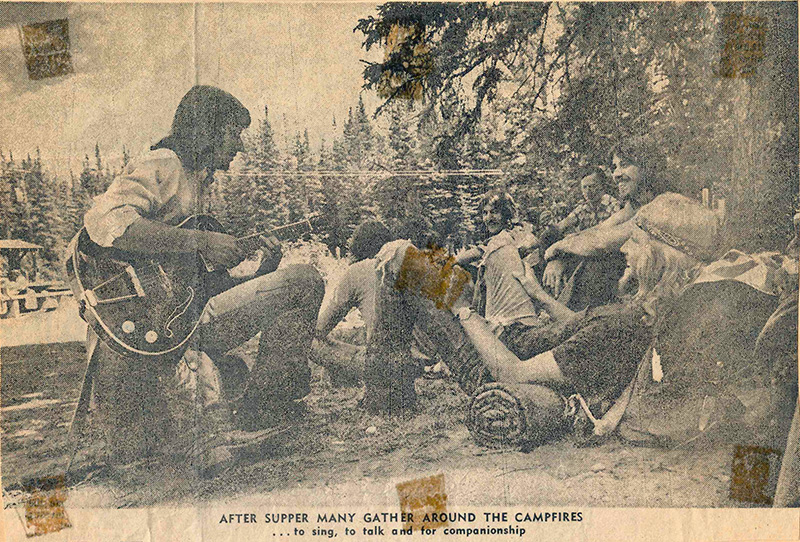 An image of youth hanging out in Echo Beach, which appeared in a newspaper in 1970 or 71.

The conference was deemed a success, partly because it came in under budget at $7,300. It was followed up by the first and only foray of the Drug Information Centre out of Calgary, into Banff. Ken Low notes: “The Banff merchants were not thrilled, in much the same way that elements of any community were very much against the efforts we were making.”

A 24 hour Banff Drug Centre, operated by Calgary’s Drug Information Centre volunteers and staff, ran from June 19 to September 15, 1970, out of St George’s Anglican Church. Services included answering calls, attending to drop-ins, providing public lectures, administering Valium, and assuming responsibility for ‘feed-ins’. At the time, there were no social workers, psychiatrists or branches of social services in Banff, just RCMP dealing with problems after the fact.  During that summer, staff recorded 132 calls, 266 drop-ins, and 20 of 53 crisis cases needing Valium.

The Calgary Drug Information Centre returned to Banff again in the summer of 1971, funded by an $8,000 four-month federal Opportunities for Youth (OFY) grant. Six staff and 30 volunteers operated out of the Banff Post Office Building from 10 am to 2 am. They provided information services for youth encountering financial, legal or medical difficulties, primarily those tangled up in drug problems.  That June, the Calgary Herald quoted the Director as saying “Banff’s social services are a very flimsy thing at the moment. We hope to fill in the gaps we see here.” 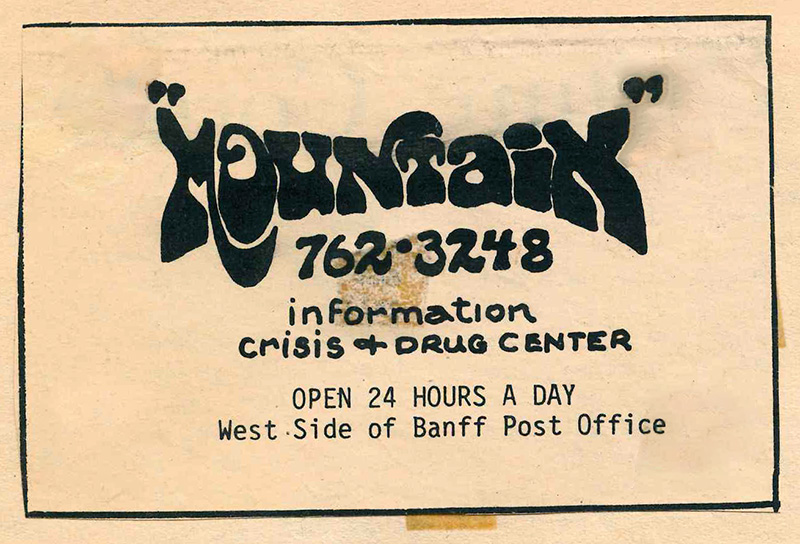 An ad for the centre that appeared in a 1971 newspaper.

The local SCREE newspaper noted that the lonely and lost were the main visitors to the Centre, including an 86-year-old man looking for a marriage license. The Centre’s actual purpose was to deal with drug, medical and emotional crises as well as to discover whether or not Banff social services needed to be expanded. It was not to be a crash pad or drop-in centre and extensive speaking and public awareness in the community were part of the mandate.

A Mountain Information Crisis and Drug Centre Committee of local citizens oversaw the OFY grant and acted on behalf of the townspeople.  As the Banff Cragg and Canyon paper noted, “most people were not only resentful of these travellers’ presence here, but also failed to see why a town of 3,500 should be expected to look after the wants of some 25,000 young people who would be here this summer in the course of bumming their way across the country.”

Although this Committee and the Mountain Drug Centre had no official connection to the Echo Creek Campground where most young people hung out, Centre staff aided parents in their search for runaways by accompanying them through Echo Creek. When RCMP attempted to help, they were met with suspicion and no cooperation. Two staff slept at the Creek and spend most of their free time there. The Calgary Herald noted: “A common cry among local residents is that the camp is a haven for filthy, obnoxious drug-crazed hippies. These hippies are blamed for creating traffic hazards on the roads, driving tourists away, the current rash of shoplifting, corrupting the young residents of Banff and generally being a nuisance.”

RCMP, on the other hand, had few objections.  An officer reported to the Calgary Herald: “By staying out at Echo Creek they are separated from people who might normally complain…Echo Creek is probably the best thing that could have been devised for transient youth.” Two feed-ins supervised by Centre volunteers were held each day, with money coming from donations, camping fees (25 cents a night), and provincial welfare administered by RCMP.  Marijuana, hash and LSD were reported as being used, but not blatantly, and ‘needle freaks’ were uncommon and unwelcome.

The Drug Information Centre did not return again to Banff, or to any other physical location outside of Calgary. More than 40 years later, Distress Centre has one off-site location in Calgary, SORCe. It is a downtown, walk-in-based resource centre providing supports to people experiencing or at risk of homelessness.  It’s not Echo Creek, but in 2020, people still need shelter, food, and a listening ear.