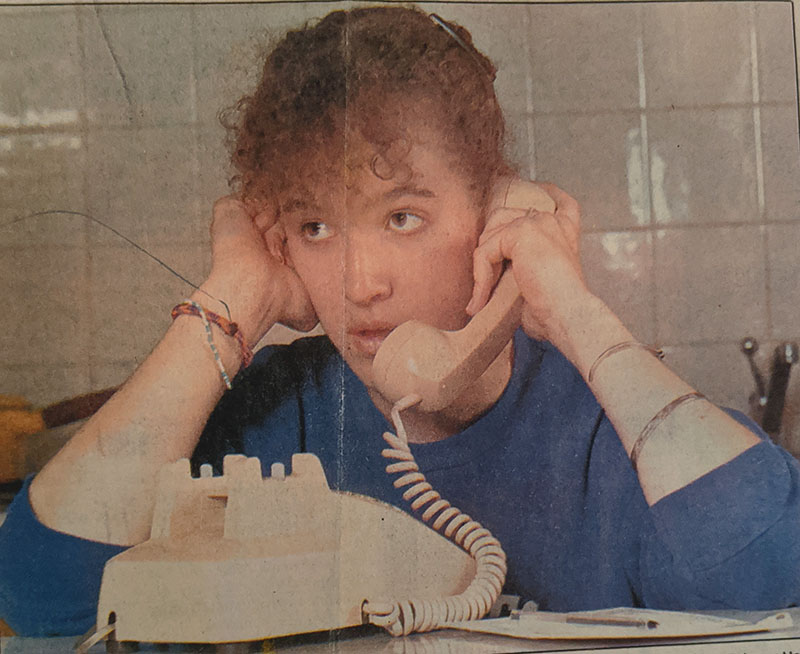 In the early 70’s, most Drug Information Centre callers were adolescent. By the early 80’s, the Distress Centre/Drug Centre “found that teenage service users had all but faded out of the picture…it was back to the drawing board to figure out how to make the connection with kids again” (Katie Black, presentation, 1987). The Board and Jeanette McEachern were determined to bring youth and their concerns back to the call line. With much excitement, a new Teen Line, answered by teen volunteers, opened June 1, 1983. Funded by a $61,000 Canada Manpower grant, it was the first of its kind in the country, serving callers aged 12-19.

The logo, Just Between Teens, was meant to tell teens that the line would provide free, confidential peer to peer communication and support, something that was not otherwise available. Donated posters, brochures and bookmarks describing the Teen Line services were distributed throughout the city with help from a $5000 grant from Shell, solicited by a teen. The first Teen Line newsletter noted that “The Grape Room” had undergone a massive transformation for the better in order to house this new project, including a new dedicated phone number.

Katie, then Teen Line Co-ordinator, told a reporter: “The volunteers are not tape recordings and they don’t pretend to be psychiatrists. All that is expected is for the volunteers to be themselves. When they go on the line, all they do is listen as a teenager.” Jeanette added “It’s deliberately not called a crisis line because we don’t feel teens have to be in a crisis before they can call. It is more of a talk line.”

''All that is expected is for the volunteers to be themselves. When they go on the line, all they do is listen as a teenager.'' - Katie Black

“We did a lot of role playing that involved sitting back-to-back so that you were listening to someone without being able to see them. We held our teen volunteers to the same high standard that all the others had. The teen line volunteer filled out the contact card. The Teen line coordinator and I shared an office. It was primarily her job to take a look at the cards from the night before and review them. Certainly, if there was anything in the cards that was a source of concern or something that we wanted to follow up on, we would reach out to the clinical supervisor, or to other crisis counsellors. We supported each other very effectively that way.”

“Some have had problems in their own lives, received help and now want to lend a hand. Some just need to help, and others are interested in going in to social work and want to get experience and see if the field is for them. They are a special kind of people because they are warm and caring.”

A directory of local services available to young people was created to assist callers wanting information on anything from birth control, legal aid, emergency medical aid or shelter, to drugs. As a volunteer noted in a newsletter: “even if you don’t understand the caller’s problem, be willing to understand. It’s the wanting to do it.”

In the first 6 months, 30 public education presentations included as topics: Youth and Drugs, Suicide in Youth, Communication Between Parents and Youth, Teen to Teen and Teens to Authority. Callers and their families had access to immediate counselling.

A 1985 volunteer told the Calgary Herald:

“We stay away from offering specific advice. Our job is to listen, encourage the callers to talk about their problems, and then try to steer them into the right direction where help is available. Every problem is serious to a caller and we try to treat it in the same way.”

Neutrality was not always easy. The Calgary Sun reported on a 20-year old volunteer saying: “You sometimes want to stand up and tell the kids they are ruining their lives. But they probably get enough of that from their parents.”

''You sometimes want to stand up and tell the kids they are ruining their lives. But they probably get enough of that from their parents.'' - Teen Line Volunteer 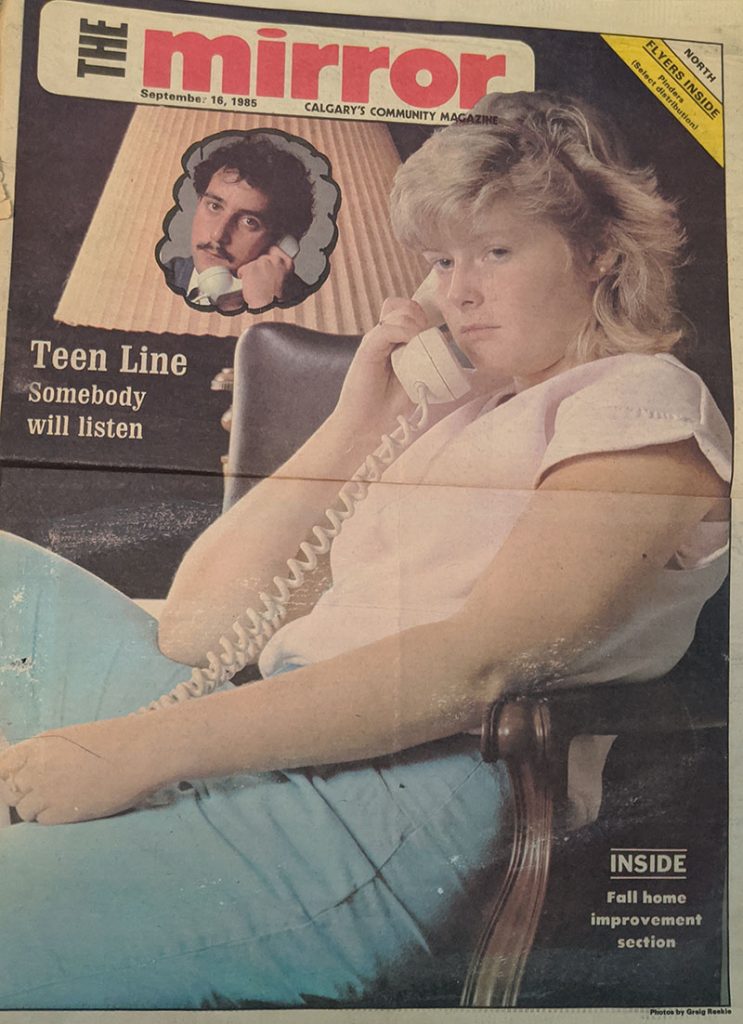 The cover of the Mirror newspaper in 1985.

Former volunteer and current psychologist Jennifer Raymond has fond memories of her time as a volunteer:

“My time on the Teen Line was amazing and life changing. I was friends with about 8 others, and for two or three years we must have spent every single weekend together. I was really excited to get a call, we did a four-hour shift and a big shift would be 3 or 4 calls. It increased very much over the period of time I was there.

A paper wrote up Teen Line, and we were all very insulted, because it was meant to be nice, but it said we were all fresh-faced and looked like we had just fallen off the turnip truck. We were all incensed. Even though it was probably very true, it was mortifying.”

As with the adult programs, funding was often an issue. United Way, South Rotary and the Burns Memorial Fund all contributed until 1987, when United Way accepted the program permanently. Another issue arose when Pro-lifers started calling Teen Line about abortions to see what kind of response they got, and the Catholic School Board removed its support based on allegations that abortion counselling was being provided. By August of 1987, both public school boards were happy promoting the line.

The Mount Royal College paper reported that up to 25% of calls were of a crisis nature. In 1987 sex was the most popular subject, but three to five percent of calls involved physical or sexual abuse or suicide. Marlene told The Mirror:

Use of the line grew year after year. Teen Line received 4,648 calls in 1988, 60% during the times teen volunteers answered the phones. Most callers were 15-19, with the two largest call categories being relationships and referral requests. 337 hours of counselling arose from the calls.

The volunteer experience was still taxing. As Lynn told the Mirror in 1989: 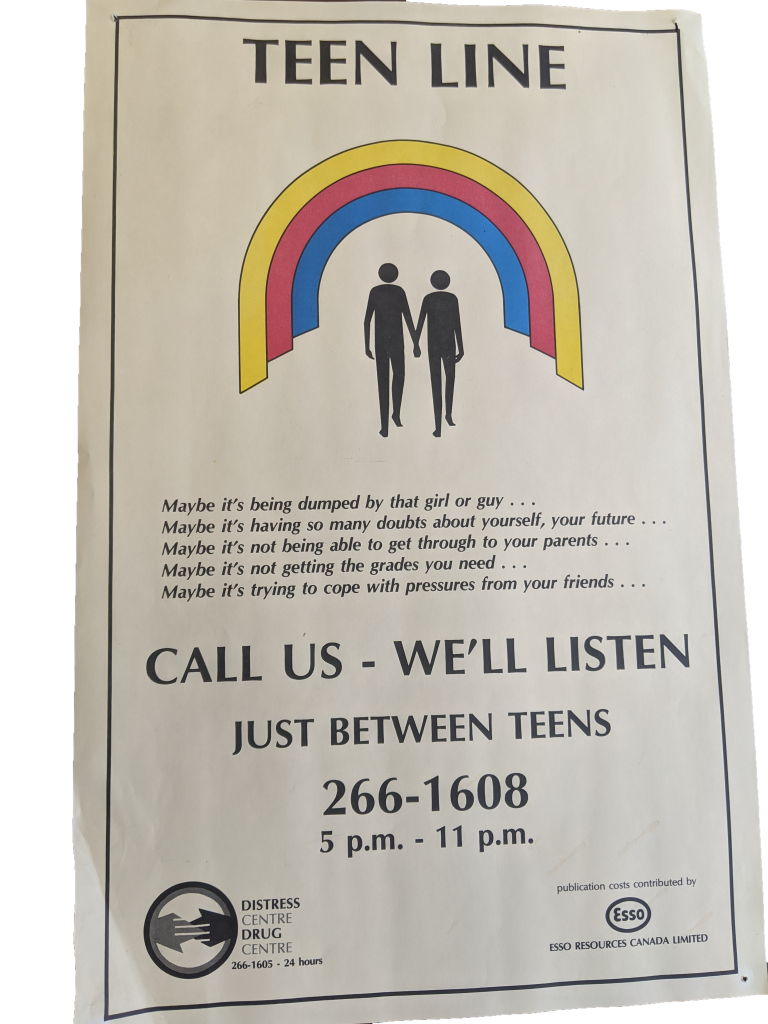 A ConnecTeen poster from the 80s.

“I talked to one 16-year old who was abusing drugs, and I related to him totally. I asked him what was most important to him and he said his friends. I asked him what came second, and he said his drugs. That was me not long ago, so I think we connected. I lived for drugs and the weekends. And the funny thing was, it wasn’t until two years after I quit that I knew I had a problem. I didn’t know about Teen Line. But then, I probably wouldn’t have phoned if I did. We don’t get a lot of calls from the real hard abusers, because like me, they don’t think they have a problem with drugs when they are on them.”

“I was exposed to many things from which I had previously been sheltered. I realized that child abuse and sexual assault really do happen. Frequently. Right here in my city…Being able to help others does not make a volunteer superhuman, nor immune to their own personal problems. It doesn’t mean that we are perfect people who have never experienced pain or nor have made mistakes. It does mean we see value in helping where we can, and that we are willing to take the time to talk to other people.”

''Being able to help others does not make a volunteer superhuman, nor immune to their own personal problems. It doesn’t mean that we are perfect people who have never experienced pain or nor have made mistakes. It does mean we see value in helping where we can, and that we are willing to take the time to talk to other people.'' - Michelle Worobec

It was a highly successful start to a program that has since evolved into the current ConnecTeen service. Stay tuned for parts 2 and 3 of this story!