In January of 1994, AADAC added a province-wide Gambling Line to their services. The government had put newly available VLTs in all the bars and casinos and people were getting hooked on them, something which is still true today.

“AADAC was giving funding for problem gambling. When AADAC trained all the staff, I was not even on full time, but I asked if I could attend the training on my days off and they let me, because I was so interested. I had gamblers in my family, and I was fascinated by it. It was my passion for my career.”

The line was transferred to Distress Centre in June 1994, funded and supervised by AADAC. Getting the line was a competitive process, and Distress Centre was very pleased to be selected. The line handled 120 calls a month on the 1-800 number, with VLT addicts comprising almost 60% of callers, followed by concerns about lotteries and bingo. Gaylene remembers: 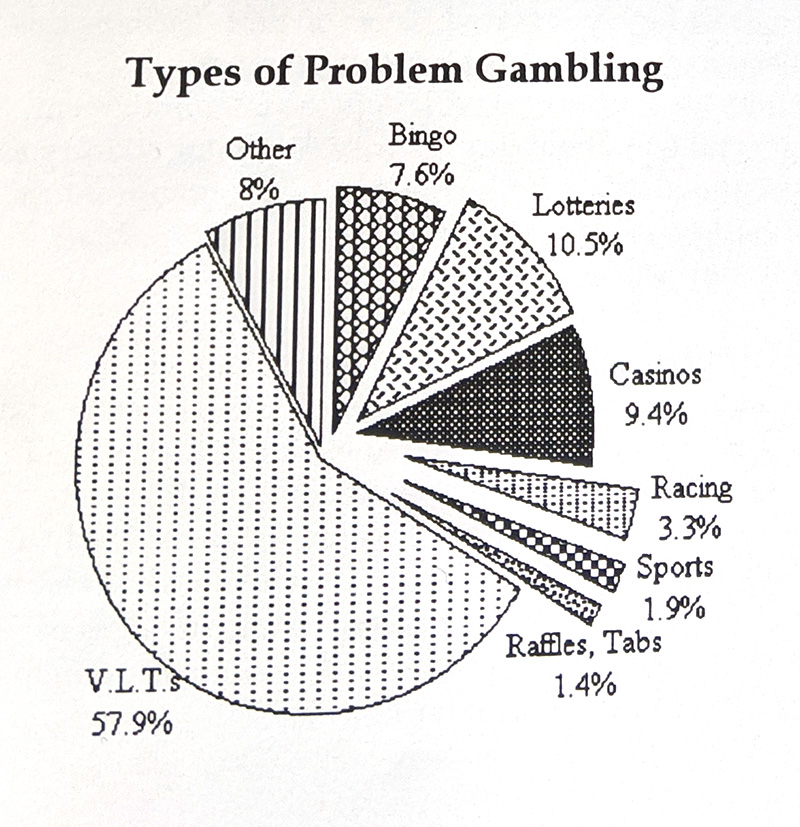 “AADAC put posters in all the casinos in Alberta with the help line number. I did the counselling for those who wanted it. They were also referred to AADAC, because I couldn’t do it all. We got fantastic training. Calls were pretty 50-50 male and female, and the women tended to be older, a lot of seniors. Seniors were the most high-risk population. It’s a loneliness factor, especially for women. For men it is more of a rush. Our clients were mostly 35 and up, gambling to fill voids in their life.

Everybody was cross-trained, they answered any line that came in but the lines all rang separately. I did one night of gambling training for all volunteers. They really had to know what they were doing with the high-risk calls. The most difficult part was having seniors come in for counselling who had spent their whole retirement savings on gambling.”

1995 statistics report 200 calls a month. A major problem was another 100+ callers simply looking for winning numbers, because the help line was the first phone number on tickets until late 1996. 74% of calls were from clients themselves, the rest from concerned third parties. Gaylene reflects on the nature of the calls:

“The crisis calls were actually worse on the gambling line. Gamblers had the highest suicide rate of any addiction. People called us when they had blown a pile of money and they were scared to tell their spouse or family. Big financial problems were usually the trigger. A lot were talking suicide, and a lot had actually attempted prior to calling. It was pretty intense. They had the same sort of traumas that people with other addictions have, like background issues. The indigenous population was high risk, as was the Asian population.”

''The crisis calls were actually worse on the gambling line. Gamblers had the highest suicide rate of any addiction. People called us when they had blown a pile of money and they were scared to tell their spouse or family. It was pretty intense.'' - Gaylene Heidt

Distress Centre mailed out an information package, Playing for Keeps, but only to the caller, not to someone else’s address as was often requested by friends or family. Presentations to groups was part of the service: residents in Riverside Villa Recovery Centre, Alpha House, and later 1835 House funded by AADAC; staff in other agencies; and high school Career and Life Management (CALM) classes. Group counselling was done by Gaylene:

“I did a long-term group for gamblers who had finished their treatment. That went on for two years. The same clients came, and really started working on their issues, the traumas in their lives. They seemed to stay longer than in the drug and alcohol groups, they were pretty committed. Gamblers were more alert because usually there was no other substance abuse. They worked really hard in treatment, and were really eager to get help, urgently.”

By 1999, coordination of the line moved to Peggy Voth. The 1-800, line received 3708 calls that year. 75% were clients, with concerned family and friends another 23% and professionals seeking information the balance. Two former gamblers were part of the presentations. As Peggy recalls: 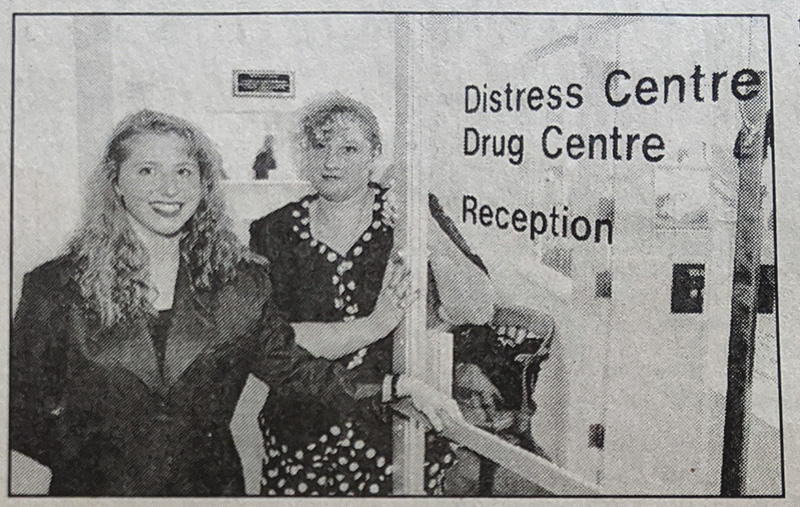 A photo from the Calgary Herald in the early ’90s.

“There was one man who just lost everything to gambling and a cocaine addiction. The cocaine addiction had gone on long enough that it had shut down the pleasure centre in his brain. When I would go out and do education around gambling, he would tell his story. He was funny and warm, and he really caught people’s attention. He came to me after he had attempted suicide. So, suicide, cocaine and gambling. There was something about him being able to tell his story and educate other people that gave him a feeling of accomplishment and purpose. He said I don’t know if the pleasure centre in my brain will ever recover, but I do feel like I am doing some good here.”

“I saw only gambling clients, trained the volunteers and did a lot of partnering with AADAC. I was out of the office more than I had been before. I visited casinos, but AADAC was doing their own training. We were trying to bring casinos onboard, to show them the benefit of supporting us. I did not do any gambling groups, they no longer occurred.

Desperate people called. Men and women, and they were very lonely, very poor, its like they had no social network. VLTs were the biggest issue. People who were financially and psychologically at the end of their rope. I would say they were relatively committed to making change by the time they called. The gambling clients I saw for counselling came regularly. We were limited to 6 sessions, as was all counselling at the time.”

''Desperate people called. Men and women, and they were very lonely, very poor, its like they had no social network. VLTs were the biggest issue. People who were financially and psychologically at the end of their rope.'' - Peggy Voth

Distress Centre was one of the many charities who fundraised through volunteering at casinos. Gaylene noted the proverbial ethical problem when running a non-profit: “We talked about the issue of using casinos for funding, while we also had a gambling line, but they needed the money so we continued.” Or, as former staff member Suzanne Roseburgh comments: “I rarely buy lottery tickets, but sometimes I do, in spite of all the stuff I know about it. I always say if I ever won a big whack of money like that, DC would have an endowment.”