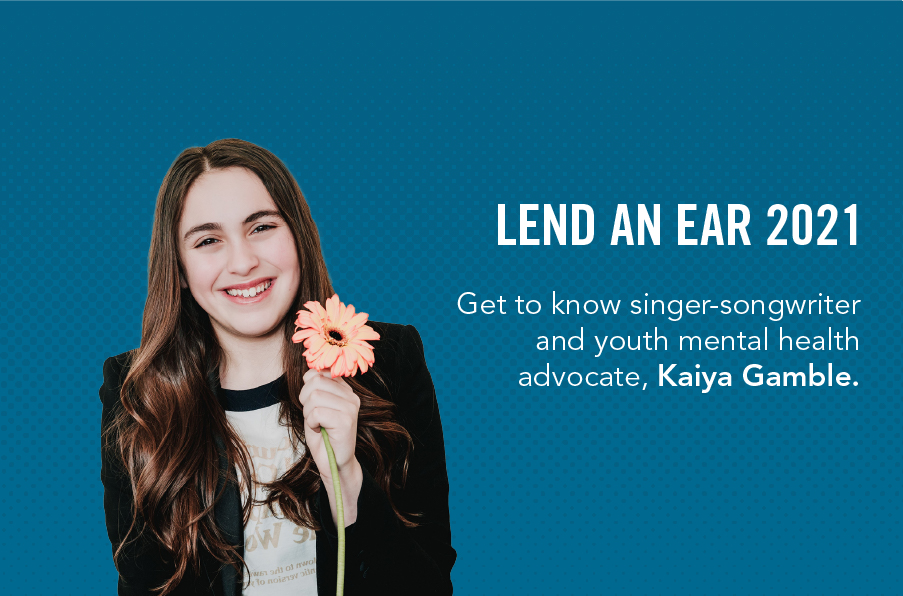 Get to know Kaiya Gamble! Local singer-songwriter speaks and performs at Lend An Ear 2021

Kaiya Gamble first started singing after her school music teacher approached her parents and told them that she has perfect pitch. Her parents put Kaiya in piano and voice lessons and she loved it. After about a year of lessons, she found her current vocal coach, who has worked with artists such as Sarah McLachlan, Lindsay Ell and Paul Brandt.

She has been nominated for two YYC Music Awards: Pop Recording of the Year and The Prophets of Music Emerging Artist Award. In December 2020, she released her debut single “Speak Out,” which this year met with international acclaim when her song finished in the top 3 in the International Women’s Freedom Song contest.

And she’s done this all at only 14 years old.

Kaiya is performing two songs at Distress Centre’s virtual Lend An Ear event on September 23rd, as well as having a conversation with our emcee, Lauren Pullen, Global Calgary Reporter.

Kaiya says she wanted to become involved with Lend An Ear because both her parents are frontline workers. Kaiya’s mom is an ER doctor and her dad has worked as a STARS Air Ambulance pilot.

“The volunteers and staff at Distress Centre help so many people when they feel helpless, just like my parents help people in their jobs,” Kaiya said. “When I have a chance to help the best way I know how – through music – I know I want to be a part of it.”

“Some have it worse than others, but either way, it’s those painful experiences that I believe no one should have to go through alone. Any chance I get to advocate for mental health, I take it.”

Watch a video message from Kaiya!

A passion for music

Kaiya says she loves music so much because it’s a universal language: “It’s a way for all of us to connect and say things we wouldn’t otherwise say with the spoken word. It helps us reconnect with our emotions which is so healing in my mind.”

The singer-songwriter initially got into song writing when her step-grandmother was diagnosed with ovarian cancer when Kaiya was nine.

“I had no idea how to tell her how much she meant to me, so, I wrote a song. Turns out that melody, put to words, was more meaningful to her than anything I could’ve given her. That showed me how much my writing could impact people, and I fell in love with music all over again, but in a whole other way.”

Learn more about Kaiya and see her perform at Lend An Ear on September 23rd!

Listen to Kaiya’s single and follow her on social media.