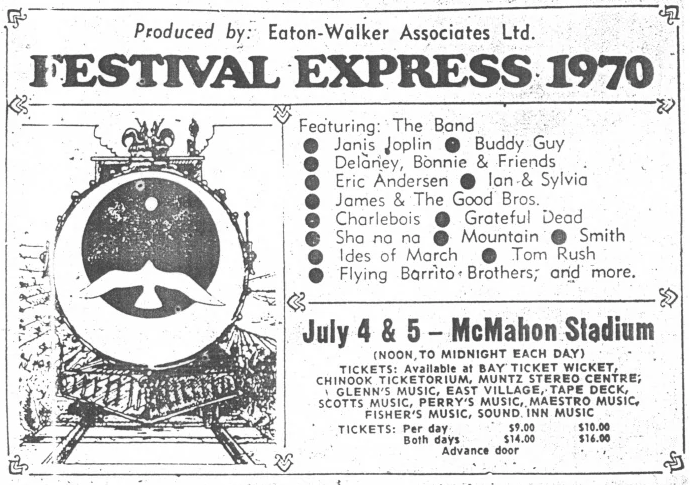 Although it was the general concern for youth encountering the drug culture that prompted the original Drug Advisory committee members to come together, there was a much more pressing issue for the larger Calgary community. Sex, drugs and rock and roll would be infecting McMahon Stadium on July 4 and 5th of 1970, by way of the Festival Express music train moving across the country.

The Band, Janis Joplin, Delaney and Bonnie and Friends, the Buddy Guy Blues Band, Ian and Sylvia, Great Speckled Bird, Grateful Dead, Sha Na Na and 13 others would be starring in a two-day rock concert. 50-100,000 people were expected to attend, and there was great fear it would be another Woodstock. Something needed to be done to save youth from themselves!

The Drug Advisory submitted a proposal to the concert promoters to co-ordinate medical and para-med services, which was accepted. Medication and respite were available at Tranquility Base, just off-site. 25 Drug Information Centre (DIC) volunteers, 10 DIC staff, 3 physicians, and 1 volunteer at each hospital emergency were part of the plan, along with six vehicles on standby.

“My volunteer group had prepared for it, and I helped set up the planning. I was on the field and in the room. I loved Festival Express. Some of my favorite music was there and it was great. It was a zoo, but we had relatively few problems. I loved seeing Janis Joplin. There was lots of smoking going on, but it was not as bad as some people wanted to make out, and it was amazingly peaceful.”

“As I am arriving in the morning to get things set up, a number of policemen were deliberating whether to arrest people for illegal possession. They decided they would not. They would just observe, and take pictures from the stands. After Woodstock, they were scared, and didn’t know what to expect.  Police were loading their hunting rifles and leaving them in their trunks. In the end, there were very few security problems.

''After Woodstock, they were scared, and didn’t know what to expect. Police were loading their hunting rifles and leaving them in their trunks. In the end, there were very few security problems.'' - Ken Low

“As a result of the police not arresting folks, there was an inquiry. I had to appear as an expert witness. I agreed to come, and the essence of my testimony was that it would have been much worse if they had tried to arrest people. In order to qualify as an expert witness, I had to acknowledge my past use of drugs, and I had to ask the judge for protection, so that anything I said in my testimony could not used against me in court.

“The head of psychiatry and the head of pediatrics were there. The St John’s ambulance brought in a big burley biker type, lots of tattoos and big muscles. Very much out of control they brought him in, dumped him on the floor and ran out. We did use valium for some patients, because if we didn’t calm them down one person could set them all off.

“As we are trying to figure out how we are going to inject some valium into this person, a physician came in, injected him, and we just sat back and waited. He shook his head a couple of times, looked around, and he hollered out ‘who is the SOB who shot me with whatever that was?’ As we all look around wondering if we should point to the physician, he stepped right up and said it was me. The biker asked him what size needle he used. He got an answer and the biker says, no wonder it worked, I never use anything as big as that!”

Dr. Bryan Tanney, a psychiatric resident who spent one day a week at the Drug Information Centre as part of his training, was a physician on site at Tranquility Base:

“There were two or three of us who were young and ready to go and said we would be there all night and all day. We arrived as medical back-up for all the people taking drugs that were on bad trips. Absolutely nobody in Calgary knew anything about what to do with people who were having bad trips, so it was a learning experience for all of us. Lots of people were wandering around so we had a little room where we would take people in and just quietly help. There were no straight jackets and we didn’t haul anyone off to some sort of psychiatric facility. Mostly, people just got over it and carried on.”

''There were no straight jackets and we didn’t haul anyone off to some sort of psychiatric facility. Mostly, people just got over it and carried on.'' - Dr. Bryan Tanney

Meanwhile back at the DIC, Emil Roessingh was “…trying to keep things under control. It was pretty crazy. Actually, it was nuts, because that facility we had up there was really small. It got overloaded really quick. So, we started sending them to the Drug Centre or to the hospitals if they needed more attention.”

In the end, 20,000 people attended the concert. The major issues were sunburn, sensory overload, and sleep or food deprivation. One hundred and fifty-five cases were treated.  Seventy-seven required first aid and medical attention, and seventy were treated for drug problems. There were a few people who required both. The world did not end, nobody died, and the Drug Information Centre became an integral part of Calgary for the next 50 years.