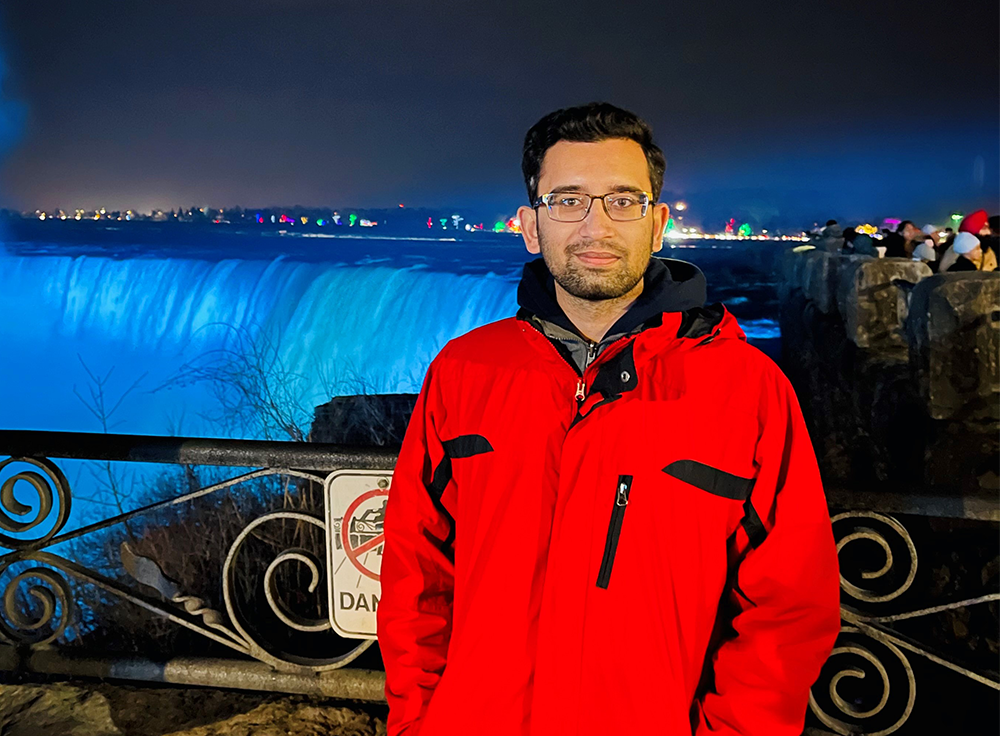 Ahsan has been volunteering with Distress Centre and our ConnecTeen youth program since 2015 but he still remembers the call that changed the way he handles crisis calls.

Ahsan answered a call from someone who told him they were having thoughts of suicide, they had a plan to attempt suicide and they were going to act on that plan later that night.

Ahsan began following the procedure taught to volunteers to handle high-risk calls – calls in which someone is at imminent risk of harming themselves or others – which includes further risk assessment, active listening and developing a safety plan. But where the conversation really took a turn for the better was when the caller* began talking about something they were passionate about: writing. The caller was in the process of writing a novel and when the conversation shifted to that, Ahsan noticed their mood improved as they talked about something they loved.

“Talking to them about their interests and just being a human in that moment for them was something that I remember because it showed me that someone can be in a dark spot but there can be one thing you discover about them – whether it’s an interest, their relationships, their goals in life, whatever that may be – and you can have that conversation and try to move them from that darker place to see that there’s light at the end of the tunnel.”

By the time the call finished, Ahsan had successfully de-escalated the call and the caller said they no longer intended to act on their plan.

Before this conversation, Ahsan said that he would ask a lot of questions, trying to discover a way to solve the problem they were contacting Distress Centre about.

“That call showed me that what I really need to do as a crisis line responder is just be there for them in that moment of time, just so they feel supported and heard,” Ahsan said and added that this is advice he would share with any new volunteer. “I know it’s very tempting to try and solve their problems on the call but most callers have complex issues that can’t be solved in one phone call. So just be there for them in that moment in time when they need somebody to listen.”

Ahsan applied to volunteer with Distress Centre in 2015 after he saw an ad on the C-train. He was in Grade 12 at the time. He was looking for a meaningful opportunity and was interested in a volunteer role where he could talk to other people and help other youth through their issues. He became a ConnecTeen volunteer.

Youth in Calgary can contact ConnecTeen 24/7 by phone, text and chat to talk about any issues they’re dealing with. During youth peer support hours, youth volunteers answer the contacts.

''Volunteering is one of the best experiences of my life.'' - Ahsan

When someone signs up to volunteer at Distress Centre, we ask for a commitment of one year, though many stay on longer. Ahsan, who has been at DC for seven years and is now 24 years old, says that the direct impact he makes on others is one of the main reasons he continues to volunteer long after completing his initial commitment.

“Volunteering is one of the best experiences of my life,” Ahsan said.

Ahsan is a ConnecTeen Leadership volunteer, meaning that he has shifts where he answers phone, chat and text contacts, but he also helps to train and coach new ConnecTeen volunteers. The continuous learning he experiences has also played a major role in Ahsan’s long tenure at Distress Centre, and led him to pursue a minor in psychology in university.

A big thing he’s learned in his time at DC is the importance of self-care.

“Self-care should be a big part of everybody’s life,” Ahsan said. For his own self-care practice, he reaches out to friends and family when something difficult happens in his life. Ahsan also plays in a weekly soccer league. “It helps me decompress and take my stress out on the field and focus only on the game for that 90 minutes or so.”

Thank you for volunteering at Distress Centre, Ahsan!

Help us provide compassionate support to those in crisis by making a donation in support of our volunteers: