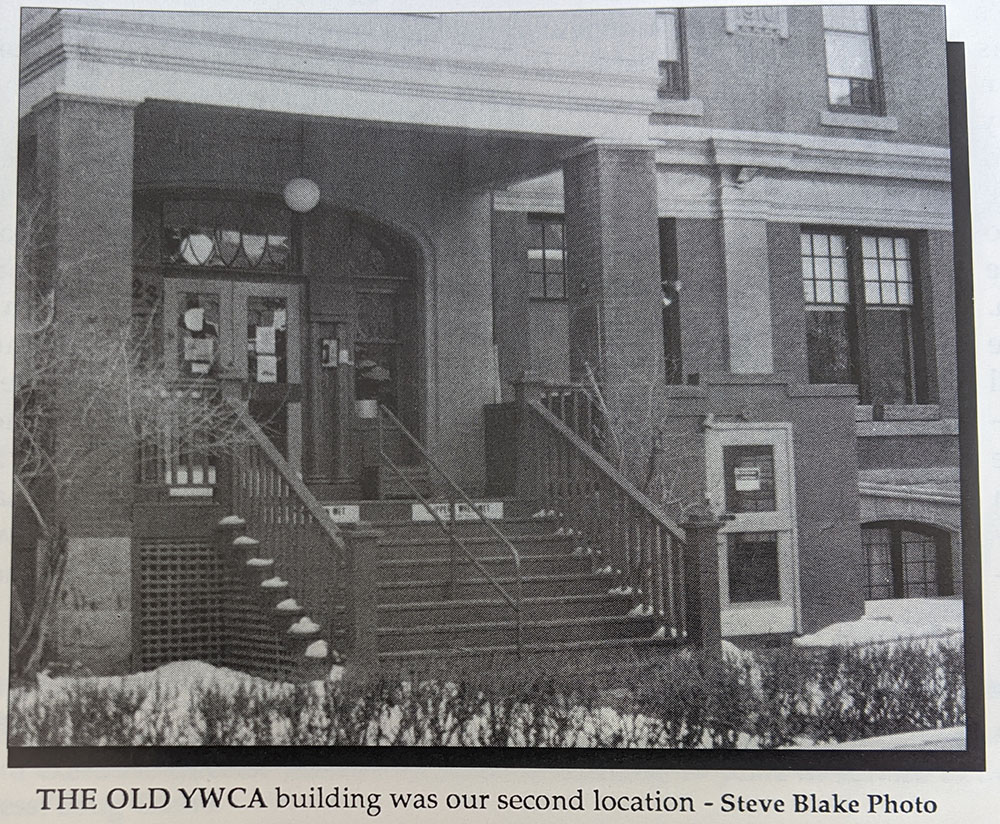 Image: Appeared in our 20 year anniversary publication in 1990.

By 1980, the first location of the Drug Information Centre had turned into Bandito’s Bar. The second location, in the basement of what was known as the Old Y building, was becoming problematic due to limited space and ongoing facility issues. As Katie Black remembers:

“The bathroom was a bit of distance away from the phone room. Back in those days we certainly did not have working alone legislation. I would be doing midnight shifts alone. I can remember stressing about what would happen if the phone rang while I was in the bathroom. I remember sprinting down this little hallway, and sprinting back to make sure I didn’t miss any calls. Those were the things about that funky space that we all operated out of.”

''I would be doing midnight shifts alone. I can remember stressing about what would happen if the phone rang while I was in the bathroom. I remember sprinting down this little hallway, and sprinting back to make sure I didn’t miss any calls. Those were the things about that funky space that we all operated out of.'' - Katie Black

Board Chair Hilde Houlding remarked in 1980 that the Centre was living with the chronic threat of eviction. A joint-agency Old Y Tenant Association submitted an appeal to the City, the building’s owners, to let them lease and manage the building on a cost sharing basis. A five-year lease was signed, and an application to the province to be declared a Heritage Site, subject to the wishes of City Council, was approved. A major reno and face lift was undertaken. By February 1981, the chairman of Old Y committee declared: “We now seem assured of being settled and secure in our desired downtown locations for some time to come.”

However in 1982 Joan Nelson, the Old Y building manager, reported that despite being classified as Historic, the city would not preserve the building on their own. It was in fact condemned, and renovation costs of 2 million dollars or relocation loomed for all the agencies. Four options were discussed by the Board: the city would have to pay the $2 million, pay $1.5 million to at least bring it up to standard, the DC could lease out their premises, or they could stay put until removed by city safety inspectors. 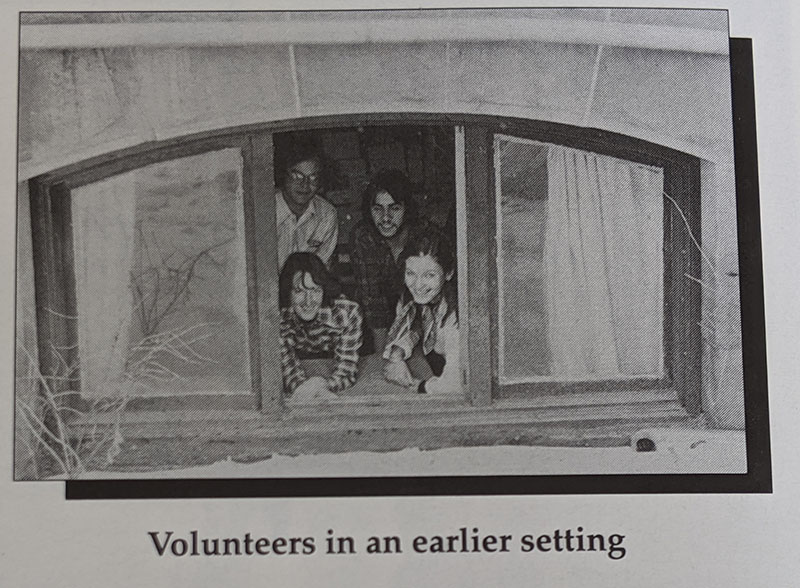 This image appeared in our 20 year anniversary publication in 1990.

A second architectural study was ordered in Jan of 1983 with goal of just making minimal renos, along with a request for reimbursement by the city for maintenance done by DC over the past 4 months. 50% was granted, and by May some renos were underway.

By March 1986, it was clear the building was no longer tenable. 4000 square feet, rather than the current 2500 were needed for expanded operations. Purchasing space was out of the question, and it appeared that even the cheapest lease would be $8000 to $10 000 over budget. A new location was finally found by the Board search committee on 11th Ave S.W, with 4600 square feet and a rent of $27,000 up from $16,000 a year. The Junior League paid $2000 for the crucial phone transfer, Esso donated furniture, and AADAC paid for the move. A casino brought in about $25 000 which was mostly used for other relocation costs and computers.

The Board was not only heavily involved in the search for space, but the move itself. Ernie Hagel was the Board member tasked with the job:

“We needed more space. You didn’t have excess funds but you were trying to move and upgrade, get the most out of the facility and the money. I helped in finding the new facility at 11th Ave. We helped organize the renovation to the space and got all that done. Hands-on. I had a contractor I used and I got him lined up. In those days you only had a couple of weeks to do leasehold improvements, so we did that.”

James McEachern, Jeanette’s son, was the volunteer in charge of technology. He remembers the move: 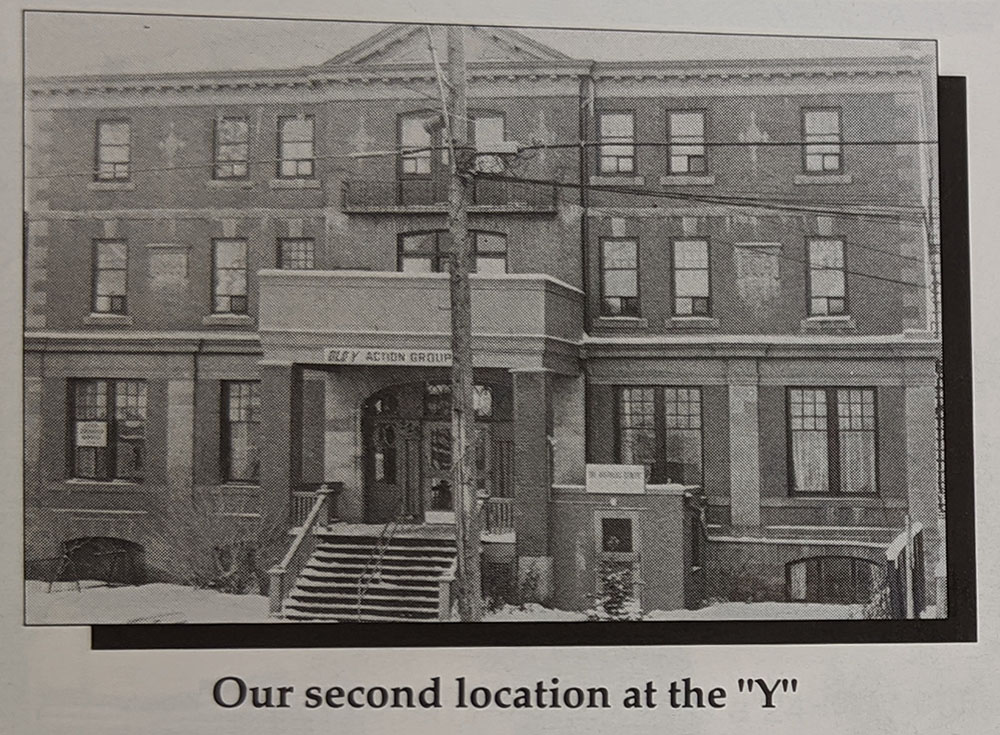 This image appeared in our 20 year anniversary publication in 1990.

“The only really bad thing I remember was working on the network. It was an extremely old building. It was full of 40 years of dust and mouse poop. I would source computers, I crawled through the ceilings installing network cables, I did it all, to get things working so they could do the various pieces they needed. Because my mother was the Director, people were like, why would you pay him? I was happy to help our community.”

The moving truck was there to start the move on June 26, 1986 and absolutely everyone was asked to help. Relocation costs were on target at $45,000 and an Open House was held at the new location November 14 1986, costing $685. By 1989 however, Jeanette was once again advising that they were bursting at the seams.

Despite being small, condemned, and heated by the former swimming pool heaters, many staff and volunteers have fond memories of the old Y. Katie Black reflects:

“When Larry the TA suggested that I volunteer, he said they have the best Christmas parties going. It was still a potluck that happened in the common room of the old Y. We did our work in the basement of the old Y, but we did volunteer training and had parties on the main floor. I was a university student living in residence and I didn’t actually have access to a kitchen. What I remember doing is going to a grocery store and buying the makings of a salad and washing it in the laundry room sink in the residence. It was that or the bathroom at the Y. There were skits, there were songs, and I just have such happy memories of this very, very, grass roots gathering, staff and volunteers. It was just a great celebration.”

''There were skits, there were songs, and I just have such happy memories of this very, very, grass roots gathering, staff and volunteers. It was just a great celebration.'' - Katie Black

On February 4th, 2020 the Distress Centre moved again, but not before another long stop on 8th Avenue SW; a future story with much bigger dollar costs attached.