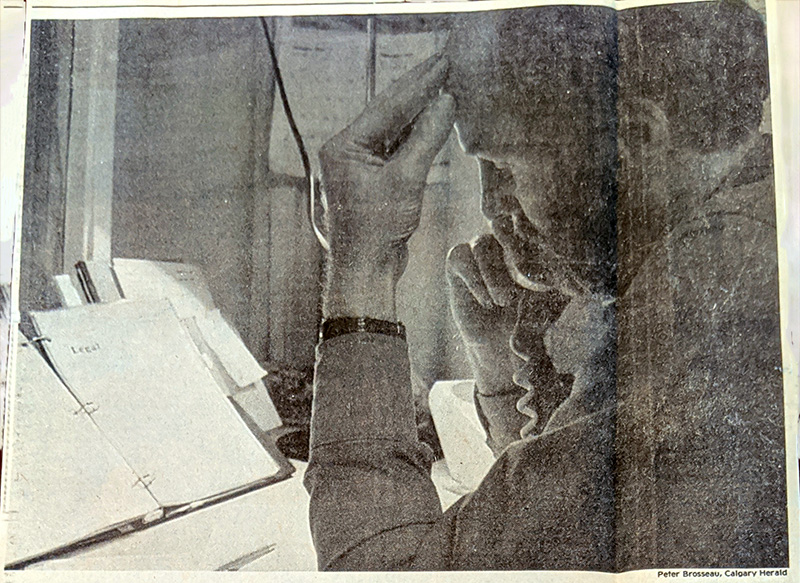 Image: Volunteer in a 1982 newspaper.

During the 80s, The Board of Directors was able to move slowly towards more of a governance-only role. Funding and fundraising were the exceptions; that remained hands-on. As noted in the 1981 Annual Report: “Financial management for the coming year will be a major challenge for Jeanette and the Board.”

Volunteers were asked to join the board based on both their wish to serve the community, and specific areas of expertise. Dr. Quentin Pittman remembers:

“I think there was a desire to have someone from pharmacology there to help inform the Board. It was a hands-on board, there was just no money, everybody would roll up their sleeves and help with something like that. We became less hands-on over time.” 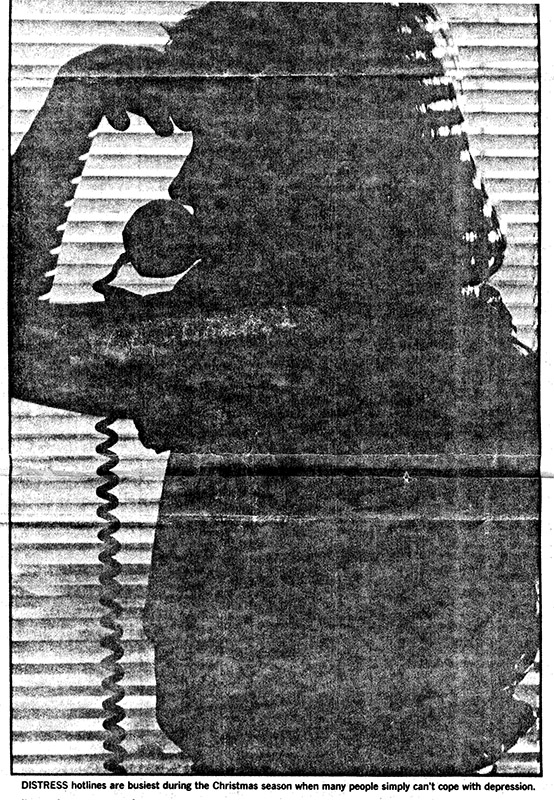 Graphic from a 1980s newspaper.

“…probably there for my legal expertise. In my past I had worked as a drug prosecutor. I remember the range of calls being from extremely minor issues to the top of the criminal pile. We always tried to stay within the parameters of the mission statement. The biggest issue I remember was always the lack of funding.”

“Having a business person on the board is important. You can’t just run by feelings. We were looking at budgets line by line, we were approving if they hired a new staff position. If there were any issues, they came to the Board and we advised. We were not big enough to have committees. You always looked at the number of calls, how many volunteers, how many phones. In those days, the Board Chair signed the checks. Jeanette would say we need these signed today, and I would get down there. The facility upkeep was the big part of the Board’s work in my time. If we needed a door moved, or something fixed, someone on the Board organized that.”

Funding in the early 80s

In 1980, 20% of the budget came from City PSS (Preventive Social Services), who decided which organizations got how much money. Rent increased 15%, taking up a huge part of the budget. Bachelor degree social worker salaries were low at $13,200, making it hard to keep long-term staff. And, a change to the university computing system, responsible for all the data analysis, cost $2600 to purchase new call cards, as the old ones were no longer compatible.

“A big part of the time I was there was helping with the spreadsheets to give to the funders so they could see what was going on. I think earlier than that the funders had trouble dealing with what they thought were a bunch of hippies with big ideas. Now this was a real organization, just like the funders were, whether it was the United Way or the City. This is real stuff, with real things happening, and they had to happen before we got money.”

''I think earlier than that the funders had trouble dealing with what they thought were a bunch of hippies with big ideas. Now this was a real organization.'' - James McEarchern

By March of 1983, the DC was again operating on a temporary budget, and there was concern from multiple social service agencies regarding the distribution of Family and Child Social Services (FCSS, formerly PSS) funds. City of Calgary organizations had received a disproportionate 45% of the money. A donation from the Junior League provided some extra support.

The morality of funding through volunteering at casinos in return for a percentage of profits was balanced against the need for money. At the time, it was possible for an organization to lose money volunteering at a casino, all of which led to much discussion. Eventually, it was decided to apply for permission to volunteer at one in 1983, given the one-year wait list. Suzanne Rosebrugh, staff, recalls:

''We lost volunteers over the use of casinos to fundraise. They felt it was wrong. We had the perspective that people have the right to choose. We don’t tell people not to drink, and the majority of the population is responsible. For those that aren’t, we provide help.'' - Suzanne Rosebrugh

Casinos were the only really unattached funding we had in a not-for-profit. Every other dollar that came in was attached to what it had to be used for. A lot of staff did not understand that you could not mix funding that is designated operational. ED’s got into big trouble if they did that, sometimes publicly.

Casinos continue to be an important part of funding, to this day. Former Board member Quentin Pittman comments:

“Casinos are a continuing issue in many different organizations. I would have been in favour. It was relevant to the fact that we were dealing daily with people who had dependencies, and certainly gambling is one. I likely even volunteered for them. If you have kids, you worked too many casinos to remember.” 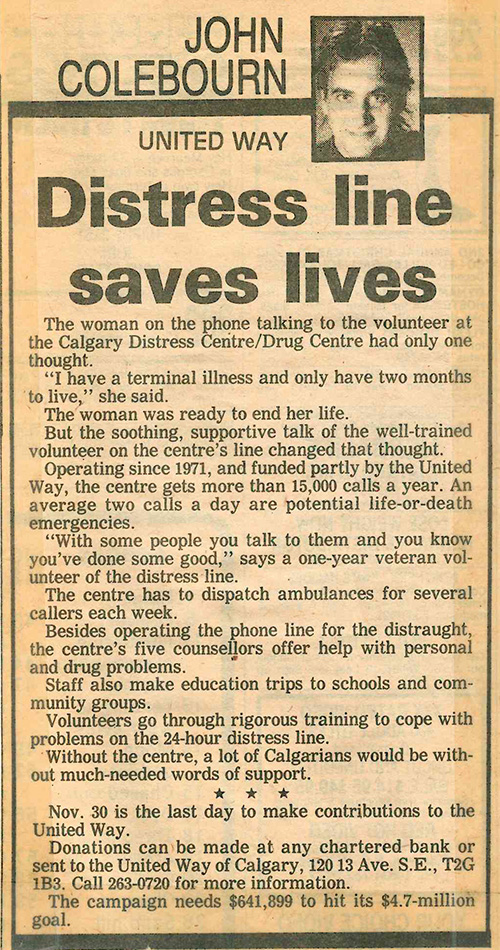 A United Way representative seeks donations for their 1983 United Way campaign. Distress Centre benefited from this campaign in 1983 and we still do today.

The September 1983 Board Retreat featured Neil Webber, Minister of Social Services. Topics included funding, visibility, adverse publicity, staff turnover, role of the Board, and the sudden proliferation of single- focus crisis lines. They included the Salvation Army, Telecare which was also sponsored by a religious group, smaller centres trying to provide services on their own, and lines specifically for run-aways and missing persons.

Funding in the late 80s

Data reported a 4% increase from the United Way, and ongoing requests to City for funding parity, such that when FCSS got a 30% increase from province, receiving agencies would get the same. An FCSS agreement was signed for 1986, stipulating Board members could not use their position for contracts, that the City must be made aware of significant decisions, and be absolved of all malpractice. FCSS in turn granted one-time only funding for salary bonuses, as well as computer and relocation costs.

The Board conducted a client profile, receiving feedback that the location was good, and that most clients could not afford to pay for service. A new Board Manual in 1988 gave overall responsibility to the Board for management and control, determining general and personnel policies, providing for construction and improvement of physical facilities, administering public and private funds, and investing or borrowing money. It was a strong attempt to become more of a policy-making board, with a focus on public relations the goal for 1988.

Former Chair Ernie Hagel remembers the 80’s from a Board point of view:

“I learned lots; it was a good board. I learned how difficult a lot of people have it in our community. You might see a little in the newspaper, or hear a few things, but you don’t realize how many people are phoning because they are in trouble. Understanding that not everybody has a business mentality, I learned lots about how other people do things, and that there is good on both sides of it.”