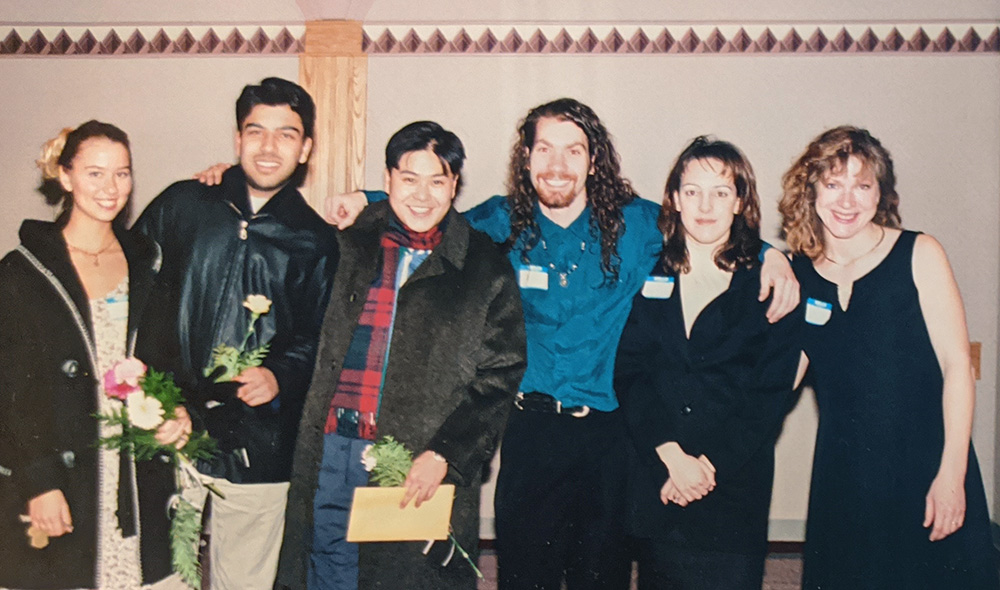 The Teen Line was still going strong in 1990/91 with a new 264-TEEN phone number and almost 5000 calls being answered by 28 volunteers (average age 18.5). Public education delivered by staff and volunteers included youth and parent presentations, as well as school and mall displays.

“I could relate to what the teenagers were going through with school, relationships, break ups, or family issues. You had the opportunity to speak to someone who was close to your own age, who had gone through it, could understand it with a different perspective than an adult could provide.

''You had the opportunity to speak to someone who was close to your own age, who had gone through it, could understand it with a different perspective than an adult could provide.'' - Krista Moroz

“The training was with the adult crisis line volunteers. When they brought in mentors to supervise and support, or run through scenarios, it was teen line volunteers. Once you were actually on the phone training, you were working on the teen line with a mentor volunteer sitting and listening. In the early days there was a youth drug line so we would refer drug calls to a drug line volunteer. It was better for callers to talk to someone who had experienced drug use themselves. Both lines were 24 hours, but outside of those hours the regular volunteers took the calls. The teen Line was 5-11 pm and I remember we had our own little room.”

In 1992, the Teen Program and Youth Drug Line were integrated into a combined Youth Program, complete with a new logo designed by a volunteer. When the National Kids Help Phone was introduced in 1993 calls lessened somewhat, but the Teen Line remained the first peer-to-peer talk line in country. 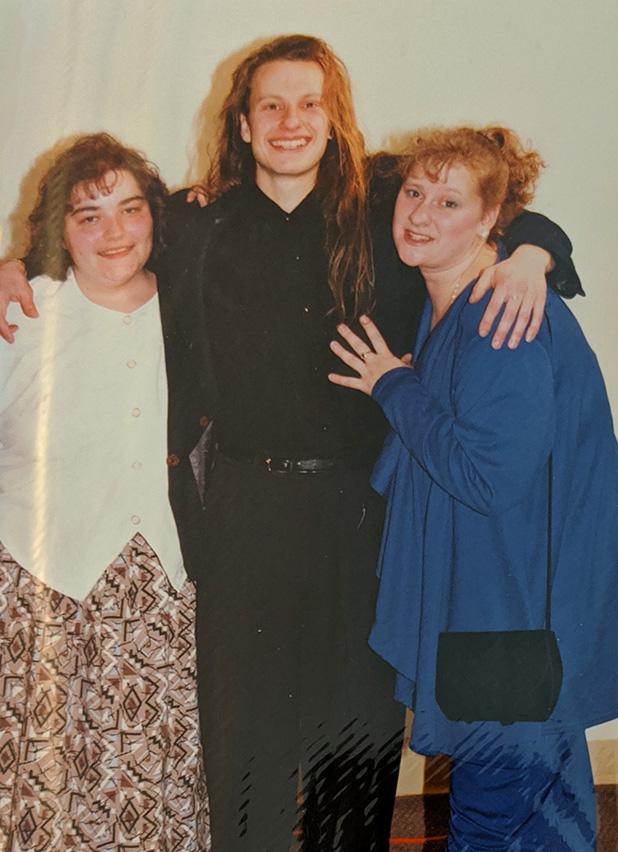 A 10-year anniversary reunion for past staff and volunteers was held along with a bikeathon on June 5, 1993. It was the Teen Line’s first effort at fundraising. Krista Green, one of the Teen Line Coordinators, recognized the over 100 volunteers who served in the ten years:

“The concept of teens helping teens has been a tremendous success for both callers and volunteers. Unlike any other crisis line, Teen Line gives Calgary’s teens the opportunity to talk about whatever is on their minds to another teen. Along with making new friends, the volunteers on the Teen Line gain experience and references for future careers.”

“The biggest change is in the number of calls about school violence. In the last six months there’s been a noticeable increase. And more guys seem to be calling now. I think they realize it is not such a sissy thing to do. A 10-year old girl phoned me and told me how her dad had been physically and sexually abusing her. She was obviously very, very upset and scared. And then her dad walked in. She hung up and I never heard from her again. I’ve never felt so helpless in all my life.”

''A 10-year old girl phoned me and told me how her dad had been physically and sexually abusing her. She was obviously very, very upset and scared. And then her dad walked in. She hung up and I never heard from her again. I’ve never felt so helpless in all my life.'' - Michelle, Volunteer

November 1994 brought the suicide of rocker Kurt Cobain. There was a string of copycat suicides in Canada, causing Diana Devlin-Burrows, Youth Program Supervisor at the time, to comment “You can say without a doubt that young people who are listening to some of that music are calling the lines and talking about suicide.”

1995 brought an additional on-call shift from 2-5 pm, to better respond to the youth calls coming in. Drug concerns were the largest issue, followed by relationships and parent-child conflict.

Youth issues in the ’90s

By, 1997, Kim Blight a counsellor told the Calgary Herald:

A photo from the Calgary Herald in the early ’90s.

“I think kids these days are growing up a lot faster. They are now having relationships much earlier… Relationship break-ups or failing to belong to the in-crowd can trigger calls to Distress Centre. If you don’t fit in, that is pretty devastating to kids. Divorces, fighting parents, blended families with step-parents, moving to a new place, and substance abuse problems have also generated calls.”

Parental expectations differing among cultures was an increasingly reported call line issue. Volunteer Ed wrote in the newsletter “Parents have learned to adapt but there are some things they won’t adapt to. In my culture (Korean) the father does take a dominant role.”

“Women are starting to assert themselves in my country but males are always treated differently. Marriage is what is expected of females. And because I understand such cultural differences, it’s been easy for me to relate to callers because I’ve been through what they are talking about.”

David Kirby, then a counsellor, comments on two of the Teen Line’s volunteers, now the well-known musicians Tegan and Sara:

“There was something special about those two kids. I remember working some shifts in the contact centre when they were there, and they were really keen, wanting to make a difference and help youth. They were really good on the lines. They were always working on their music in the quiet moments, writing songs and playing guitar. They were very bright, amazing kids. That was one of my highlights.” 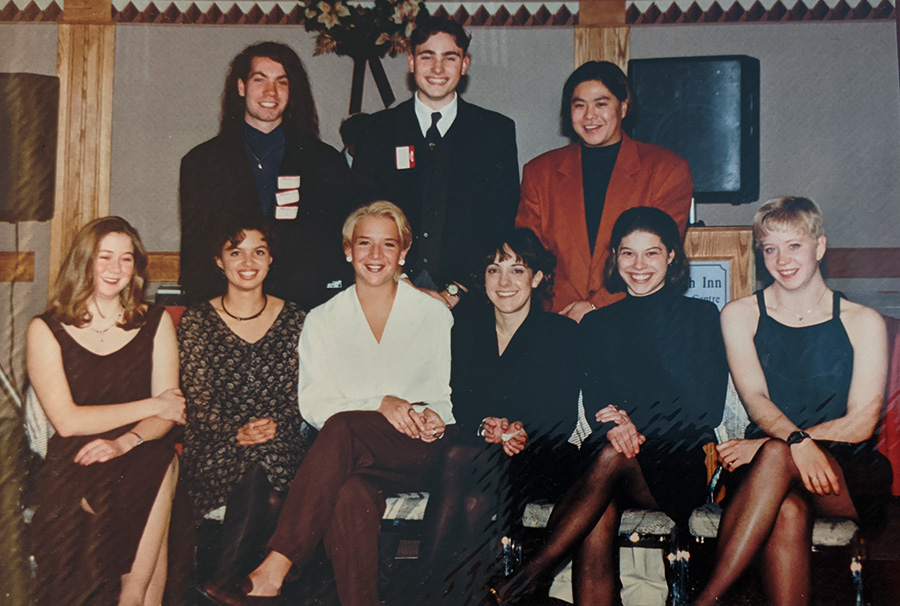 In 1997, the first blind peer counsellor was added to the volunteer team, with the assistance of the CNIB. A new multi-lingual service was implemented in March 1997. At the end of the decade, 24 volunteers with an average stay of over one year used nine languages to answer 4000 hours of calls, do 1700 hours of presentations, train and mentor other volunteers, and listen to other agency presentations eight times a year to stay current. After the Colorado school shootings and a more local Taber youth suicide, call numbers again increased.

Katie Black, counsellor and manager, reflects back on the teen programs:

“The first Teen Line phone was a plain, black desk-model with a rotary dial, and the first Teen Line display board was made of bright felt stapled onto particle board. Of course, not every call was a life-and-death crisis. Many were tales of poor report card marks, of favoured siblings, of unrequited love…I even remember discussing menu choices for a dinner date once.”

Krista Moroz provides the final reflection, based on her varied experiences with the Teen Line to 1999:

A picture from a 1994 newspaper article on the Youth Drug Line.

“I never felt as a volunteer that I wasn’t prepared or supported when answering the phones. There were always at least 2 Teen Line volunteers on, and any number of crisis line volunteers, depending on the shift. There was always support from a coordinator the following day if there had been a really difficult call.

“It gave me a lot of skills and confidence in talking to people. I got to do a lot of things in the coordinator role, presenting in schools, managing all the media relations. I did a lot of TV and newspaper interviews and I loved that part of my job. I wanted to do more communications work, in non-profit roles which then led me to communications, not law school, as I expected.”