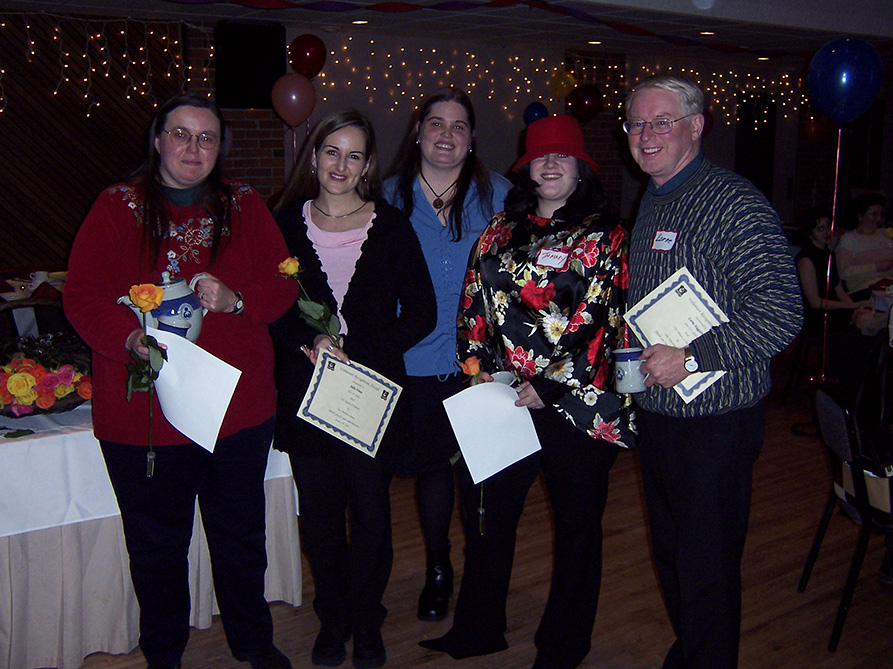 Despite many predictions, the world did not end at the start of 2000, and volunteers continued to be the heart and soul of Distress Centre. A Town Hall meeting was held to do an external review of the agency to assess Distress Centre’s strengths, challenges and opportunities. In his report, consultant Bill Overend, noted that Distress Centre had the largest number of volunteers of any major city crisis organization in Canada.

Burnout was identified as a concern, and Bill’s recommendations included increasing the number of volunteers to reduce individual commitments, start paying for midnight shifts, and alternate phone duties with fundraising.

The biggest change in the early 2000s was adding paid staff to the phone centre. Laura Pylypow, long time volunteer, remembers the “growing pains” of that time:

“A lot of the long-term volunteers really struggled to accept staff supervision. They were used to volunteering independently and viewed it as an intrusion rather than as support. I think it was an important transition from the grassroots origin of the agency to a more professional and clinical framework.”

Lorne Haggarty volunteered from 2000 to 2018, contributing thousands of hours, and winning or being nominated for multiple volunteer awards.

Lorne shares some of his experiences: 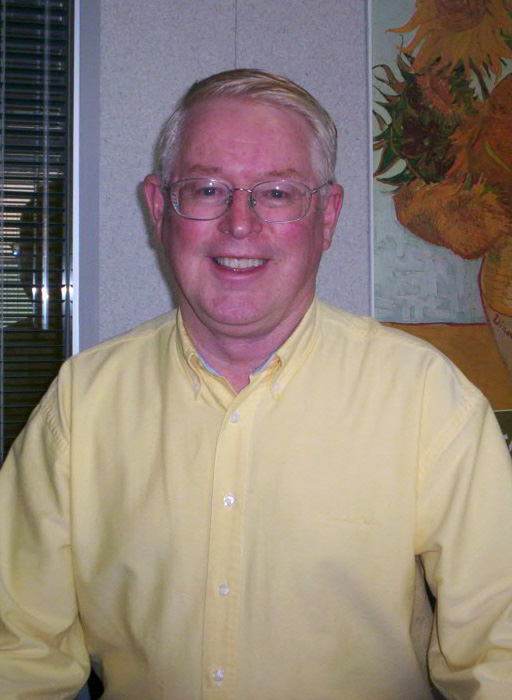 “I went to a Christmas party and a teenage boy was there. He was 16 or 17, and he told me he was a Teen Line volunteer at Distress Centre on Friday nights. I told my wife, that I found a place to volunteer at when I retire. I thought that if a 16-year-old kid was giving up his Friday nights, this must be some special place.

“When I started, it was the volunteer’s decision to send out police or EMS. Later the DC decided it would be the staff who would make the call to police. I had no problem with that. On one call, I asked: ‘Are you alone? Where are you? Do you have a gun? I am wondering if you could help me, do you think you could put that gun down? If you have a balcony, can you put the gun out there? It would make me feel more comfortable.’ I got the caller to put the gun on the balcony by the time the police got there.

“I learned not to discount the frequent callers. We may be the only person they speak to that day. When I first started, there was a whiteboard from floor to ceiling with the names of the 20 most frequent callers. Some of them are great storytellers and take a lot of your time.

“One morning a volunteer was in tears. She was a young girl wearing a hijab. A man had been phoning her with verbal attacks. I waited until he called again, and he started talking about how foreigners shouldn’t be in this country. I told him that individual was sitting 3 feet from me, and you showed her no respect. This call is over. He never called back. Then I proceeded to rebuild and support her.” 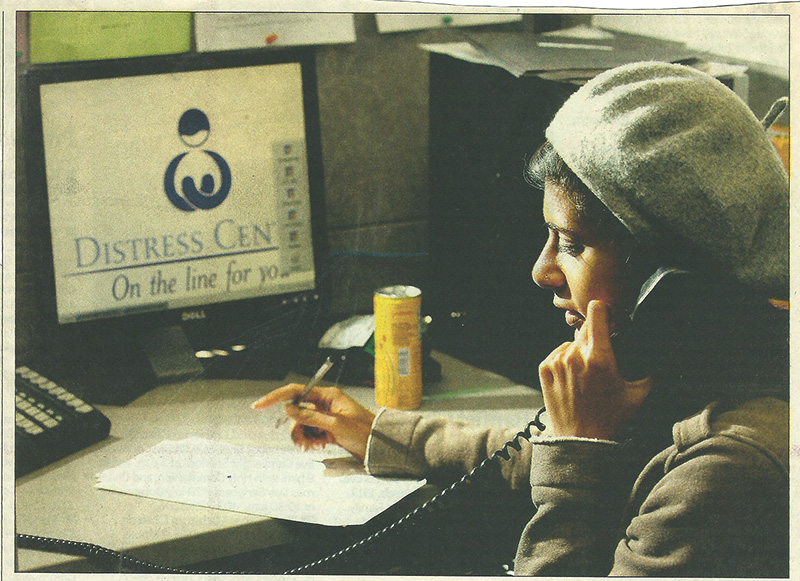 From a newspaper article on calls being more intense around the holidays in 2008/2009.

“If we had a high risk call, we just waved to staff. Later they started the flag system which was a little red Velcro flag that went on to the top of your cubicle, and that indicated the volunteer was on a high-risk call. The room would become quieter and staff would be watching to see if they needed to do a rescue.

''Later they started the flag system which was a little red Velcro flag that went on to the top of your cubicle, and that indicated the volunteer was on a high-risk call. The room would become quieter and staff would be watching to see if they needed to do a rescue.'' - Jessica Cope

“Adults would answer the TTY line, the Emergency Social Services line and Woods Crisis Response Team line. We always had to have someone on those lines so we were paid for those hours. I am not kidding when I say DC paid for my undergrad!

“I saw women taking leadership roles at DC and that gave me the confidence to move forward in my career, which is social work.”

A really positive change came with the formation of a Volunteer Advisory committee in December 2004, consisting of 13 volunteers from the crisis lines and one from Teen Line. Strategic planning, recruitment, social events, and policies were all part of the committee vision: Creating a communication link between volunteers and the greater Distress Centre community. 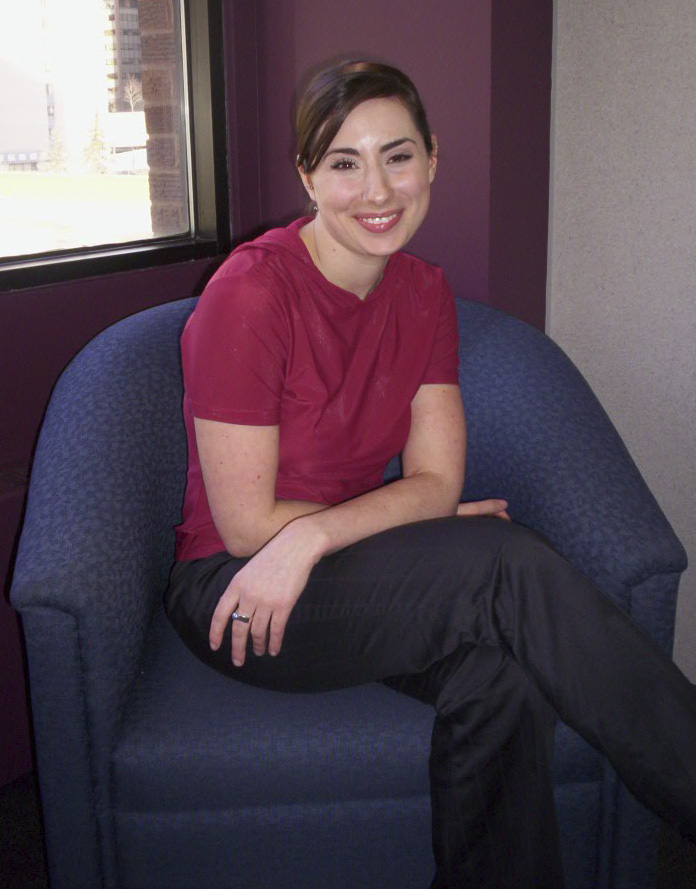 “I think they’re a little more emotionally laden than we would see at other times. The recent multi-person homicide scared a lot of people. It made them start reflecting on what was going on in their own lives, so people with concerns about their own mental health, about a family member or a friend’s mental health, were calling in asking questions on where to get help.”

September 2009 brought the launch of 1-800-Suicide in southern Alberta, answered by Distress Centre. Suicide attempts, homicidal thoughts and children-at-risk calls all increased significantly by the end of the decade and specific debriefing and self-care protocols were incorporated for volunteers.

Peta Glezerson was a crisis line and fundraising volunteer during these years:

“We had one week solid of training and difficult role plays. The discomfort makes you realize that not every call will be comfortable. 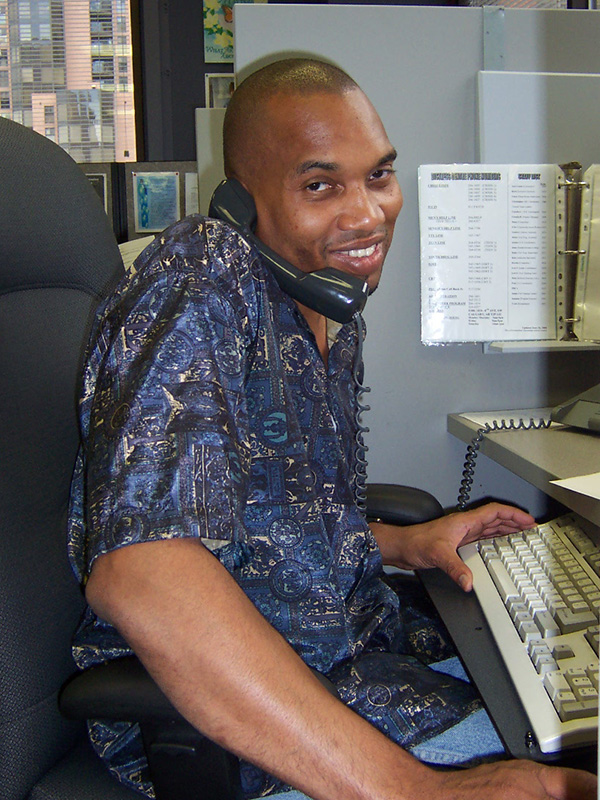 “A guy called who said he had cancer. His intention was to go to a cabin they had in the woods and just die. I asked him all the appropriate questions and he said he had no intention of letting his mother know … he didn’t want to make her worry. I said things like that is not right, it is not fair to your mother, and as I was saying all that, I realized that I was not listening to him. It was a very impactful call for me, because he was not asking me, he was telling me his plan. All I had to do was listen to him. I don’t know what he did and the not knowing is really hard.

“One guy called me when I was fairly new to Canada. He said ‘the bird is in the oven’, and I thought he got someone pregnant. Turned out he was a lonely man with no family, but he still went through the ritual of having Christmas and Easter dinner.

''(Volunteering) gives you a really good idea about the human suffering that is out there and that Distress Centre is always there to support them.'' - Peta Glezerson

“I always say that Distress Centre is arguably the most valuable and most rewarding volunteer experience I have ever had. I was very grateful to be able to help those people who needed support. That was the sadness, that there were people calling just to hear another voice on the line. It gives you a really good idea about the human suffering that is out there and that Distress Centre is always there to support them.”